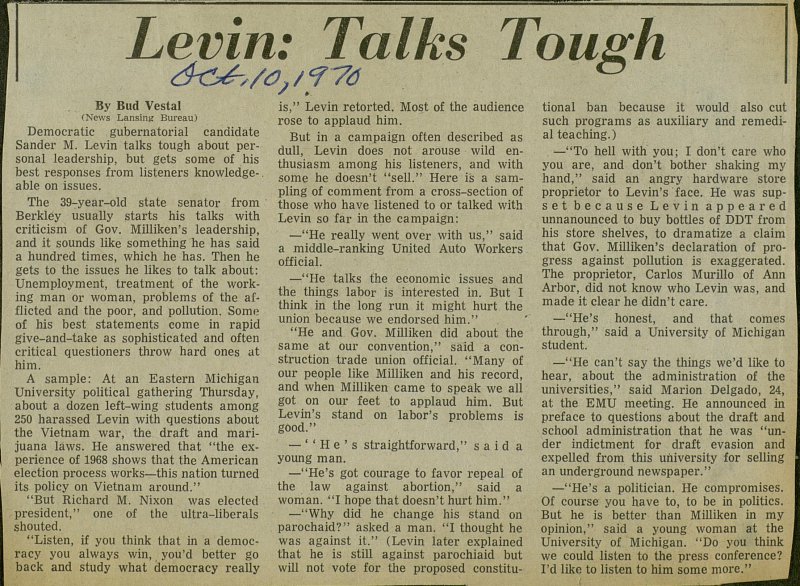 Democratic gubernatorial candidate Sander M. Levin talks tough about personal leadership, but gets some of his best responses from listeners knowledgeable on issues. The 39-year-old state senator from Berkley usually starts his talks with criticism of Gov. Milliken's leadership, and it sounds like something he has said a hundred times, which he has. Then he gets to the issues he likes to talk about: Unemployment, treatment of the working man or woman, problems of the afflicted and the poor, and pollution. Some of his best statements come in rapid give-and-take as sophisticated and often critical questioners throw hard ones at him. A sample: At an Eastern Michigan University political gathering Thursday, about a dozen left-wing students among 250 harassed Levin with questions about the Vietnam war, the draft and marijuana laws. He answered that "the experience of 1968 shows that the American election process works - this nation turned its policy on Vietnam around." "But Richard M. Nixon was elected president," one of the ultra-liberals shouted. "Listen, if you think that in a democracy you always win, you'd better go back and study what democracy really is," Levin retorted. Most of the audience rose to applaud him. But in a campaign often described as dull, Levin does not arouse wild enthusiasm among his listeners, and with some he doesn't "sell." Here is a sampling of comment from a cross-section of those who have listened to or talked with Levin so far in the campaign: - "He really went over with us," said a middle-ranking United Auto Workers official. - "He talks the economic issues and the things labor is interested in. But I think in the long run it might hurt the union because we endorsed him." "He and Gov. Milliken did about the same at our convention," said a construction trade union official. "Many of our people like Milliken and his record, and when Milliken came to speak we all got on our feet to applaud him. But Levin's stand on labor's problems is good." - ' ' He's straightforward," said a young man. - "He's got courage to favor repeal of the law against abortion," said a woman. "I hope that doesn't hurt him." - "Why did he change his stand on parochaid?" asked a man. "I thought he was against it." (Levin later explained that he is still against parochiaid but will not vote for the proposed constitutional ban because it would also cut such programs as auxiliary and remedial teaching.) - "To hell with you; I don't care who you are, and don't bother shaking my hand," said an angry hardware store proprietor to Levin's face. He was upset because Levin appeared unnanounced to buy bottles of DDT from his store shelves, to dramatize a claim that Gov. Milliken's declaration of progress against pollution is exaggerated. The proprietor, Carlos Murillo of Ann Arbor, did not know who Levin was, and made it clear he didn't care. - "He's honest, and that comes through," said a University of Michigan student. - "He can't say the things we'd like to hear, about the administration of the universities," said Marion Delgado, 24, at the EMU meeting. He announced in preface to questions about the draft and school administration that he was "under indictment for draft evasion and expelled from this university for selling an underground newspaper." - "He's a politician. He compromises. Of course you have to, to be in politics. But he is better than Milliken in my opinion," said a young woman at the University of Michigan. "Do you think we could listen to the press conference? I'd liko to listen to him some more."