Students' Strike At EMU Appears To Be Growing 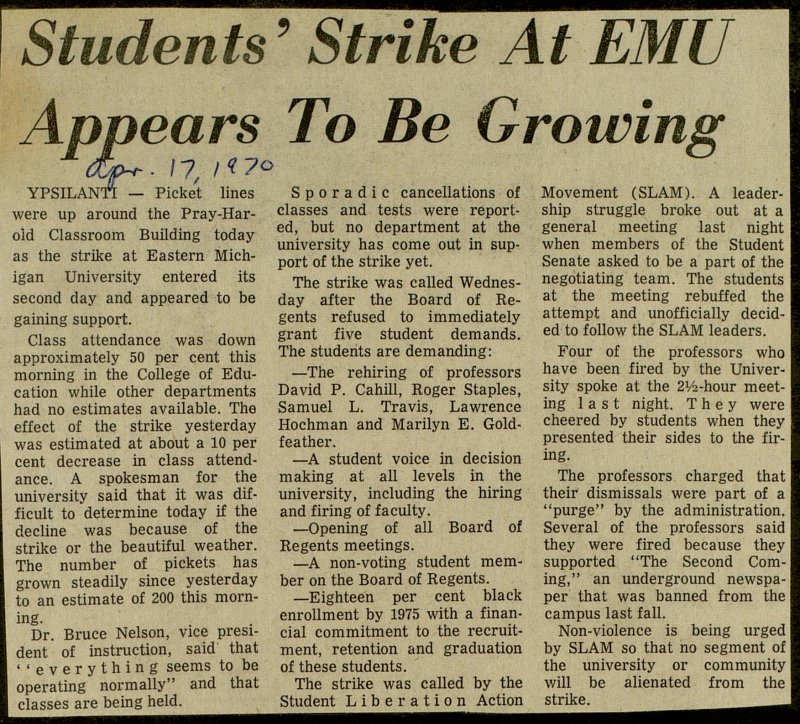 YPSILANTI - Picket lines were up around the Pray-Harold Classroom Building today as the strike at Eastern Michigan University entered its second day and appeared to be gaining support. Class attendance was down approximately 50 per cent this morning in the College of Education while other departments had no estimates available. The effect of the strike yesterday was estimated at about a 10 per cent decrease in class attendance. A spokesman for the university said that it was difficult to determine today if the decline was because of the strike or the beautiful weather. The number of pickets has grown steadily since yesterday to an estímate of 200 this morning. Dr. Bruce Nelson, vice president of instruction, said that ''everything seems to be operating normally" and that classes are being held. S p o r a d i c cancellations of classes and tests were reported, but no department at the university has come out in support of the strike yet. The strike was called Wednesday after the Board of Regents refused to immediately grant five student demands. The students are demanding: - The rehiring of professors David P. Cahill, Roger Staples, Samuel L. Travis, Lawrence Hochman and Marilyn E. Goldfeather. - A student voice in decisión making at all levéis in the university, including the hiring and firing of faculty. -Opening of all Board of Regents meetings. - A non-voting student member on the Board of Regents. - Eighteen per cent black enrollment by 1975 with a financial commitment to the recruitment, retention and graduation of these students. The strike was called by the Student Liberation Action Movement (SLAM). A leadership struggle broke out at a general meeting last night when members of the Student Senate asked to be a part of the negotiating team. The students at the meeting rebuffed the attempt and unofficially decided to follow the SLAM leaders. Four of the professors who have been fired by the University spoke at the 2V2-hour meeting last night. T h e y were cheered by students when they presented their sides to the firing. The professors charged that their dismissals were part of a "purge" by the administration. Several of the professors said they were fired because they supported "The Second Coming," an underground newspaper that was banned from the campus last fall. Non-violence is being urged by SLAM so that no segment of the university or community will be alienated from the strike. ____