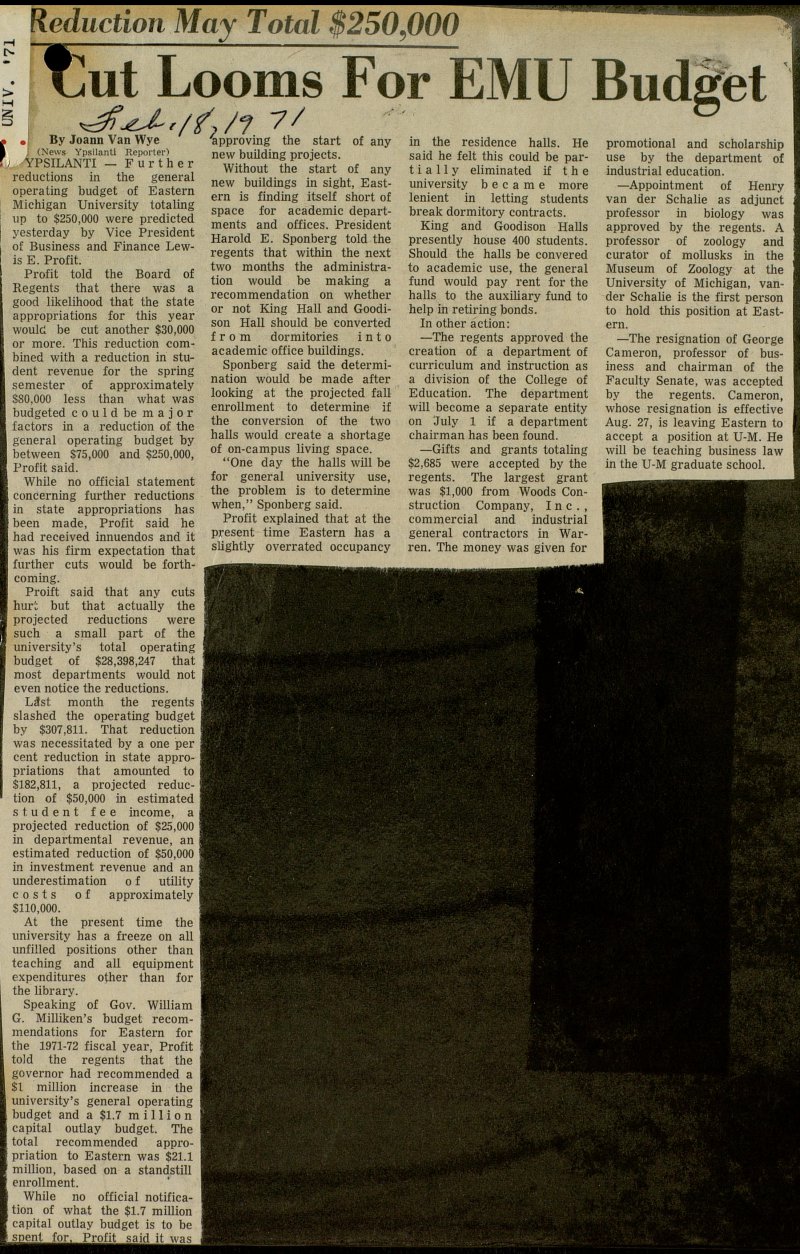 YPSILANTI - Further reductions in the general operating budget of Eastern Michigan University totaling up to $250,000 were predicted yesterday by Vice President of Business and Finance Lewis E. Profit. Profit told the Board of Regents that there was a good likelihood that the state appropriations for this year would be cut another $30,000 or more. This reduction combined with a reduction in student revenue for the spring semester of approximately SS0.000 less than what was budgeted couldbe major factors in a reduction of the general operating budget by between $75,000 and $250,000, Profit said. While no official statement concerning further reductions in state appropriations has I been made, Profit said he had received innuendos and it was his firm expectation that further cuts would be fortheoming. Proift said that any cuts hurt but that actually the projected reductions were such a small part of the university's total operating budget of $28,398,247 that most departments would not even notice the reductions. Lást month the regents slashed the operating budget by $307,811. That reduction was necessitated by a one per cent reduction in state appropriations that amounted to $182,811, a projected reduction of $50,000 in estimated student fee income, a projected reduction of $25,000 in departmental revenue, an estimated reduction of $50,000 in investment revenue and an underestimation o f utility c o s t s of approximately $110,000. At the present time the university has a freeze on all unfilled positions other than teaching and all equipment expenditures other than for the library. Speaking of Gov. William G. Milliken's budget recommendations for Eastern for the 1971-72 fiscal year, Profit told the regents that the governor had recommended a $1 million increase in the university's general operating budget and a $1.7 million capital outlay budget. The total recommended appropriation to Eastern was $21.1 million, based on a standstill enrollment. While no official notification of what the $1.7 million capital outlay budget is to be spent for, Profit said it was ) f f ' approving the start of any new building projects. Without the start of any new buildings in sight, Eastern is finding itself short of space for academie departments and offices. President Harold E. Sponberg told the regents that within the next two months the administration would be making a recommendation on whether or not King Hall and Goodison Hall should be converted f r o m dormitories i n t o academie office buildings. Sponberg said the determination would be made after looking at the projected fall enrollment to determine if the conversión of the two halls would créate a shortage of on-campus living space. "One day the halls will be for general university use, the problem is to determine when," Sponberg said. Profit explained that at the present time Eastern has a slightly overrated occupancy in the residence halls. He said he feit this could be part i a 1 1 y eliminated if the university b e c a m e more lenient in letting students break dormitory contracts. King and Goodison Halls presently house 400 students. Should the halls be convered to academie use, the general fund would pay rent for the halls to the auxiliary fund to help in retiring bonds. In other action: -The regents approved the creation of a department of curriculum and instruction as a división of the College of Education. The department will become a Separate entity on July 1 if a department chairman has been found. - Gifts and grants totaling $2,685 were accepted by the regents. The largest grant was $1,000 f rom Woods Construction Company, Inc., commercial and industrial general contractors in Warren. The money was given for promotional and scholarship use by the department of industrial education. - Appointment of Henry van der Schalie as adjunct professor in biology was approved by the regents. A professor of zoology and curator of mollusks in the Museum of Zoology at the University of Michigan, vander Schalie is the first person to hold this position at Eastern. -The resignation of George Cameron, professor of business and chairman of the Faculty Senate, was accepted by the regents. Cameron, whose resignation is effective Aug. 27, is leaving Eastern to accept a position at U-M. He will be teaching business law in the U-M gradúate school.