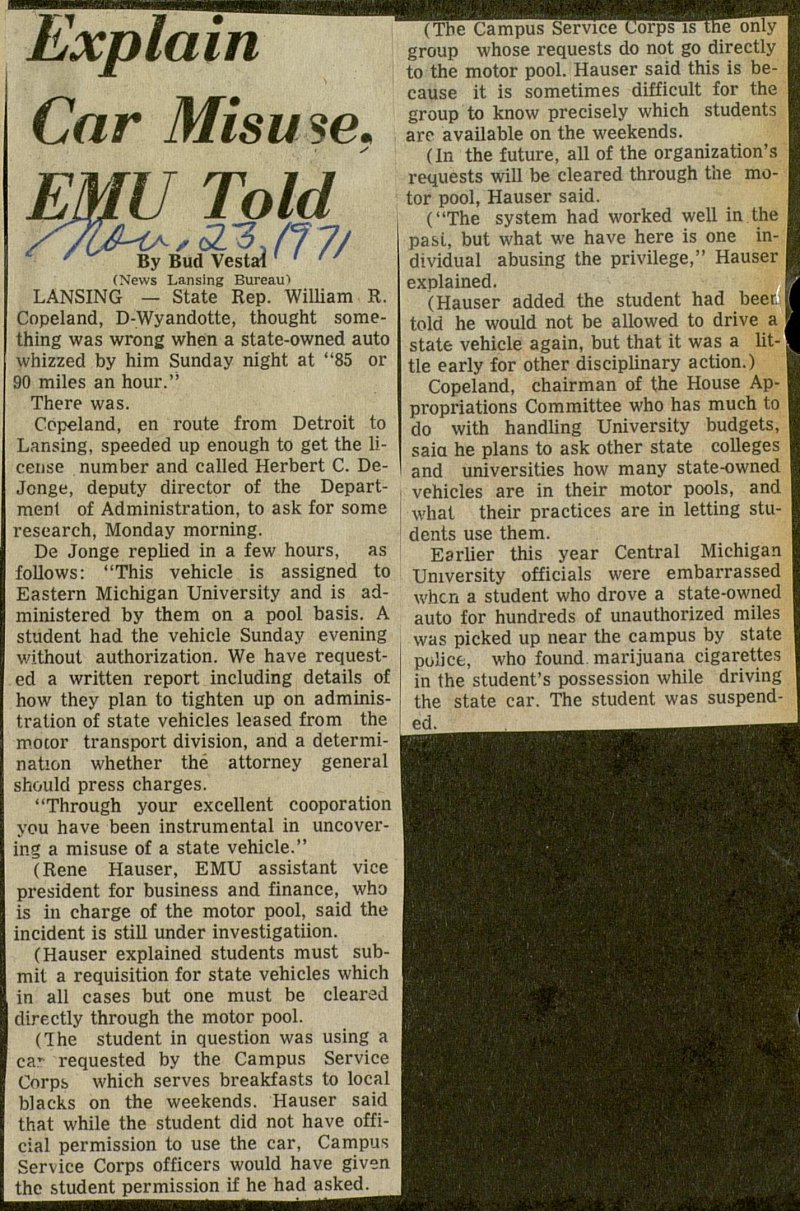 LANSING - State Rep. William R. Copeland, D-Wyandotte, thought something was wrong when a state-owned auto whizzed by him Sunday night at "85 or 90 miles an hour." There was. Copeland, en route from Detroit to Lansing, speeded up enough to get the liceuse number and called Herbert C. DeJonge, deputy director of the Department of Administration, to ask for some research, Monday morning. De Jonge replied in a few hours, as follows: "This vehicle is assigned to Eastern Michigan University and is administered by them on a pool basis. A student had the vehicle Sunday evening without authorization. We have requested a written report including details of how they plan to tighten up on administration of state vehicles leased from the motor transport division, and a determination whether thé attorney general should press charges. "Through your excellent cooporation you have been instrumental in uncovering a misuse of a state vehicle." (Rene Hauser, EMU assistant vice president for business and finance, who is in charge of the motor pool, said the incident is still under investigatiion. (Hauser explained students must submit a requisition for state vehicles which in all cases but one must be cleared directly through the motor pool. (The student in question was using a requested by the Campus Service Corp which serves breakfasts to local blacks on the weekends. Hauser said that while the student did not have official permission to use the car, Campus Service Corps officers would have given the student permission if he had asked. (The Campus Service Corps is the only group whose requests do not go directly to the motor pool. Hauser said this is because it is sometimes difficult for the group to know precisely which students are available on the weekends. (In the future, all of the organization's requests will be cleared through the motor pool, Hauser said. ("The system had worked well in the past, but what we have here is one individual abusing the privilege," Hauser explained. (Hauser added the student had been told he would not be allowed to drive a state vehicle again, but that it was a little early for other disciplinary action.) Copeland, chairman of the House Appropriations Committee who has much to do with handling University budgets, says he plans to ask other state colleges and universities how many state-owned vehicles are in their motor pools, and what their practices are in letting students use them. Earlier this year Central Michigan University officials were embarrassed whcn a student who drove a state-owned auto for hundreds of unauthorized miles was picked up near the campus by state police, who found marijuana cigarettes in the student's possession while driving the state car. The student was suspended.