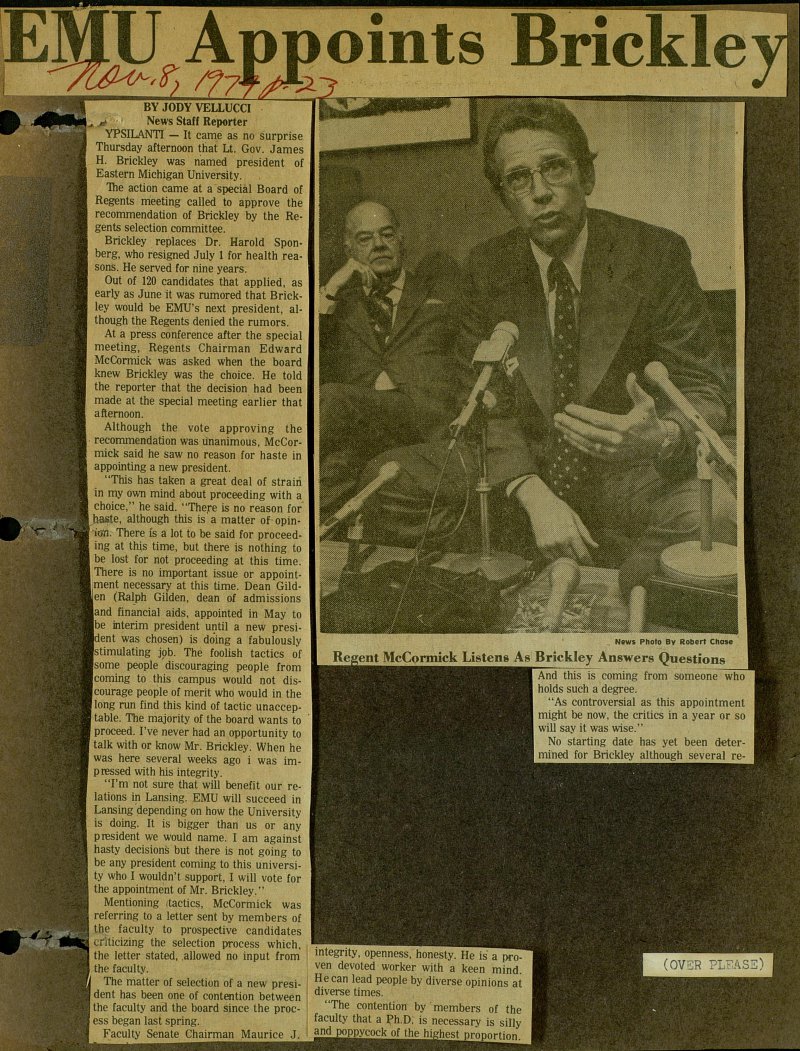 YPSILANTI - It carne as no surprise Thursday anemoon that Lt. Gov. James H. Brickley was named president of Eastern Michigan University. The action came at a special Board of Regents meeting called to approve the recommendation of Brickley by the Regents selection committee. Brickley replaces Dr. Harold Sponberg, who resigned July 1 for health reasons. He served for nine years. Out of 120 candidates that applied, as early as June it was rumored that Brickley would be EMU's next president, although the Regents denied the rumors. At a press conference after the special meeting, Regents Chairman Edward McCormick was asked when the board knew Brickley was the choice. He told the reporter that the decisión had been made at the special meeting earlier that afternoon. Although the vote approving the recommendation was ünanimous, McCormick said he saw no reason for haste in appointing a new president. "This has taken a great deal of strairi in my own mind about proceeding with a choice," he said. "There is no reason for haste, although this is' a matter of-opinïgïi. There ís a lot to be said for proceeding at this time, but there is nothing to i be lost for not proceeding at this time. There is no important issue or appointment necessary at this time. Dean GildLen (Ralph Gilden, dean of admissions land financial aids, appointed in May to Ibe interim president until a new presiIdent was chosen) is do'ing a fabulously Istimulating job. The foolish tactics of Isome people discouraging people from Icoming to this campus would not discourage people of merit who would in the llong run find this kind of tactic unacceptable. The majority of the board wants to proceed. I've never had an opportunity to talk with or know Mr. Brickley. When he was here several weeks ago i was impressed with his integrity. "I'ffl not sure that will benefit our relations in Lansing. EMU will succeed in Lansing depending on how the University is doing. It is bigger than us or any president we would name. I am against hasty decisions but there is not going to be any president coming to this university who I wouldn't support, I will vote for the appointment of Mr. Brickley." Mentioning itactics, McCormick was referring to a letter sent by members of the faculty to prospective candidates crïticizing the selection process which, the letter stated, .allowed no input from the faculty. The matter of selection of a new president has been one of contention between the faculty and the board since the process began last spring. Faculty Senate Chairman Maurice J. integrity, openness, honestHei ven devoted worker with a keen mind. He can lead people by diverse opinions at I diverse times. "The contention by members of the faculty that a ?h.D, is necessary is silly oppycockonhehighest proportion And this is coming from someone who I holds such a degree. "As controversial as this appointment I might be now, the critics in a year or so I will say it was wise." No starting date has yet been dterI mined for Brickley although several reI EMD APP0INT3 BRICKLEY . . . the other candidates. He is coming in with a tremendous handicap. Many of the faculty feel quite upset and more than a little concerned aboutbeing excluded by the regente in the genuine selection process. The regents made no genuine and civil overtures to negotiate differences with us. They showed us they didn'tcare." Anderson said he would do everything he could to improve relations between the faculty and university and.hoped that Brickley would be interested in the faculty and would be open and civil. "It is a difficult period for the faculty and for the Board. I will do everything I can to foster understanding and genuine and improving cooperation between the President and faculty," he said. Members of the faculty picketed the Uctober Kegents' meeting, complaining that the organized faculty groups, such as the Senate and AAUP, had been excluded.' Three members of the faculty, although not representatives of the groups, did particípate in the early screening of 120 candidates. The board itself did the final screening and interviewing. At the press conference, when asked if he feit confident from the start he was front running candidate, Brickley said: he hadn't known anything except that he was nominated and then a month ago he was akded to come to campus to be interviewed as one of the final candidates. He promised to study the situation with the faculty and to work hard to 1 prove relations. In addition to being recommended by I such GOP, Brickley was recommended I for the EMU post by Democratie 1 tary of State Richard H. Austin and U.S. I Sen. Philip A. Hart. Brickley, a native of Flint, earned I bachelor of philosophy and law degrees I from the University of Detroit and al master's degree in public and 1 trative law from New York University. He is a former FBI agent, U.S. district I attorney, Detroit city councilman and I sistant Wayne County prosecutor. He was I elected lieutenant governor as Gov. I liam G. Milliken's running.rmate on the I Republican ticket in 1970. Earlier this I year he decided against running for I election. . I