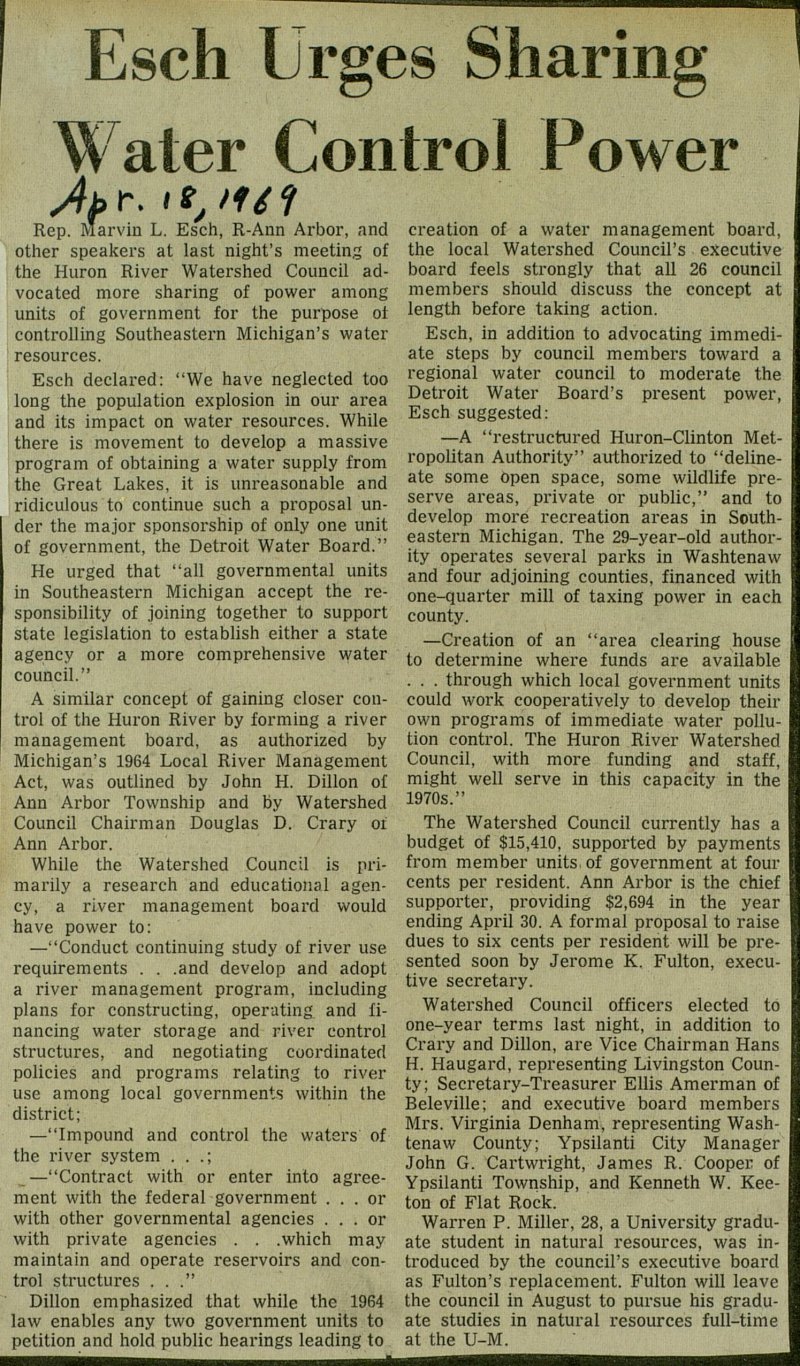 Rep. Marvin L. Esch, R-Ann Arbor, and other speakers at last night's meeting of the Huron River Watershed Council advocated more sharing of power among units of government for the purpose ot controlling Southeastern Michigan's water resources. Esch declared: "We have neglected too long the population explosión in our area and its impact on water resources. While there is movement to develop a massive program of obtaining a water supply from the Great Lakes, it is unreasonable and ridiculous to continue such a proposal under the major sponsorship of only one unit of government, the Detroit Water Board." He urged that "all governmental units in Southeastern Michigan accept the responsibility of joining together to support state legislation to establish either a state agency or a more comprehensive water council." A similar concept of gaining closer control of the Huron River by forming a river management board, as authorized by Michigan's 1964 Local River Management Act, was outlined by John H. Dillon of Ann Arbor Township and by Watershed Council Chairman Douglas D. Crary oí Ann Arbor. While the Watershed Council is primarily a research and educational agency, a river management board would have power to: - "Conduct continuing study of river use requirements . . .and develop and adopt a river management program, including plans for constructing, operating. and financing water storage and river control structures, and negotiating coordinated policies and programs relating to river use among local governments within the district; - "Impound and control the waters of the river system . . .; -"Contract with or enter into agreement with the federal government . . . or with other governmental agencies . . . or with private agencies . . .which may maintain and opérate reservoirs and control structures . . ." Dillon emphasized that while the 1964 law enables any two government units to petition and hold public hearings leading to creation of a water management board, the local Watershed Council's executive board feels strongly that all 26 council members should discuss the concept at length before taking action. Esch, in addition to advocating immediate steps by council members toward a regional water council to moderate the Detroit Water Board's present power, Esch suggested: - A "restructured Huron-Clinton Metropolitan Authority" authorized to "delinéate some open space, some wildlife preserve areas, private or public," and to develop more recreation areas in Southeastern Michigan. The 29-year-old authority operates several parks in Washtenaw and four adjoining counties, financed with one-quarter mili of taxing power in each county. - Creation of an "area clearing house to determine where funds are available . . . through which local government units could work cooperatively to develop their own programs of immediate water pollution control. The Hurón River Watershed Council, with more funding and staff, might well serve in this capacity in the 1970s." The Watershed Council currently has a budget of $15,410, supported by payments from member units of government at four cents per resident. Ann Arbor is the chief supporter, providing $2,694 in the year ending April 30. A formal proposal to raise dues to six cents per resident will be presented soon by Jerome K. Fulton, executive secretary. Watershed Council officers elected to one-year terms last night, in addition to Crary and Dillon, are Vice Chairman Hans H. Haugard, representing Livingston County; Secretary-Treasurer Ellis Amerman of Beleville; and executive board members Mrs. Virginia Denham, representing Washtenaw County; Ypsilanti City Manager John G. Cartwright, James R. Cooper of Ypsilanti Township, and Kenneth W. Keeton of Flat Rock. Warren P. Miller, 28, a University gradúate student in natural resources, was introduced by the council's executive board as Fulton's replacement. Fulton will leave the council in August to pursue his gradúate studies in natural resources full-time at the U-M.