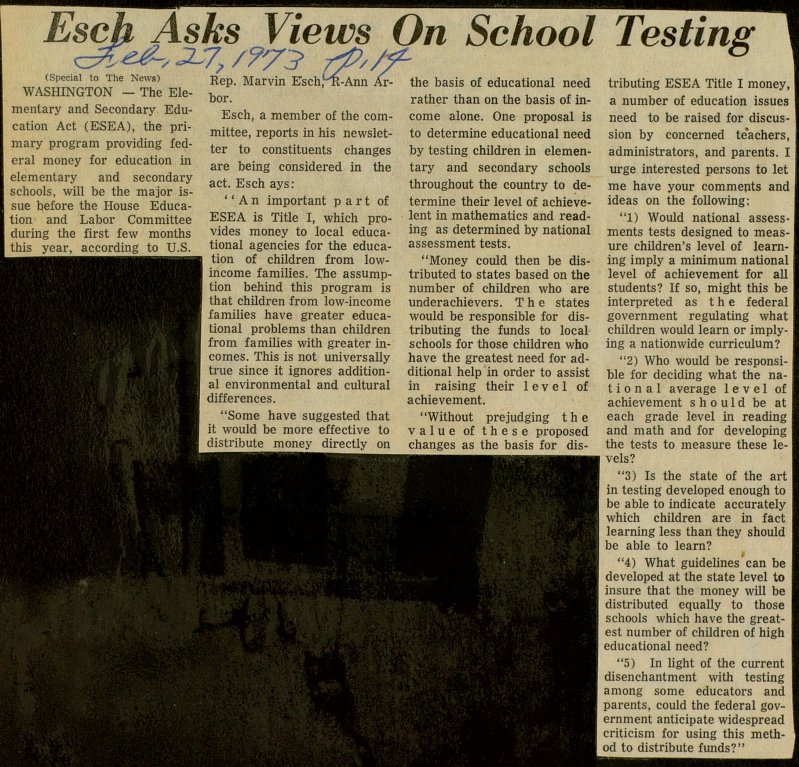 WASHINGTON - The Elementary and Secondary Education Act (ESEA), the primary program providing federal money for education in elementary and secondary schools, will be the major issue before the House Education and Labor Committee during the first few months this year, according to U.S. Rep. Marvin EschJ-'R-Ann Arbor. Esch, a member of the committee, reports in his newsletter to constituents changes are being considered in the act. Esch ays: ' ' A n important part of ESEA is Title I, which provides money to local educational agencies for the education of children from lowincome families. The assumption behind this program is that children from low-income families have greater educational problems than children from families with greater incomes. This is not universally true since it ignores additional environmental and cultural differences. "Some have suggested that it would be more effective to distribute money directly on the basis of educational need rather than on the basis of income alone. One proposal is to determine educational need by testing children in elementary and secondary schools throughout the country to determine their level of achievelent in mathematics and reading as determined by national assessment tests. "Money could then be distributed to states based on the number of children who are underachievers. The states would be responsible for distributing the funds to local schools for those children who have the greatest need for additional help in order to assist in raising their level of achievement. "Without prejudging the value of these proposed changes as the basis for tributing ESEA Title I money, a number of education issues need to be raised for discussion by concerned te'achers, administrators, and parents. I urge interested persons to let me have your eomments and ideas on the following: "1) Would national assessments tests designed to measure children's level of learning imply a minimum national level of achievement for all students? If so, might this be interpreted as the federal government regulating what children would learn or implying a nationwide curriculum? "2) Who would be responsible for deciding what the nat i o n a 1 average level of achievement s h o u 1 d be at each grade level in reading and math and for developing the tests to measure these levels? "3) Is the state of the art in testing developed enough to be able to indícate accurately which children are in fact learning less than they should be able to learn? "4) What guidelines can be developed at the state level to insure that the money will be distributed equally to those schools which have the greatest number of children of high educational need? "5) In light of the current disenchantment with testing among some educators and parents, could the federal government anticípate widespread criticism for using this method to distribute funds?" -