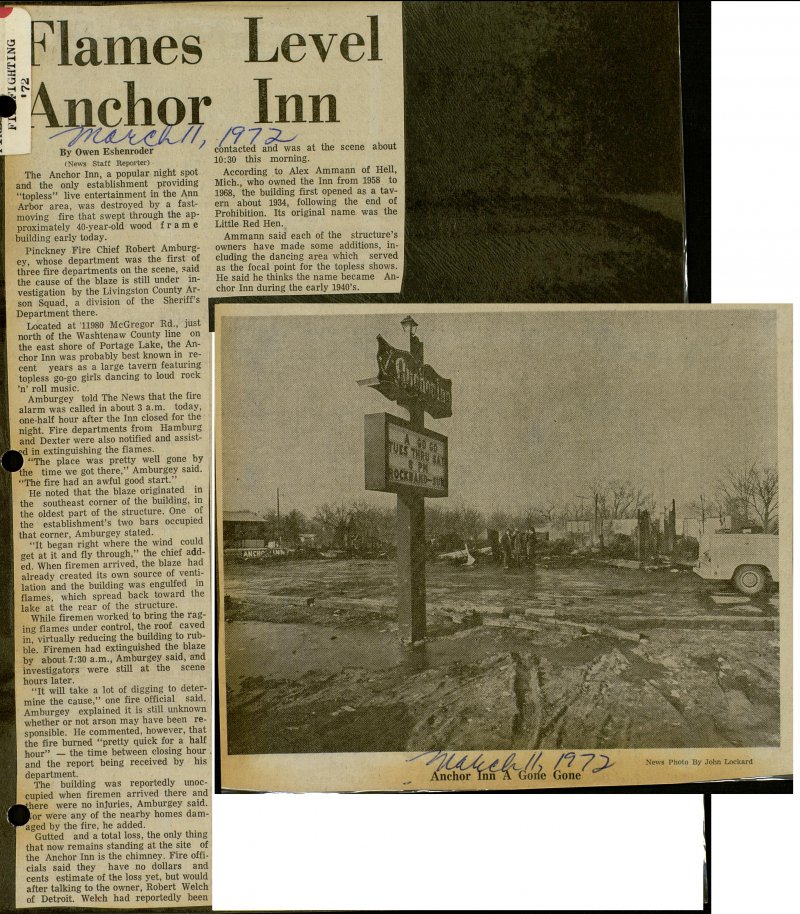 The Anchor Inn, a popular night spot and the only establishment providing "topless" live entertainment in the Ann Arbor area, was destroyed by a fastmoving fire that swept through the approximately 40-year-old wood frame building early today. Pinckney Fire Chief Robert Amburgey, whose department was the first of three fire departments on the scène, said the cause of the blaze is still under investigation by the Livingston County Arson Squad, a división of the Sheriff's I Department there. Located at 11980 McGregor Rd., just I north of the Washtenaw County line on the east shore of Portage Lake, the Anchor Inn was probably best known in recent years as a large tavern featunng topless go-go girls dancing to loud rock 'n' roll music. Amburgey told The News that the fire alarm was called in about 3 a.m. today, one-half hour after the Inn closed for the night. Fire departments from Hamburg and Dexter were also notified and assistd in extinguishing the flames. m "The place was pretty well gone by he time we got there," Amburgey said. I "The fire had an awful good start." He noted that the blaze originated in I the southeast corner of the building, m I the oldest part of the structure. One of I the establishment's two bars occupied I that corner, Amburgey stated. "It began right where the wind could I get at it and fly through," the chief addI ed. When firemen arrived, the blaze had I already created its own source of ventiI lation and the building was engulfed in I flames, which spread back toward the I lake at the rear of the structure. While firemen worked to bring the ragI ing flames under control, the roof caved in, virtually reducing the building to rubblè. Firemen had extinguished the blaze by about 7:30 a.m., Amburgey said, and I investigators were still at the scène I hours later. "It will take a lot of digging to deterI mine the cause," one fire official said. I Amburgey explained it is still unknown whether or not arson may have been reI sponsible. He commented, however, that the fire burned "pretty quick for a half I hour" - the time between closing hour . I and the report being received by his I department. The building was reportedly unocI cupied when firemen arrived there and lhere were no injuries, Amburgey said. IH'or were any of the nearby homes damliged by the fire, he added. Gutted and a total loss, the only thing that now remains standing at the site of the Anchor Inn is the chimney. Fire officials said they have no dollars and cents estímate of the loss yet, but would after talking to the owner, Robert Welch of Detroit. Wekh had reportedly been contacted and was at the scène about 10:30 this morning. According to Alex Ammann of Heil, Mich., who owned the Inn from 1958 to 1968, the building first opened as a tavern about 1934, following the end of Prohibition. lts original name was the Little Red Hen. Ammann said each of the structure's owners have made some additions, I cluding the dancing area which served I as the focal point for the topless shows. I He said he thinks the name became 1 chor Inn during the early 1940's. J