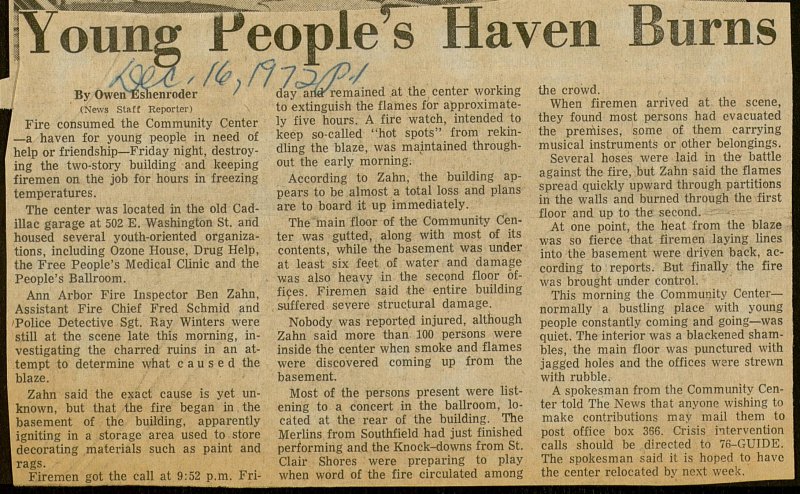 f Fire consumed the Community Center - a haven for young people in need of help or friendship- Friday night, destroying the two-story building and keeping firemen on the job for hours in freezing temperatures. The center was located in the old Cadillac garage at 502 E. Washington St. and housed several youth-oriented organizations, including Ozone House, Drug Help, the Free People's Medical Clinic and the People's Ballroom. Ann Arbor Fire Inspector Ben Zahn, Assistant Fire Chief Fred Schmid and 'Pólice Detective Sgt. Ray Winters were still at the scène late this morning, investigating the charred ruins in an attempt to determine what c a u s e d the blaze. Zahn said the exact cause is yet unknown, but that the fire began in the I basement of the building, apparently igniting in a storage area used to store I decorating materials such as paint and I rags. I Firemen got the cali at 9:52 p.m. 7 7 -DJ-" day an4remained at the center working to extinguish the flames fór approximately five hours. A fire watch, intended to keep so-called "hot spots" from rekindling the blaze, was maintained throughout the early morning; According to Zahn, the building appears to be almost a total loss and plans are to board it up immediately. The main floor of the Community Center was gutted, along with most of its contents, while the basement was under at least six feet of water and damage was also heavy in the second floor offices. Firemen said the entire building suffered severe structural damage. Nobody was reported injured, although Zahn said more than 100 persons were inside the center when smoke and flames were discovered coming up from the basement. Most of the persons present were listening to a concert in the ballroom, located at the rear of the building. The Merlins from Southfield had just finished performing and the Knock-downs from St. Clair Shores were preparing to play when word of the fire circulated among the crowd. When firemen arrived at the scène, they found most persons had evacuated the premises, some of them carrying musical instruments or other belongings. Several hoses were laid in the battle against the fire, but Zahn said the flames spread quickly upward through partitions in the walls and burned through the first floor and up to the second. At one point, the heat from the blaze was so fierce that firemen laying lines into the basement were driven back, according to reports. But finally the fire was brought under control. This morning the Community Center- normally a bustling place with young people constantly coming and going- was quiet. The interior was a blackened shambles, the main floor was punctured with jagged holes and the offices were strewn with rubble. A spokesman from the Community Center told The News that anyone wishing to make contributions may mail them to post office box 3S6. Crisis intervention calis should be directed to 76-GUIDE. The spokesman said it is hoped to have the center relocated by next week.