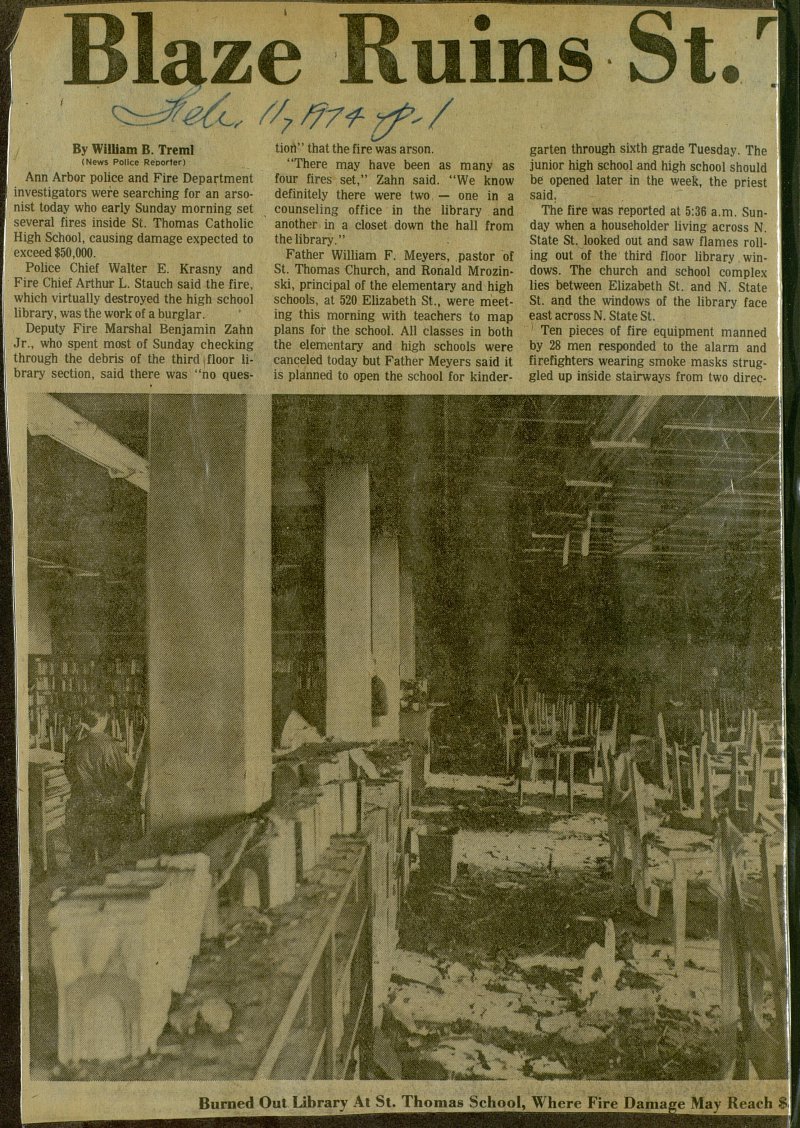 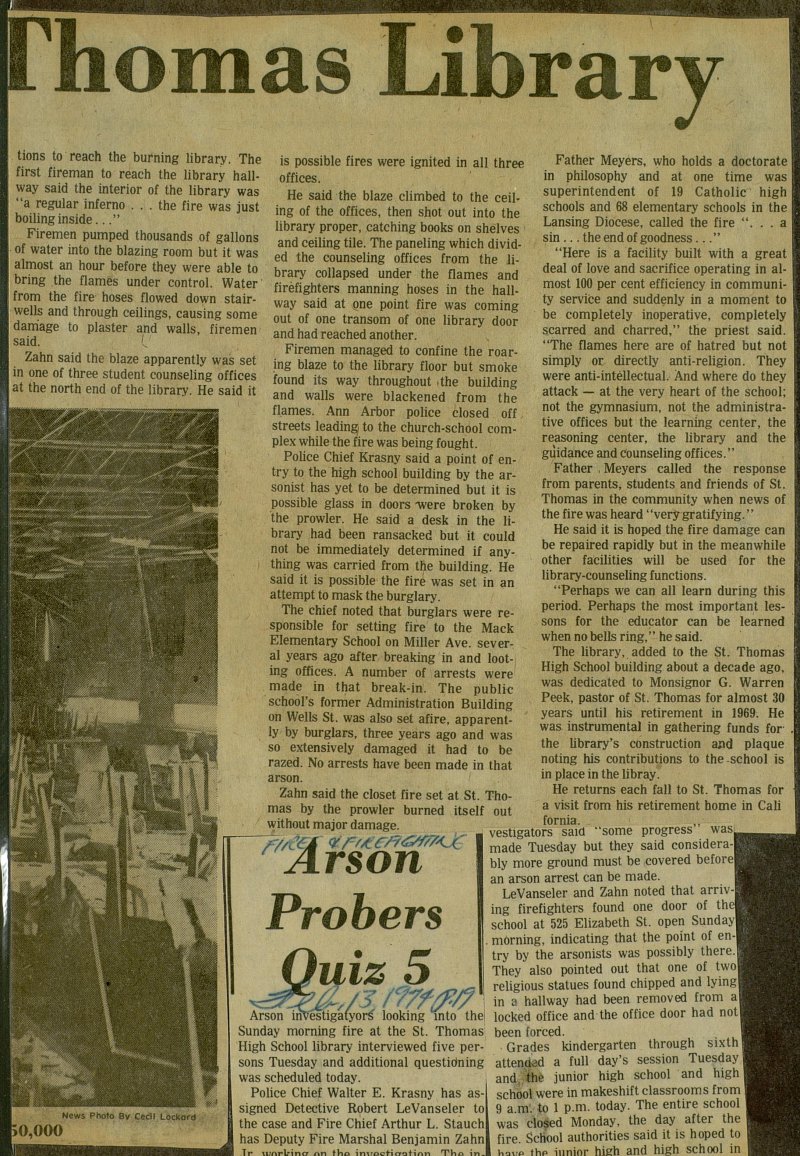 Ann Arbor pólice and Fire Department investigators were searching for an arsonist today who early Sunday morning set several fires inside St. Thomas Catholic High School, causing damage expected to exceed $50,000. Pólice Chief Walter E. Krasny and Fire Chief Arthur L. Stauch said the fire, which virtually destroyed the high school library, was the work of a burglar. Deputy Fire Marshal Benjamin Zahn Jr., who spent most of Sunday checking through the debris of the thirdifloor library section, said there was "no tion" that the fire was arson. "There may have been as many as four fires set," Zahn said. "We know definitely there were two - one in a counseling office in the library and another in a closet down the hall from the library." Father William F. Meyers, pastor of St. Thomas Church, and Ronald Mrozinski, principal of the elementary and high schools, at 520 Elizabeth St., were meeting this morning with teachers to map plans for the school. All classes in both the elementary and high schools were canceled today but Father Meyers said it is planned to open the school for garten through sixth grade Tuesday. The ! junior high school and high school should be opened later in the week, the priest said. The fire was reported at 5:36 a.m. Sunday when a householder living across N. State St. looked out and saw flames rolling out of the third floor library windows. The church and school complex lies between Elizabeth St. and N. State St. and the Windows of the library face east across N. State St. ' Ten pieces of fire equipment manned by 28 men responded to the alarm and firefighters wearing smoke masks struggled up in'side stairways from two ■ tions to reach the buming library. The first fireman to reach the library hallway said the interior of the library was "a regular inferno ... the fire was just boiling inside . . ." Firemen pumped thousands of gallons of water into the blazing room but it was almost an hour before they were able to bring the flames under control. Water from the fire hoses flowed down stairI wells and through ceilings, causing some darriage to piaster and walls, firemen said. (. Zahn said the blaze apparently was set in one of three student counseling offices at the north end of the library. He said it ■---■- ■■■■■■ - is possible fires were ignited in all three offices. He said the blaze climbed to the ceiling of the offices, then shot out into the library proper, catching books on shëlves and ceiling tile. The paneling which divided the counseling offices from the library collapsed under the flames and firèfighters manning hoses in the hallway said at one point fire was coming out of one transom of one library door and had reached another. Firemen managed to confine the roaring blaze to the library floor but smoke found its way throughout .the building and walls were blackened from the flames. Ann Arbor pólice closed off streets leading) to the church-school complex while the fire was being fought. Pólice Chief Krasny said a point of entry to the high school building by the arsonist has yet to be determined but it is possible glass in doors -were broken by the prowler. He said a desk in the library had been ransacked but it could not be immediately determined if anything was carried from the building. He said it is possible the firé was set in an attempt to mask the burglary. The chief noted that burglars were responsible for setting fire to the Mack Elementary School on Miller Ave. sev eral years ago after breaking in and looting offices. A number of arrests were made in that break-in. The public school's former Administration Building on Wells St. was also set afire, apparently by burglars, three years ago and was so extensively damaged it had to be razed. No arrests have been made in that arson. Zahn said the closet fire set at St. Thomas by the prowler burned its elf out without major damage. Father Meyers, who holds a doctórate in philosophy and at one time was superintendent of 19 Catholic high schools and 68 elementary schools in the Lansing Diocese, called the fire ". . . a sin ... the end of goodness ..." "Here is a facility built with a great deal of love and sacrifice operating in almost 100 per cent efficiency in community service and suddenly in a moment to be completely inoperative, completely scarred and charred," the priest said. "The flames here are of hatred but not simply or directly anti-religion. They were anti-intèllectual. And where do they attack - at the very heart of the school; not the gymnasium, not the administrative offices but the learning center, the reasoning center, the library and the güidance and counseling offices." Father , Meyers called the response from parents, students and friends of St. Thomas in the community when news of the fire was heard "verygratifying." He said it is hoped the fire damage can be repaired rapidly but in the meanwhile other facilities will be used for the library-counseling functions. "Perhaps we can all learn during this period. Perhaps the most important lessons for the educator can be learned when no bells ring," he said. The library, added to the St. Thomas High School building about a decade ago, was dedicated to Monsignor G. Warren Peek, pastor of St. Thomas for almost 30 years until his retirement in 1969. He was instrumental in gathering funds for . the library's construction and plaque noting his contributions to the. school is in place in the libray. He returns each fall to St. Thomas for a visit from his retirement home in Cali fornia.