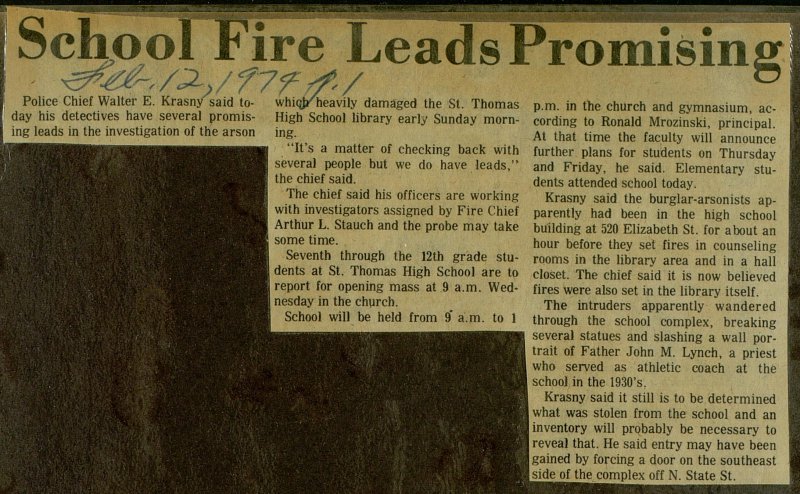 Pólice Chief Walter E. Krasny said today his detectives have several promising leads in the investigation of the arson . whiqjheavily damaged the St. Thomas High School library early Sunday morning. i "It's a matter of checking back with several people but we do have leads," the chief said. The chief said his officers are working with investigators assigned by Fire Chief Arthur L. Stauch and the probe may take some time. Seventh through the 12th grade stuI dents at St. Thomas High School are to i report for opening mass at 9 a.m. WedI nesday in the church. School will be held from 9" a.m. to 1 I p.m. in the church and gymnasium, according to Ronald Mrozinski, principal. At that time the faculty will announce further plans for students on Thursday and Friday, he said. Elementary students attended school today. Krasny said the burglar-arsonists apparently had been in the high school building at 520 Elizabeth St. for about an hour before they set fires in counseling rooms in the library area and in a hall closet. The chief said it is now believed fires were also set in the library itself. The intruders apparently wandered through the school complex, breaking I several statues and slashing a wall I trait of Father John M. Lynch, a priest I who served as athletic coach at thé school in the 1930's, Krasny said it still is to be determined what was stolen from the school and an inventory will probably be necessary to reveal that. He said entry may have been I gained by forcing a door on the southeast side of the complex off N. State St.