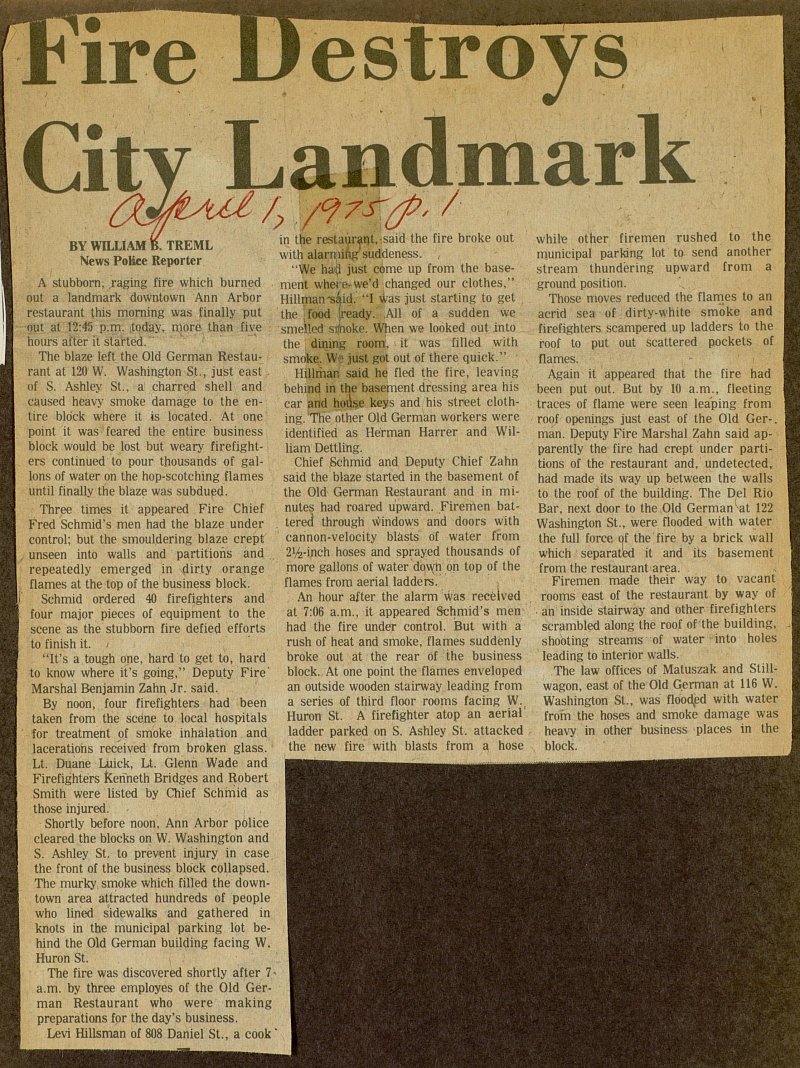 A stubborn, ,raging fire which burned out a landmark downtown Arm Arbor restaurant this morning was finally put out at 12:45 p.m. itoday, more than five hours after it started. The blaze left the Old German Restaurant at 120 W. Washington St., just east , l of S. Ashley St., a charred shell and i caused heavy smoke damage to the entire bldck where it is located. At one point it was feared the entire business block would be lost but weary firefighters continued to pour thousands of gallons of water on the hop-scotching flames until finally the blaze was subdued. Three times it appeared Fire Chief Fred Schmid's men had the blaze under control; but the smouldering blaze crept I . unseen into walls and partitioñs and repeatedly emerged in dirty orange I flames at the top of the business block. i' Schmid ordered 40 firefighters and I four major pieces of equipment to the ■ scène as the stubborn fire defied efforts to finish it. i ■ "It's a tough one, hard to get to, hard to know where it's going," Deputy Fire' Marshal Benjamin Zahn, Jr. said. ■ By noon, four firefighters had been taken from the scène to local hospitals ' for treatment of smoke inhalation and lacerations received from broken glass. Lt. Duane Luick, Lt. Glenn Wade and I Firefighters Kerïneth Bridges and Robert I Smith were listed by Chief Schmid as those injured. - Shortly before noon, Ann Arbor pólice I cleared the blocks on W. Washington and S. Ashley St. to prevent injury in case the front of the business block collapsed. The murky smoke which filled the downtown area attracted hundreds of people who lined sidewalks and gathered in ■ knots in the municipal parking lot behind the Oíd Germán building facing W. Huron St. The fire was discovered shortly after 7 a.m. by three employés of the Old German Restaurant who were making I preparations fpr the day's business. I Levi Hillsman of 808 Daniel St., a cook " in the restaurant, said the fire broke out with alarming'suddeness. , "We haijl just cöme up f rom the basement wheie-we'd changed our clothes," Hillman-sáid. "I was just starting to get the ;food jready. All of a sudden we smehed sflhoke. When we looked out into the dining room, it was filled with smoke. We just got out of there quick." Hulmán said he fled the fire, leaving behind in the basement dressing area his car and house keys and his street clothing. The other Oíd Germán workers were identified as Hérman Harrer and William Dettling. Chief Schmid and Deputy Chief Zahn said the blaze started in the basement of the Oíd Germán Restaurant and in minutes had roared upwárd. Firemen battered through Windows and doors with cannon-velocity blásts of water from 2%-inch hoses and sprayed thousands of more gallons of water dbw,n on top of the flames from aerial ladders. An hour after the alarm was recêlved at 7:06 a.m., it appeared Schmid's men had the fire under control. But with a rush of heat and smoke, flames suddenly broke out at the rear óf the business block. At one point the flames enveloped an outside wooden stairway leading from a series of third floor rooms facing W. Hurón St. A firefighter atop an aerial' ladder parked on S. Ashley St. attacked , the new fire with blasts from a hose while other firemen rushed to the municipal parking lot to send another stream thundëring upward from a ground position. Those moves reduced the flames to an acrid sea of dirty-white smoke and I firefighters scampered up ladders to the I roof to put out scattered pockets of I flames. I Again il appeared that the fire had been put out. But by 10 a.m., fleeting I traces of flame were seen lea'ping from roof openings just east of the Old Ger-. I man. Deputy Fire Marshal Zahn said ] parently the fire had crept under ] tions of the restaurant and, undetected, had made its way up between the walls to the roof of the building. The Del Rio I Bar, next door to the Old Germán -at 122 Washington St., were flooded with water the full force of the fire by a brick wall I which ! separated it and its basement from the restaurant area. Firemen made their way to vacant rooms east of the restaurant by way of ■ an inside stairway and other firefighters scrambled along the roof of the building, - shooting streams of water into holes leading to interior walls. The law offices of Matuszak and Stillwagon, east of the Old Germán at 116 W. j Washington St., was flooded with water from the hoses and smoke damage was heavy in other business places in the block. ■ I - ■