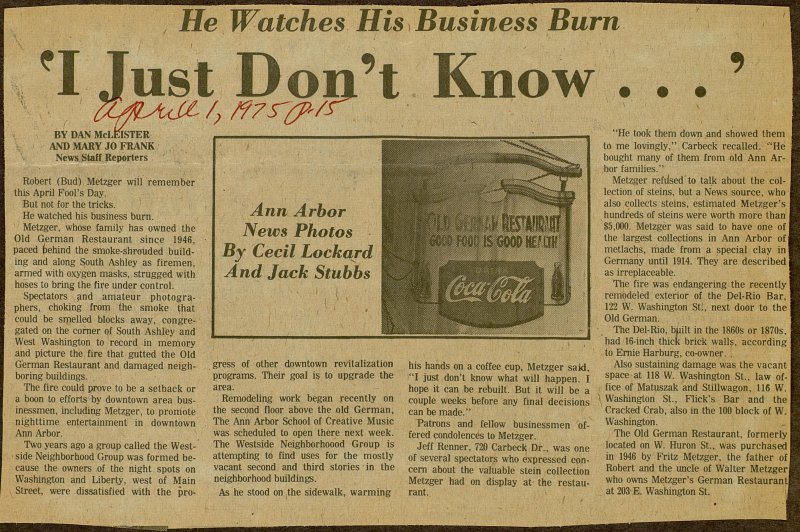 Robert (Bud) Metzger will remember this April Fool's Day. But not for the tricks. He watched his business burn. Metzger, whose family has owned the Oíd Germán Restaurant since 1946, paced pehind the smoke-shrouded building and along South Ashley as firemen, armed with oxygen masks, strugged with hoses to bring the fire under control. Spectators and amateur photographers, choking f rom the smoke (hat could be smelled blocks away, congregated on the corner of South Ashley and West Washington to record in memory and picture the fire that gutted the Old Germán Restaurant and damaged neighboring buildings. The fire could prove to be a setback or a boon to efforts by downtown area businessmen, including Metzger, to promote nighttime entertainment in downtown Ann Arbor. Two years ago a group called the Westside Neighborhood Group was formed because the owners of the night spots on Washington and Liberty, west of Main Street, were dissatisfied with the gress of other downtown revitalization programs. Their goal is to upgrade the area. Remodeling work began recently on the second floor above the oíd Germán, The Ann Arbor School of Creative Music was scheduled to open there next week. The Westside Neighborhoood Group is attempting to find uses for the mostly vacant second and third stories in the neighborhood buildings. As he stood on the sidewalk, warming his hands on a coffee cup, Metzger said, "I just don't know what will happen. I hope it can be rebuilt. But it will be a couple weeks before any final decisions can be made." Patrons and fellow businessmen offered condolences to Metzger. Jeff Renner, 7?0 CarbecH Dr., was one of several spectators who expressed concern about the valuable stein collection Metzger had on display at the restaurant. "He took them down and showed them I to me lovingly,". Carbeck recalled. "He I bought many of them from old Ann I bor families." Metzger refilsed to talk about the I lection of steins, but a News source, who I also collects steins, estimated Metzger's I hundreds of steins were worth more than I $5,000. Metzgèr was said to have one of I the largest collections in Ann Arbor ofl metlachs, made from a special clay inl Germañy until 1914. They are describedl as irreplaceable. The fire was endangering the recently I remodeled exterior of the Del-Rio Bar, 1 122 W. Washington Sti, next door to the I Old Germán. ■ , The Del-Rio, biailt in the 1860s or 1870s, I had 16-inch thick brick walls, according I to Ernie Harburg, co-owner. Also sustaining damage was the vacant I space at 118 W. Washington St., law 1 fice of Matuszak and Stillwagon, 116 W. I Washington St., Flick's Bar and the I Cracked Crab, also in the 100 block of W. I Washington. . I The Old Germán Restaurant, formerly I located on W. Huron St., was purchasedl in 1946 by Fritz Metzger, the father ofl Robert and the uncle of Wálter Metzgerl who owns Metzger's Germán Restaurantl at 203 E. Washington St. I I