Old German Could Be Reconstructed 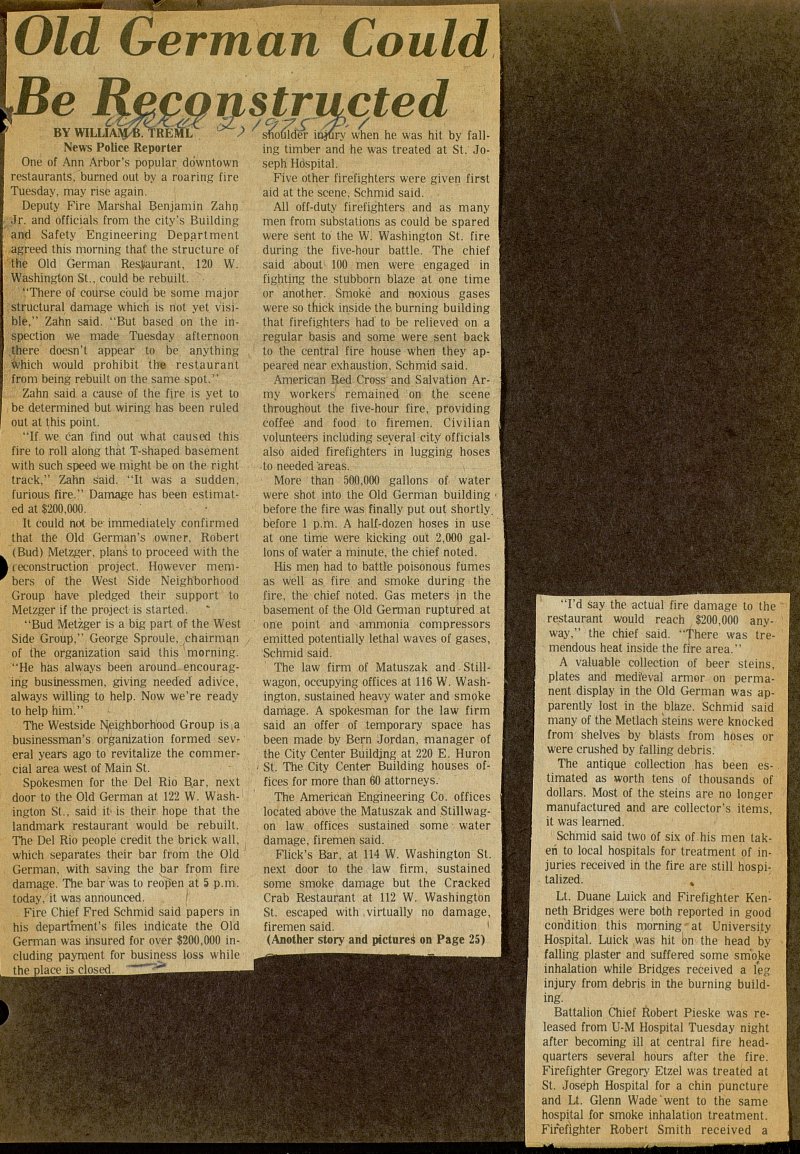 One of Ann Arbor's popular ddwntown restaurants, burned out by a roaring fire Tuesday, may rise again. Deputy Fire Marshal Benjamin Zahn Jr. and officials from the city's Building and Safety Engineering Department agreed this morning thaí the structure of the Oíd Germán Restaurant, 120 W. Washington St., could be rebuilt. "Thereof course cöuld be some major structural damage which is not yet visible," Zahn said. "But based on the inspection we made Tuesday afternoon there doesn't appear to be anything which would prohibit the restaurant from being rebuilt on the same spot." Zahn said a cause of the fjre is yet to be determined but wiring has been ruled out at this point. "If. we Can find out what caused this fire to roll along thát T-shaped basement with such speed we might be on the right track," Zahn said. "It was a sudden, furious fire." Damage has been estimated at $200,000. It could not be immediately confirmed that the Old German's owner, Robert (Bud) Metzger, plans to proceed with the 1 1 econstruction project. However members of the West Side Neiglïborhood Group have pledged their support to Metzger if the project is started. "Bud Metzger is a big part of the West Side Group," George Sproule, „chairman . of the organization said this morning. "He has always been around encouraging businessmen, giving needed adivce, always willing to help. Now we're ready tohelphim." The Westside eighborhood Group is;a businessman's organization formed several years ago to revitalize the commercial area west of Main St. Spokesmen for the Del Rio Bar, next door to the Old Germán at 122 W. Washington St., said it is their hope that the landmark restaurant would be rebuilt. The Del Rio people credit the brick wall, which separates their bar from the Old Germán, with saving the bar from fire damage. The bar 'was to reopen at 5 p.m. today, it was announced. Fire Chief Fred Schmid said papers in his department's files indícate the Old Germán was insured for over $200,000 including payment for business loss while the place is cosed_ZZLmm C?'7S snoulder iojtiry when he was hit by I ing timber and he was treated at St. I seph Hospital. Fjive other firefighters were given first I aid at the scène, Schmid said. All off-duty firefighters and as many I men from substations as could be spared I were sent to the W Washington St. fire I during the five-hour battle. The chief I said about1 100 men were engaged in I fighting the stubborn blaze at one time I or another. Smoké and noxious gases I were so thick inside the burning building I that firefighters had to be relieved on a I regular basis and some were sent back I to the central fire house when they appeared near exhaustion, Schmid said. American Red Cross and Salvation Army workers remained on the scène I throughout the five-hour fire, providing I coffee and food to firemen. Civilian J volunteers inclüding seyeral city officials I alsö aided firefighters in lugging hoses I -to needed areas. More than 500,000 gallons of water were shot into the Oíd Germán building ■ I before the fire was finally put out shortly. before 1 p.m. A half-dozen hoses in use at one time were kicking out 2,000 gallons of water a minute, the chief noted. His men had to battle poisonous fumes as well as fire and smoke during the fire, the chief noted. Gas meters in the basement of the Oíd Germán ruptured at one point and ammonia compressors emitted potentially lethal waves of gases, Schmid said. The law firm of Matuszak and Stillwagon, occupying offices at 116 W. Washington, sustained heavy water and smoke darriage. A spokesman for the law firm said an offer of témpora ry space has been made by Bern Jordán, manager of the City Center Building at 220 E. Huron ■ St, The City Center Building houses offices for more than 60 attorneys. The American Engineering Co. offices j located aböve the Matuszak and Stillwagon law offices sustained some water damage, firemen said. Flick's Bar, at 114 W. Washington St. next door to the law firm, sustained some smoke damage but the Cracked Crab Restaurant at 112 W. Washington St. escaped with virtually no damage, firemen said. ' (Another story and piclures on Page 25) ■■iim-wiwiiini i "I'd say the actual fire damage to the restaurant would reach $200,000 anyway," the chief said. "There was tremendous heat inside the fire area." A valuable collection of beer steins, I plates and medi'eval armor on permanent display in the Oíd Germán was apparently lost in the blaze. Schmid said many of the Metlach steins were knocked f rom shelves by blasts f rom hos es or were crushed by falling debris. The antique collection has been I [ timated as worth tens of thousands of dollars. Most of the steins are no longer manufactured and are collector's items, it was learned. Schmid said two of six of his men taken to local hospitals for treatment of injuries received in the fire are still hospitalized. Lt. Duane Luick and Firefighter Kenneth Bridges were both reported in good condition this morning'at University Hospital. Luick was hit bn the head by falling piaster and suffered some sm'oke inhalation while Bridges received a íe injury from debris in the burning building. Battalion Chief Robert Pieske was released from U-M Hospital Tuesday night after becoming ill at central fire headquarters several hours after the fire. Firefighter Gregory Etzel was treated at St. Joseph Hospital for a chin puncture and Lt. Glenn Wade went to the same hospital for smoke inhalation treatment. Firefighter Robert Smith received a I