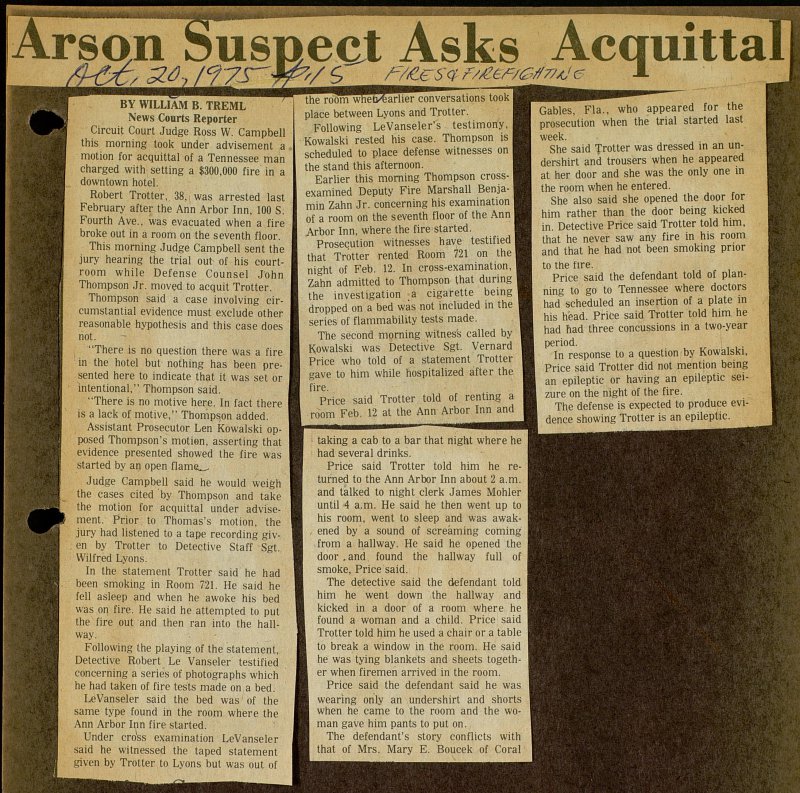 Circuit Court Judge Ross W. Campbell this morning took under advisement a motion for acquittal of a Tennessee man I I charged with setting a $300,000 fire in a I downtown hotel. Robert Trotter, 38, was arrested last I February after the Ann Arbor Inn, 100 S. I Fourth Ave., was evacuated when a fire I broke out in a room on the seventh floor. I This morning Judge Campbell sent the I jury hearing the trial out of his I room while Defense Counsel John I Thompson Jr. moved to acquit Trotter. Thompson said a case involving I cumstantial evidence must exclude other I reasonable hypothesis and this case does I not. "There is no question there was a fire I in the hotel but nothing has been I sented here to indícate that it was set or I intentional," Thompson said. I "There is no motive here. In fact there I is a lack of motive," Thompson added. I Assistant Prosecutor Len Kowalski I posed Thompson's motion, asserting that I evidence presented showed the fire was I started by an open flame Judge Campbell said he would weigh I the cases cited by Thompson and take I the motion for acquittal under adviseI ment. Prior to Thomas's motion, the I jury had listened to a tape recording ! , en by Trotter to Detective Staff Sgt, I Wilfred Lyons. I In the statement Trotter said he had been smoking in Room 721. He said he feil asleep and when he awoke his bed was on fire. He said he attempted to put the fire out and then ran into the hallway. Following the playing of the statement, Detective Robert Le Vanseier testified concerning a series of photographs which he had taken of fire tests made on a bed. I Le Vanseier said the bed was ' of the same type found in the room where the Ann Arbor Inn fire started. I Under cross examination LeVanseler I said he witnessed the taped statement given by Trotter to Lyons but was out of j theroomwhétaríier conversations took I place between Lyons and Trotter. Following LeVanseler's testimony, I Kowalski rested his case. Thompson is I scheduled to place defense witnesses on ■ the stand this afternoon. Earlier this morning Thompson ■ examined Deputy Fire Marshall 1 min Zahn Jr. concerning his examination ■ of a room on the seventh floor of the Ann ■ Arbor Inn, where the fire started. Prosecution witnesses have testified ■ that Trotter rented Room 721 on theH night of Feb. 12. In cross-examination, ■ Zahn admitted to Thompson that during ■ the investigation a cigarette being ■ dropped on a bed wás not included in the ■ I series of flammability tests made. I The second morning witness called by I I Kowalski was Detective Sgt. Vernard I I Price who told of a statement Trotter I I gave to him while hospitalized áfter the I fire. Price said Trotter told of renting a I room Feb. 12 at the Ann Arbor Inn and I in - -mmMH taking a cab to a bar that night where he had several drinks. Price said Trotter told him he returned to the Ann Arbor Inn about 2 a.m. and talked to night clerk James Mohler until 4 a.m. He said he then went up to his room, went to sleep and was awakI , ened by a sound of screáming coming from a hallway. He said he opened the door .and found the hallway full of smoke, Price said. The detective said the defendant told him he went down the hallway and I kicked in a door of a room where he I found a woman and a child. Price said I Trotter told him he used a chair or a table ■ to break a window in the room. He said he was tying blankets and sheets togethI er when firemen arrived in the room. Price said the defendant said he was I wearing only an undershirt and shorts ■ when he carne to the room and the wo I man gave him pants to put on. The defendant's story conflicts with I that of Mrs. Mary E. Boucek of Coral I Gables, Fia., who appeared for the I prosecution when the trial started last I week. She said Trotter was dressed in an unI dershirt and trousers when he appeared I at her door and she was the only one in the room when he entered. She also said she opened the door for him rather than the door being kicked in. Detective Price said Trotter told him, that he never saw any fire in his room and that he had not been smoking prior to the fire. Price said the defendant told of planning to go to Tennessee where doctors I had scheduled an insertion of a píate in his hèad. Price said Trotter told him he had had three concussions in a two-year I period. I In response to a question by Kowalski, Price said Trotter did not mention being I an epileptic or having an epileptic ■ I zure on the night of the fire. The defense is expected to produce ■ I dence showing Trotter is an epileptic.