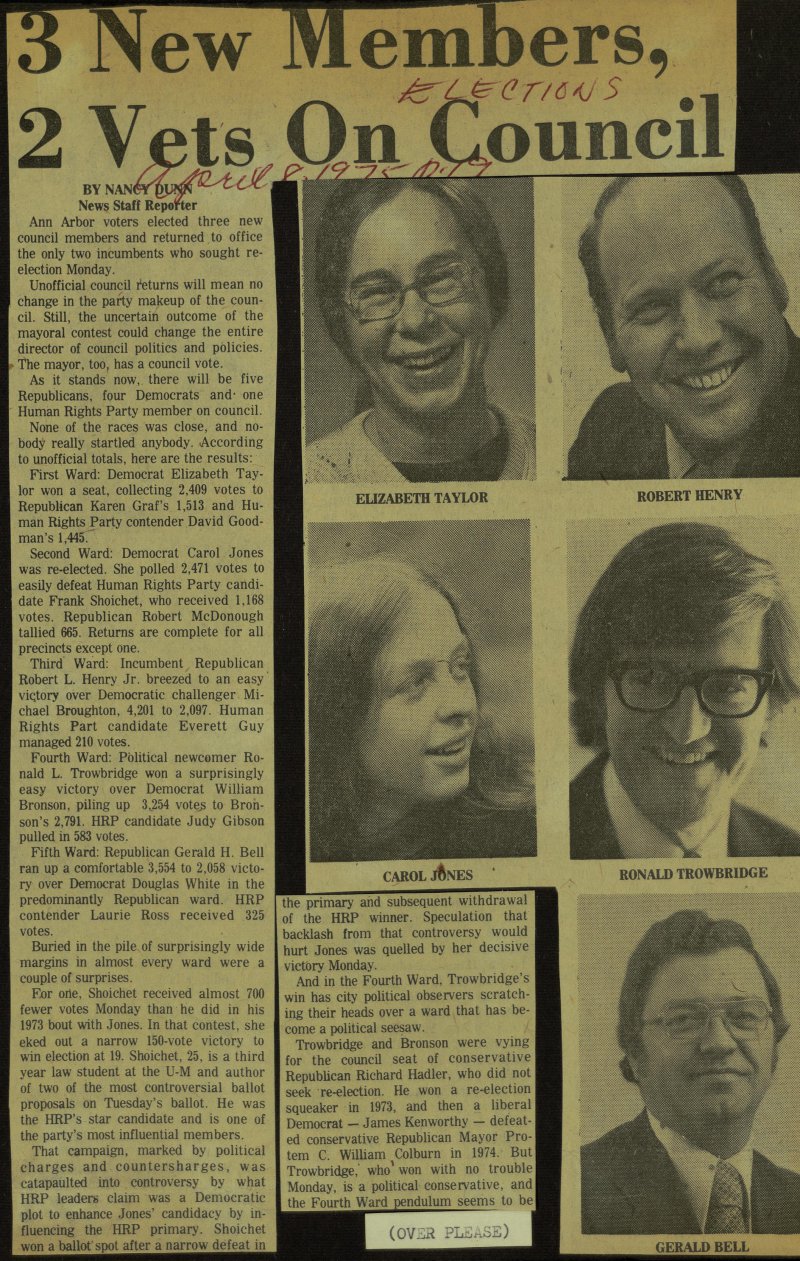 Ann Arbor voters elected three new council members and returned to office the only two incumbents who sought reelection Monday. Unofficial council returns will mean no change in the party makeup of the council. Still, the uncertain outcome of the mayoral contest could change the entire director of council politics and pólicies. ■ The mayor, too, has a council vote. As it stands now, there will be five Republicans, four Democrats one Human Rights Party member on council. None of the races was close, and nobody really startled anybody. According to unofficial totals, here are the results: First Ward: Democrat Elizabeth Taylor won a seat, collecting 2,409 votes to Republican Karen Graf 's 1,513 and Human Rights Party contender David Goodman's 1,445. Second Ward: Democrat Carol Jones was re-elected. She polled 2,471 votes to easily defeat Human Rights Party candidate Frank Shoichet, who received 1,168 I votes. Republican Robert McDonough tallied 665. Returns are complete for all precincts except one. Third Ward: Incumbent, Republican Robert L. Henry Jr. breezed to an easy' viqtory over Democratie challenger Michael Broughton, 4,201 to 2,097. Human Rights Part candidate Everett Guy managed 210 votes. Fourth Ward: Pblitical newcomer Ronald L. Trowbridge won a surprisingly easy victory over Democrat William Bronson, piling up 3,254 votéis to Brohson's 2,791. HRP candidate Judy Gibson pulled in 583 votes. Fifth Ward: Republican Gerald H. Bell ran up a comfortable 3,554 to 2,058 victory over Democrat Douglas White in the predominantly Republican ward. HRP contender Laurie Ross received 325 votes. Buried in the pile of surprisingly wide margins in almost every ward were a couple of surprises. For orie, Shoichet received almost 700 fewer votes Monday than he did in his 1973 bout with Jones. In that contest, she eked out a narrow 150-vote victory to win election at 19. Shoichet, 25, is a third year law student at the U-M and author of two of the most controversial ballot proposals on Tuesday's ballot. He was the HRP's star candidate and is one of the party's most influential members. That campaign, marked by political charges and countersharges, was catapaulted into controversy by what I HRP leaders claim was a Democratie plot to enhance Jones' candidacy by influencing the HRP primary. Shoichet won a ballot spot after a narrow defeat in the primary and subsequent withdrawal of the HRP winner. Speculation that backlash from that controversy would hurt Jones was quelled by her decisive l victbry Monday. And in the Fourth Ward, Trowbridge's win has city political observers scratching their heads over a ward that has become a political seesaw. Trowbridge and Bronson were vying for the council seat of conservative Republican Richard Hadier, who did not seek re-election. He won a re-election squeaker in 1973, and then a liberal Democrat - James Kenworthy - defeated conservative Republican Mayor Protem C. William Colburn in 1974. But Trowbridge,' who' won with no trouble Monday, is a political eonservative, and the Fourth Ward pendulum seems to bel (OViR PLEASE) 3 NEW MEMBERS, 2 V."jT ON COÜNCIL . . . off ir another sweep. Significant in the Fourth Ward contest, however, is the f act that HRP candidate Gibson garnered 560 votes - just about equal to Trowbridge's win margin. Taylor's First Ward victory was no surprise. The 31-year-old Taylor served a two-year term on the County Board of Commissioners .and challenged Demo crat State Rep. Perry Bullard for the 53rd House Democratie nomination last August. Well known in the area, she easily assumed the seat vacated by liberal Democrat Norris Thomas, who did not seek re-election. Henry's sweeping victory in the Third Ward was no surprise either. A Republican who campaigned heavily on fiscal-responsibility to win his seat in 1973, he had no trouble in his bid to retain his seat in the generally Republican ward. I Bell in his first try'for public office, also won'handüy in the Fifth Ward. Bell 35, is a pharmacist and medical sales representative. Trowbridge, 37, the other council newcomer, is associate professor of English at Eastern Michigan