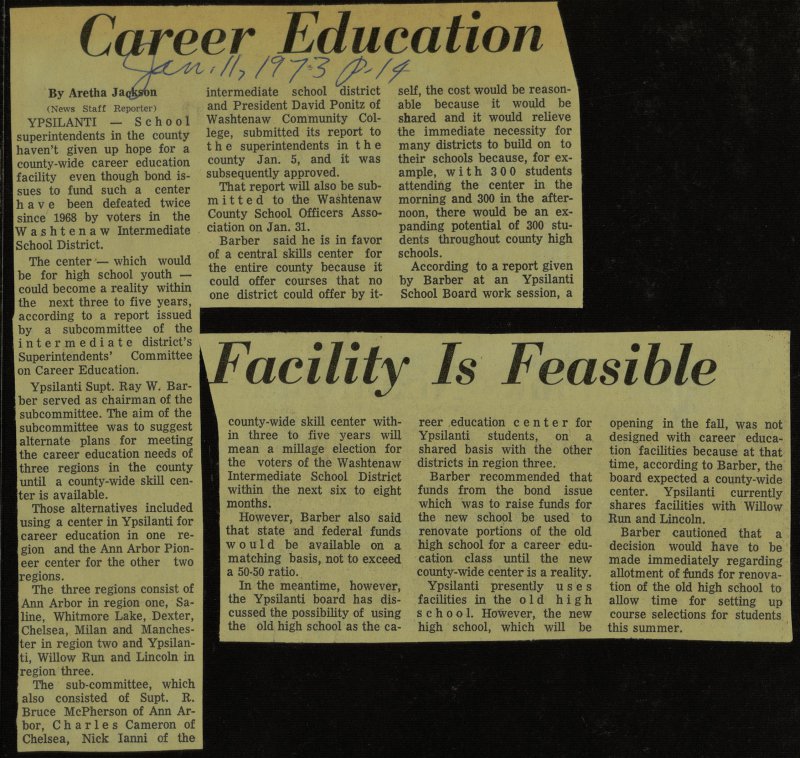 YPSILANTI - School I superintendents in the county I haven't given up hope for a I county-wide career education I f acility even though bond isI sues to fund such a center I h a v e been defeated twice I since 1968 by voters in the Iw ashtenaw Intermedíate School District. The center - which would Ibe for high school youth - I could become a reality within I the next three to five years, I according to a report issued I I by a subcommittee of the I lintermediate district's I Superintendents' Committee I on Career Education. I Ypsilanti Supt. Ray W. BarIber served as chairman of the I subcommittee. The aim of the ■ subcommittee was to suggest ■ altérnate plans for meeting Bthe career education needs of I three regions in the county Buntil a county-wide skill center is available. ■ Those alternatives included ■ using a center in Ypsilanti for ■ career education in one re■ gion and the Ann Arbor PionBeer center for the other two ■regions. The three regions consist of ■ Ann Arbor in región one, Sa■ line, Whitmore Lake, Dexter, ■ Chelsea, Milan and ManchesBter in región two and Ypsilan■ti, Willow Run and Lincoln in Bregion three. The sub-committee, which ■ also consisted of Supt. R. ■ Bruce McPherson of Ann Ar■ bor, Charles Cameron of I Chelsea, Nick Ianni of the intermedíate school district and President David Ponitz of Washtenaw Community College, submitted its report to the superintendents in t h e county Jan. 5, and it was subsequently approved. That report will also be subm i 1 1 e d to tiie Washtenaw County School Officers Association on Jan. 31. Barber said he is in favor of a central skills center for the entire county because it could offer courses that no one district could offer by self, the cost would be 1 able because it would be I shared and it would relieve I the immediate necessity for I many districts to build on to I their schools because, for example, with 30 0 students attending the center in the morning and 300 in the afternoon, there would be an expanding potential of 300 students throughout county high schools. According to a report given by Barber at an Ypsilanti School Board work session, a I county-wide skill center withI in three to five years will I mean a millage election for I the voters of the Washtenaw I Intermedíate School District I within the next six to eight I months. However, Barber also said I that state and federal funds Iwould be available on a I matching basis, not to exceed I a 50-50 ratio. In the meantime, however, I the Ypsilanti board has disI cussed the possibility of using I the old high school as the reer education center for Ypsilanti students, on a shared basis with the other districts in región three. Barber recommended that funds from the bond issue which was to raise funds for the new school be used to renovate portions of the old high school for a career education class until the new county-wide center is a reality. Ypsilanti presently uses facilities in the old high school. However, the new high school, which will be opening in the fall, was not designed with career education facilities because at that time, according to Barber, the board expected a county-wide center. Ypsilanti currently shares facilities with Willow Run and Lincoln. Barber cautioned that a decisión would have to be made immediately regarding allotment of funds for renovation of the old high school to allow time for setting up course selectíons for students this summer.