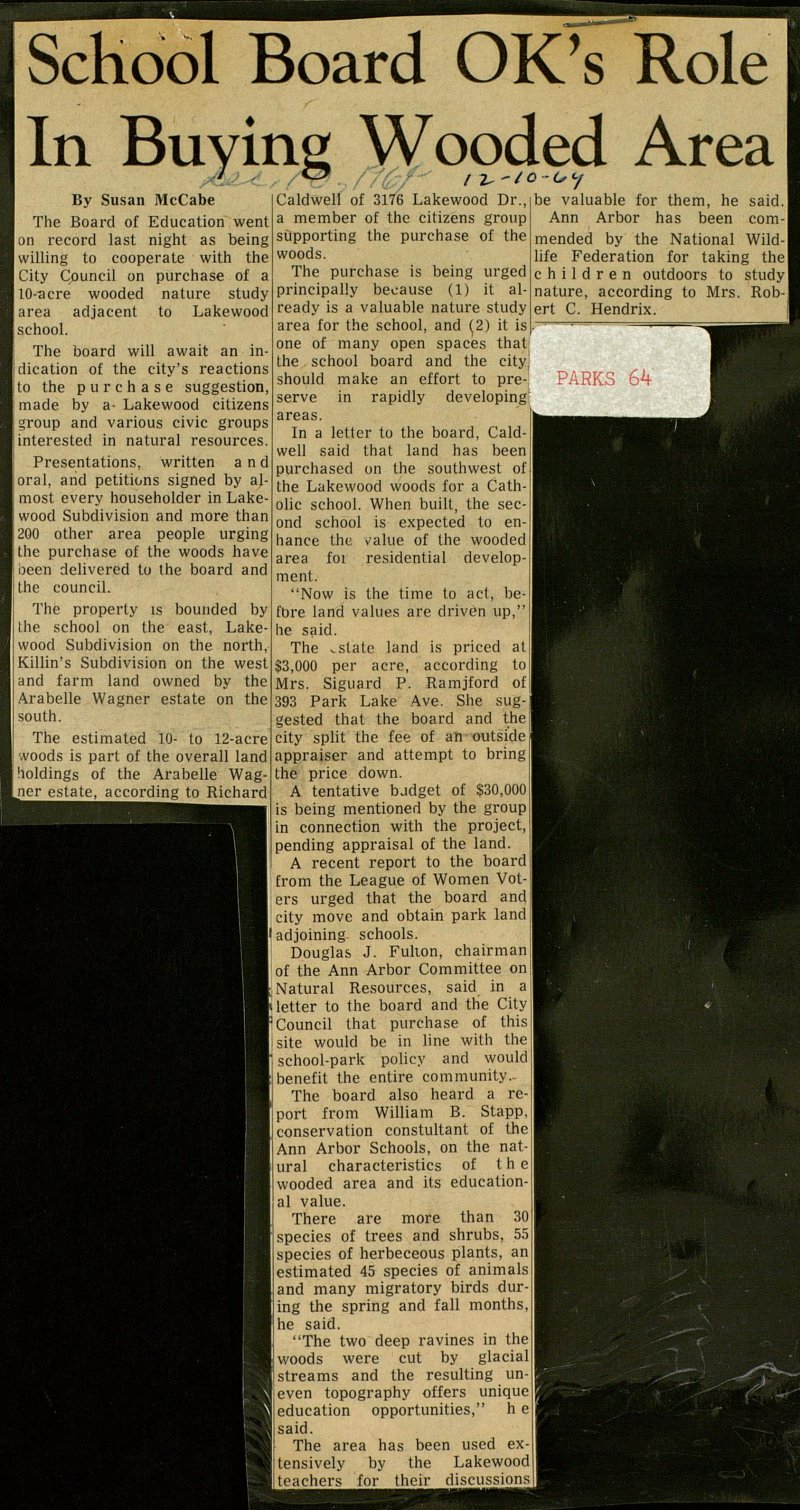 The Board of Education went Ion record last night as being I willing to cooperate with the City Council on purchase of a 10-acre wooded nature study area adjacent to Lakewood school. The board will await an indication of the city's reactions to the purchase suggestion, made by Lakewood citizens group and various civic groups interested in natural resources. Presentations, written and oral, and petitions signed by almost every householder in Lakewood Subdivisión and more than 200 other area people urging the purchase of the woods have been delivered to the board and the council. The property is bounded by i the school on the east, LakeI wood Subdivisión on the north, JKülin's Subdivisión on the west and farm land owned by the Arabelle Wagner estáte on the Uouth. The estimated to 12-acre I woods is part of the overall land holdings of the Arabelle Wag[ner estáte, according to Ric hard Caldwell of 3176 Lakewood Dr.,i a member of the citizens group supporting the purchase of the woods. The purchase is being urged principally because (1) it already is a valuable nature study area for the school, and (2) it is . one of many open spaces that the school board and the city, should make an effort to preserve in rapidly developing áreas. i In a letter to the board, Caldwell said that land has been purchased on the southwest of the Lakewood woods for a Catholic school. When built, the second school is expected to enhance thu alue of the wooded area foi residential development. "Now is the time to act, 1 fbre land values are driven up," he said. The estáte land is priced at I $3,000 per acre, according tol Mrs. Siguard P. Ramjford of I 393 Park Lake Ave. She sug-j gested that the board and the i city split the fee of an outsidej appraiser and attempt to bring II the price down. A tentative bjdget of $30,000 is being mentioned by the group in connection with the project, pending appraisal of the land. A recent report to the board I from the League of Women Vot- ers urged that the board andj city move and obtain park land I I adjoining schools. Douglas J. Fulion, chairman of the Ann Arbor Committee on Natural Resources, said in a letter to the board and the City PCouncil that purchase of this site would be in line with the school-park policy and would benefit the entire community.The board also heard a re- port from William B. Stapp, conservation constultant of the Ann Arbor Schools, on the natural characteristics of the wooded area and its educalional value. There are more than 30 species of trees and shrubs, 55 species of herbeceous plants, an estimated 45 species of animáis and many migratory birds durfling the spring and f all months, he said. "The two deep ravines in the I woods were cut by glacial! Istreams and the resulting unIjeven topography offers unique I education opportunities," h e said. The area has been used extensively by the Lakewood Ikeachersforthekdiscussions be valuable for them, he said. Ann Arbor has been com-l mended by the National Wildlife Federation for taking the children outdoors to study nature, according to Mrs. Robert C. Hendrix. I PARKS 64