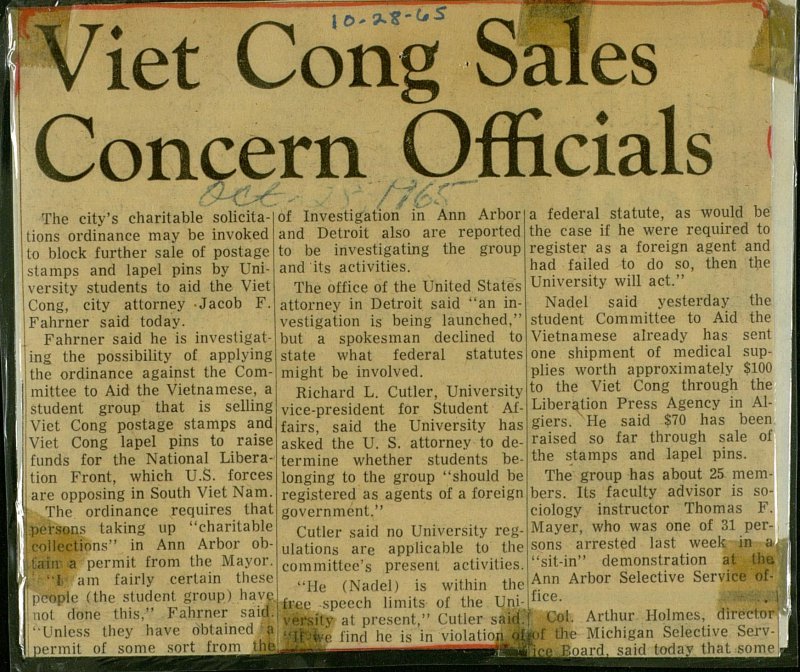 The city's charitable solicitations ordinance may be invoked to block further sale of postage stamps and lapel pins by University students to aid the Viet Cong, city attorney -Jacob F. Fahrner said today. Fahrner said he is investigating the possibility of applying the ordinance against the Committee to Aid the Vietnamese, a student group that is selling i Viet Cong postage stamps and Viet Cong lapel pins to raise funds for the National Liberation Front, which U.S. forces are opposing in South Viet Nam. .The ordinance requires that persons taking up "charitable jcoliections" in Ann Arbor ob: a permit from the Mayor. iNWjpain fairly cerlain these people (the student group) have nol done this," Fahrner said. '"'Unless Ihey have obtaincd ;a ; permit of some__sort_from_t of Investigaüon in Ann Arbor and Detroit also are reported to be investigating the group and its activities. The office of the United States attorney in Detroit said "an investigalion is being launched," but a spokesman declined to state what federal statutes might be involved. Richard L. Cutler, University vice-president for Student Affairs, said the University has asked the U. S. attorney to determine whether students belonging to the group "should be registered as agents of a foreign government." Cutler said no University regulations are applicable to the committee's present activities. "He (Nadel) is within the speech limits of the Universily al present," Cutler saM? LKe fincl he is iniolatioiM a federal statute, as would be the case if he were required to register as a foreign agent and had failed to do so, then the University will act." Nadel said yesterday the student Committee to Aid the Vietnamese already has sent one shipment of medical supplies worth approximately $100 to the Viet Cong through the Liberation Press Agency in Algiers. He said $70 has been raised so far through sale of the stamps and lapel pins. The group has about 25 merabers. Its faculty advisor is sociology instructor Thomas F. I Mayer, who was one of 31 persons arrested last week in a "sit-in" demonstration at Ann Arbor Selective Service office. . I Col. Arthur Holmes, director , fol I he Michigan Selective ServBoard. said today that some J