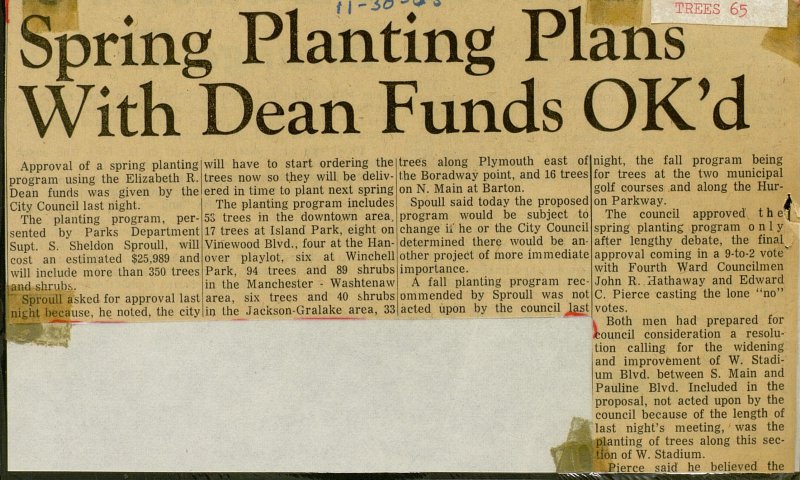 Approval of a spring planting program using the Elizabeth R. Dean funrls was given by the City Council last night. The planting program, perisented by Parks Department Supl. S. Sheldon Sproull, wíl] cost an estimated $25,989 and will include more than 350 trees land shrubi,. r Sproull asked for approval last nicht because, he noted, the city vvill have to start ordering the trees now so they will be delivered in time to plant next spring The planting program includes 53 trees in the downtown area, 17 trees at Island Park, eight on Vinewood Blvd., four at the Hanover playlot, six at Winchell Park, 94 trees and 89 shrubs in the Manchester - Washtenaw area, six trees and 40 shrubs in the Jackson-Gralake area, 33 trees along Plymouth east of the Boradway point, and 16 trees on N. Main at Barton. Spoull said today the proposed program would be subject to change ií' he or the City Council determined Ihere would be another project of more immediate importance. A fall planting program reeommended by Sproull was not acted upon by the council last night, the fall program being for trees at the two municipal golf courses and along the Huron Parkway. i The council approved the spring planting program o n 1 y after lengthy debate, the final approval coming in a 9-to-2 votes with Fourth Ward Councilmen John R. Hathaway and Edward C. Pierce casting the lone "no" votes. i Both men had prepared for eouncil consideration a resolution calling for the widening and improvement of W. Stadium Blvd. between S. Main and Pauline Blvd. Included in the proposal, not acted upon by the council because of the length of last night's meeting, was the planting of trees along this section of W. Stadium. -Pierce said he believed the &n funds should be used for special projects and asked that me council not vote on Sproull's request before voting on h i s and Hathaway's proposal. Third Ward Councilman Robiert P. Weeks said with the exkstence of the Dean i'und (which Iresults in income of about $75,'000 to $80,000 annually) the city may be tempted to use the funds for purposes which would normally be covered by the city budget. Asked if he would request the same projects without the Dean funds being available, Sproull indicated he probably woulS but added that the trees purchased would be much smaller in size and thereby less costUT He said the larger trees "give a more immediate effect" and have better chances for survival. Last night's discussion may lead to a general debate by the council on how the Dean funds should be used. "I f e e 1 we should debate the function of the fund and until we do we should not appropriatc iunds for littlé Drpjects here and there," Piercê Isaid.