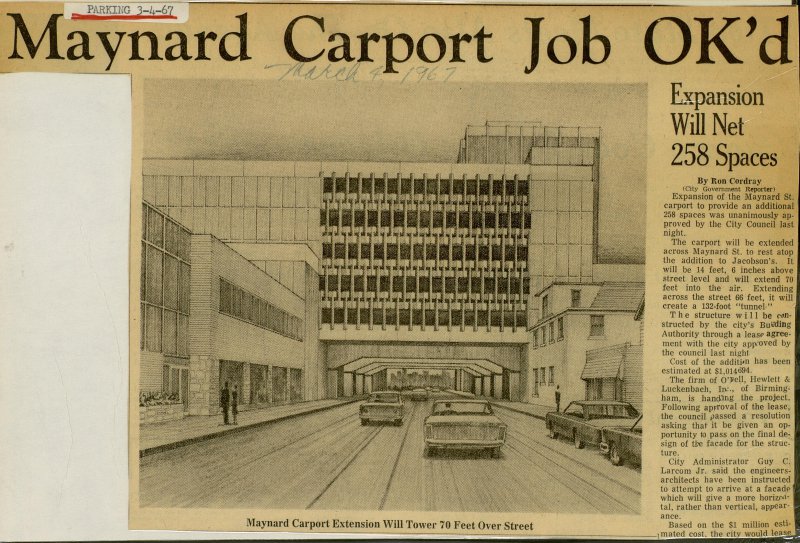 Expansión of the Maynard St. carport to provide an additional 258 spaces was unanimously approved by the City Council last night. The carport will be extended across Maynard St. to rest atop the addition to Jacobson's. It will be 14 feet, 6 inches above street level and will extend 70 feet into the air. Extending across the street 66 feet, it will créate a 132-foot "tunnel" The structure will be rnstructed by the city's Buding Authority through a lease agreement with the city app'oved by the council last night Cost of the additin has been estimated at $1,014694. The firm of O'Pell, Hewlett & Luckenbach, Iiv., of Birmingham, is hand-lng the project. Following aprroval of the lease, the council passed a resolution asking that il be given an opportunity to pass on the final design of tl?e facade for the structure. City Administrator Guy C. Larcom Jr. said the engineersarchitects have been instructed I to attempt to arrive at a facade j which will give a more horizrilal. rather than vertical, appearance. Based on the $1 million estimated cost, the city would lease the structure from the Buildir Authority for $59,300 ariiiuallv for 30 years. Expenses would total about $5,500 annuaJly. Larcom said that based'on an income of $250 per space, the annual net loss would be ' If the spaces returned $325 yearly, the city would realiz; a prot it of $16,450. The city noted that developers of the 26-story apartment building at Villiam and Maynard have agreed to pay $2,500 annually towaid the . cost of the structure, and vould assume any deficit up to $l!,000. I Cost of the basic structure is estimated at $636,943, while elevators will cost $65,100 ano an express ramp will add anoiher $40,872. A pre-cast concrete screening wall will cost $112,253, deck coating to prevent leakage will cost $79,123 and painting of the interior will cost $23,469. Architects' fees will run about $53,634, while incidentals will add another $3,300. Cost per space- based on 258 additional spaces- will be about $4,270, while if this is figured on the basis of 300 spaces it would be $3,666 per space. (To ' nstall the express ramp, 42 1 spaces will have to be removed ) from the existing structure.) Project designer George fis told the council the f ure will be roomier than others n the city and will have increased lighting. "We are trying to coordinate a functional screen with an aesthetic one," Harris added, referring to the ■ facade which will cover all four sides of the structure.