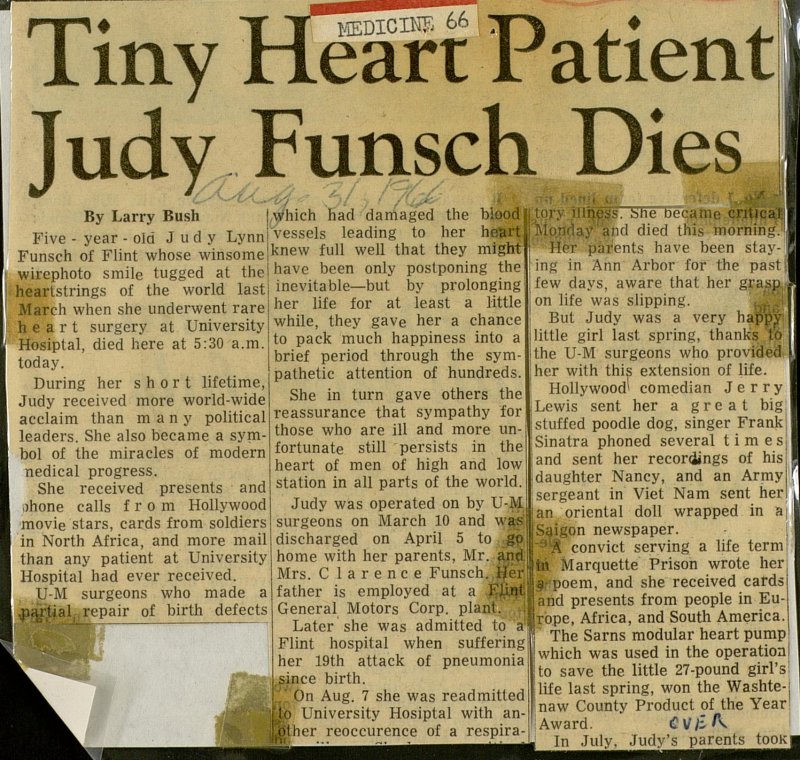 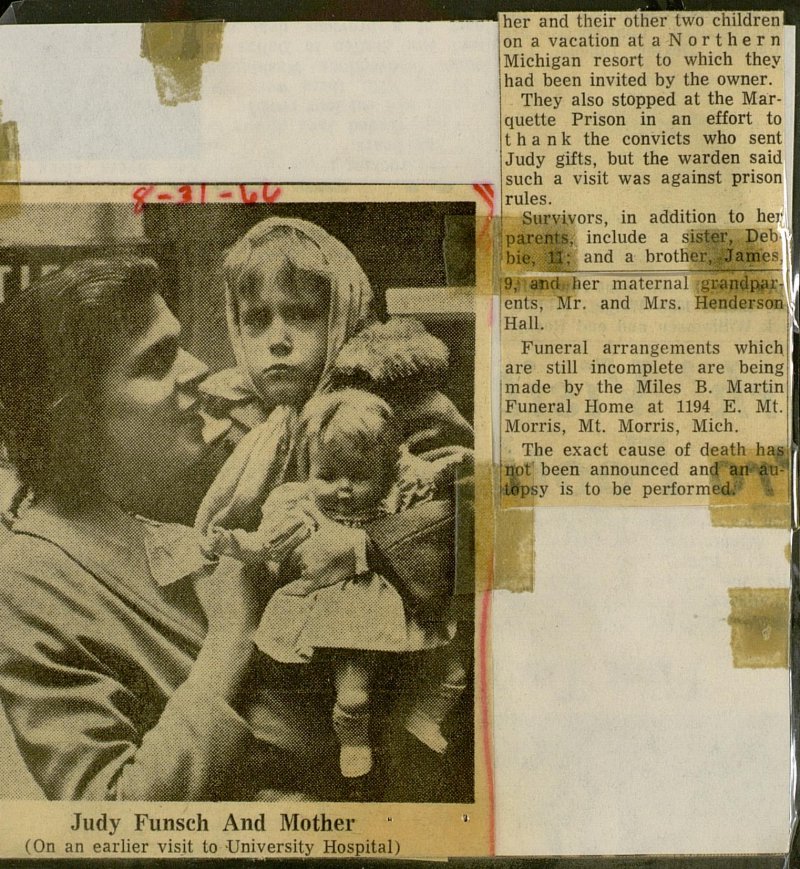 Five-year-old Judy Lynn Funsch of Flint whose winsome wire photo smile tugged at the heartstrings of the world last Alarch when she underwent rare h e a r t surgery at University Hosiptal, died here at 5:30 a.m. today. During her short lifetime, Judy received more world-wide acclaim than m a n y political leaders. She also became a symbol of the miracles of modern nedical progress. She received presents and hone calis f r o m Hollywood j movie stars, cards from soldiers in North África, and more mail than any patiënt at University Hospital had ever received. IM surgeons who made a partial repair of birth defects yhich had damaged the blood 'vessels leading to her heart knew full well that they might have been only postponing the inevitable- but by prolonging her life for at least a little while, they gave her a chance to pack much happiness into a brief period through the sympathelic attention of hundreds. She in turn gave others the reassurance that sympathy for those who are ill and more unfortunate still persists in the heart of men of high and low station in all parts of the world. Judy was operated on by U-M surgeons on March 10 and wgs' discharged on April 5 to jj home with her parents, Mr. and Mrs. Clarence Funsch. ijfèr. father is employed at a General Motors Corp. plant. Later she was admitted to 'a' Flint hospital when suffering her 19th attack of pneumonia Isince birth. On Aug. 7 she was readmitted fto University Hosiptal with anL&lher reoccurence of a tory illhcss. .Mie bccanie cnUca'l'i] ÏUonrlay and died this morning. I Her párents have been staying in Ann Arbor for the pastfl few days, aware that her gfasgJ on life was slipping. Bul Judy was a very happy ittle girl last spring, thanks to the U-M surgeons who provided her with this extensión of life. Hollywood comedian J e r r y Lewis sent her a great big; stuff ed poodle dog, singer Frank j Sinatra phoned several timesj and sent her recordjngs of his daughter Nancy, and an Army sergeant in Viet Nam sent her an oriental dolí wrapped in aj on newspaper. "9& convict serving a life term: in M arque tte Prison wrote her r'poem, and she received cards and presents from people in Europe, África, and South America. The Sarns modular heart pump which was used in the operationj to save the little 27-pound girl's life last spring, won the Washte-j !naw County Product of the Year Award. ÉVíV In July, Judy's parents took her and their other two children on a vacation at a Northern Michigan resort to which they had been invited by the owner. They also stopped at the Marquette Prison in an effort to thank the convicts who sent Judy gifts, but the warden said sueh a visit was against prison rules. Surviyors, in addition to hei' s, include a sister, Deb ;: and a brother James. ; maternal r-andpai'ents, Mr. and Mrs. Henderson. Hall. Funeral arrangements which are still incomplete are being) ;made by the Miles B. Martin Funeral Home at 1194 E. Mt. Morris, Mt. Morris, Mich. The exact cause of death has not been announced and an autopsy is to be performed