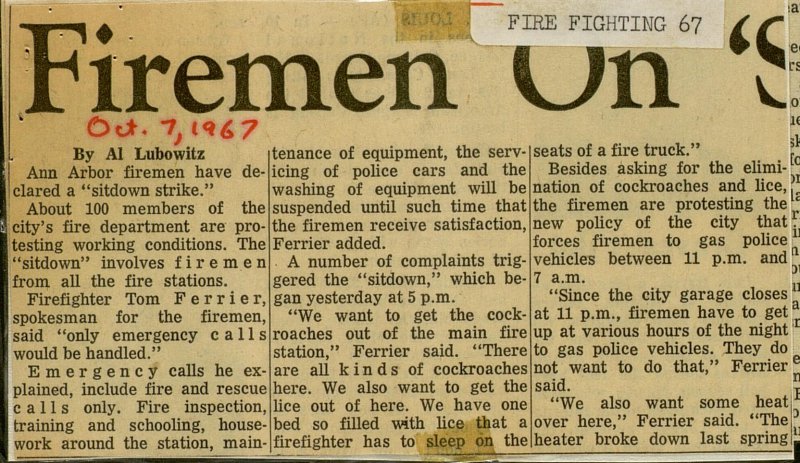 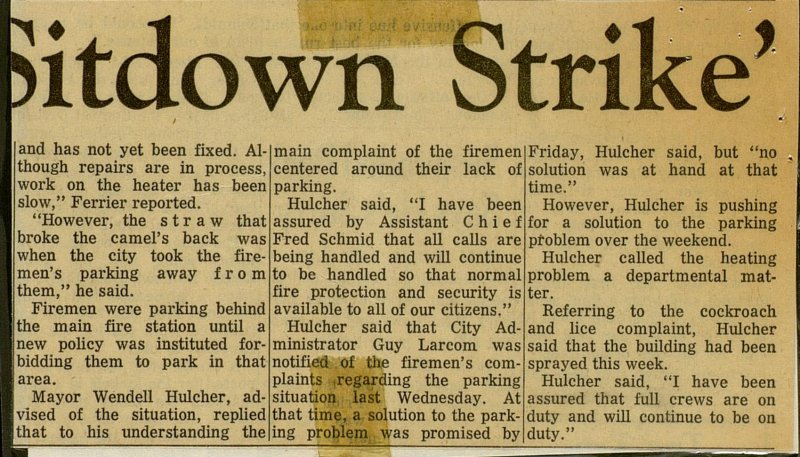 Aan Arbor firemen have declared a "sitdown strike." About 100 members of the city's fire department are protesting working conditions. The "sitdown" involves firemen from all the fire stations. Firefighter Tom Ferrier, spokesman for the firemen, said "only emergency calls would be handled." Emergency calis he explained, include fire and rescue calis only. Fire inspection, training and schooling, housework around the station, tenance of equipment, the servicing of pólice cars and the washing of equipment will be suspended until such time that the firemen receive satisfaction, Ferrier added. A number of complaints triggered the "sitdown," which began yesterday at 5 p.m. "We want to get the cockroaches out of the main fire station," Ferrier said. "There are all kinds of cockroaches here. We also want to get the lice out of here. We have one bed so filled with lice that a firefighter has to sleep ón the seats of a fire truck." Besides asking for the elimination of cockroaches and lice, the firemen are protesting the new policy of the city that forces firemen to gas pólice vehicles between 11 p.m. and 7 a.m. "Since the city garage closes at 11 p.m., firemen have to get up at various hours of the night to gas pólice vehicles. They do not want to do that," Ferrier said. "We also want some heat over here," Ferrier said. "The heater broke down last spring and has not yet been fixed. Although repairs are in process, work on the heater has been slow," Ferrier reported. "However, the straw that broke the camel's back was when the city took the firemen's parking away from them," he said. Firemen were parking behind the main fire station until a new policy was instituted forbidding them to park in that area. Mayor Wendell Hulcher, advised of the situation, replied that to his understanding the main complaint of the firemen centered around their lack of parking. Hulcher said, "I have been assured by Assistant Chief Fred Schmid that all calis are being handled and will continue to be handled so that normal fire protection and security is available to all of our citizens." Hulcher said that City Administrator Guy Larcom was notified of the firemen's complaints .regarding the parking situation. last Wednesday. At that time, a solution to the parking problem was promised by Friday, Hulcher said, but "no . solution was at hand at that time." However, Hulcher is pushing for a solution to the parking problem over the weekend. Hulcher called the heating problem a departmental matter. Referring to the cockroach and lice complaint, Hulcher said that the building had been sprayed this week. Hulcher said, "I have been assured that full crews are on duty and will continue to be on duty."