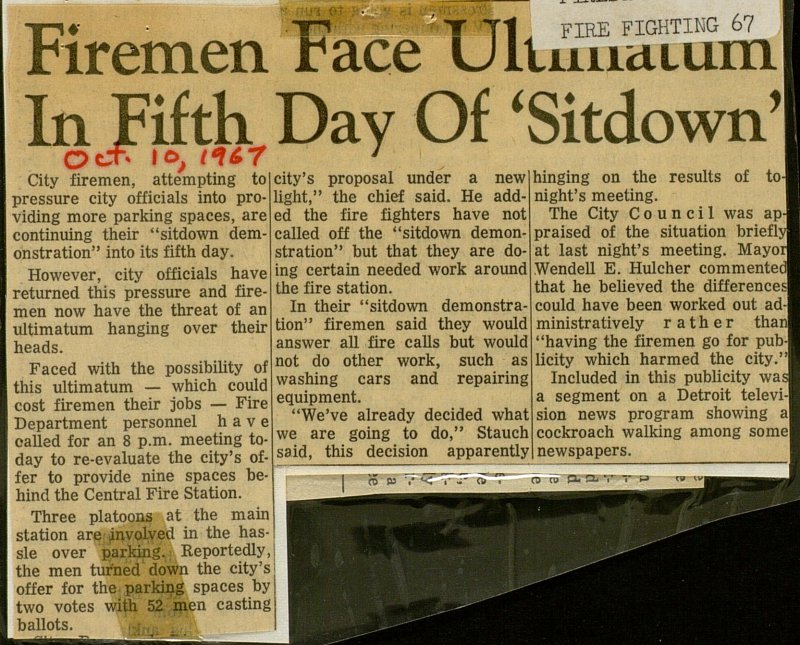 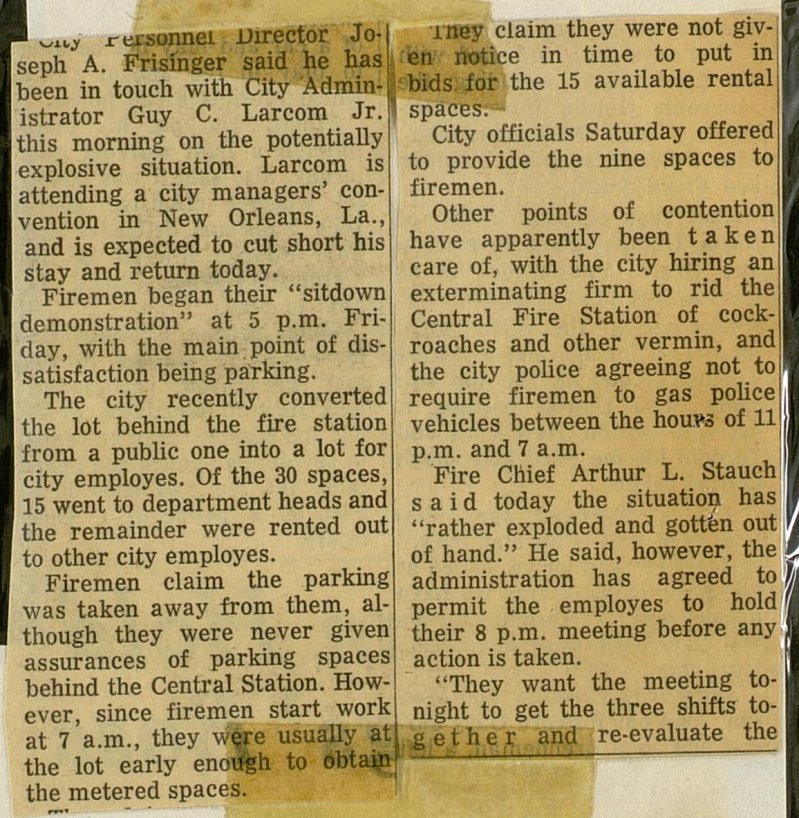 City firemen, attempting to pressure city officials into providing more parking spaces, are continuing their "sitdown demonstration" into its fifth day. However, city officials have returned this pressure and firemen now have the threat of an ultimatum hanging over their heads. Faced with the possibility of this ultimatum - which could cost firemen their jobs - Fire Department personnel have oalled for an 8 p.m. meeting today to re-evaluate the city's offer to provide nine spaces behind the Central Fire Station. Three platoons at the main station are involved in the hassle over parking. Reportedly, the men turned' down the city's offer for the parking spaces by two votes with 52 men casting ballots. Ciby rersunnei Director Joseph A. Frisínger said he has been in touch with City 'Administrator Guy C. Larcom Jr. this morning on the potentially explosive situation. Larcom is attending a city managers' convention in New Orleans, La., and is expected to cut short his stay and return today. Firemen began their "sitdown demonstration" at 5 p.m. Friday, with the main point of dissatisfaction being parking. The city recently converted the lot behind the fire station from a public one into a lot for city employés. Of the 30 spaces, 15 went to department heads and the remainder were rented out to other city employés. Firemen claim the parking was taken away from them, although they were never given assurances of parking spaces behind the Central Station. However, since firemen start work at 7 a.m., they wére usually at the lot early enough to obtain the metered spaces. xney claim they were not giv-i en notice in time to put in bids for the 15 available rental spaces. City officials Saturday offered to provide the nine spaces to firemen. Other points of contention have apparently been taken care of, with the city hiring an exterminating firm to rid the Central Fire Station of cockroaches and other vermin, and the city pólice agreeing not to I require firemen to gas pólice vehicles between the houw, of 11 p.m. and 7 a.m. Fire Chief Arthur L. Stauch s a i d today the situation has "rather exploded and gottèn out of hand." He said, however, the administration has agreed to permit the employés to hold their 8 p.m. meeting before any action is taken. "They want the meeting tonight to get the three shifts tog ether and re-evaluate the city's proposal under a new light," the chief said. He added the fire fíghters have not called off the "sitdown demonstration" but that they are doing certain needed work around the fire station. In their "sitdown demonstration" firemen said they would answer all fire calis but would not do other work, such as washing cars and repairing equipment. "We've already decided what we are going to do," Stauch said, this decisión apparently iiinging on the results of to-l night's meeting. The City C o u n c i 1 was ap-j praised of the situation brieflyl at last night's meeting. Mayorj Wendell E. Hulcher commentedl that he believed the differences could have been worked out administratively r a t h e r than "having the firemen go for publicity which harmed the city." Included in this publicity wad a segment on a Detroit televisión news program showing a cockroach walking among somel newspapers.