'U' Carillonneur To Play Before, After Yule Sing 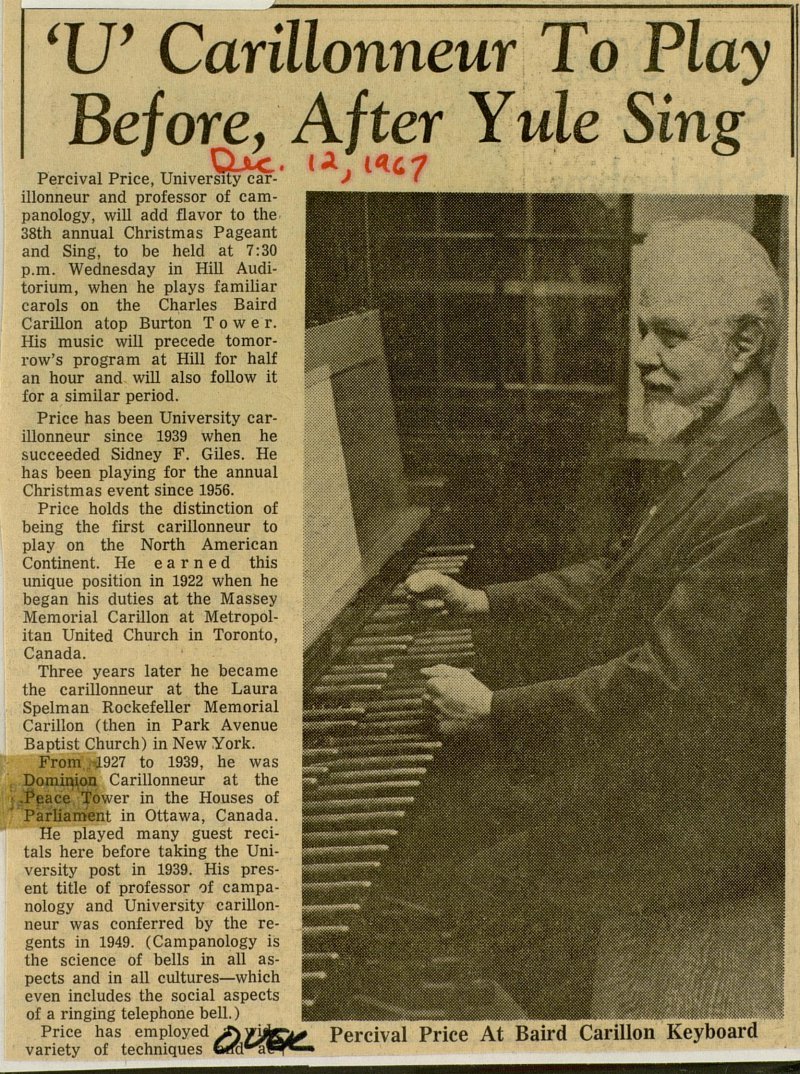 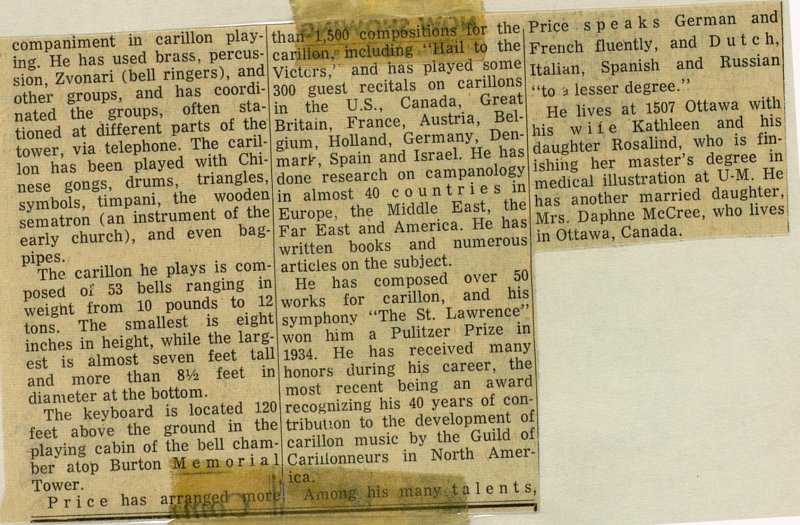 Percival Price, University carillonneur and professor of campanology, will add flavor to the 38th annual Christmas Pageant and Sing, to be held at 7:30 p.m. Wednesday in Hill Auditorium, when he plays familiar carols on the Charles Baird Carillon atop Burton Tower. His music will precede tomorrow's program at Hill for half an hour and will also follow it for a similar period. Price has been University carillonneur since 1939 when he succeeded Sidney F. Giles. He has been playing for the annual Christmas event since 1956. Price holds the distinction of being the first carillonneur to play on the North American Continent. He earned this unique position in 1922 when he began his duties at the Massey Memorial Carillon at Metropolitan United Church in Toronto, Canada. Three years later he became the carillonneur at the Laura Spelman Rockefeller Memorial Carillon (then in Park Avenue Baptist Church) in New York.
From 1927 to 1939, he was Dominion Carillonneur at the Peace Tower in the Houses of Parliament in Ottawa, Canada.
He played many guest recitals here before taking the University post in 1939. His present title of professor of campanology and University carillonneur was conferred by the regents in 1949. (Campanology is the science of bells in all aspects and in all cultures - which even includes the social aspects of a ringing telephone bell. )
Price has employed a wide variety of techniques and accompaniment in carillon playing. He has used brass, percussion, Zvonari (bell ringers), and other groups, and has coordinated the groups, often stationed at different parts of the tower, via telephone. The carillon has been played with Chinese gongs, drums, triangles, symbols, timpani, the wooden sematron (an instrument of the early church), and even bagpipes.
The carillon he plays is composed of 53 bells ranging in weight from 10 pounds to 12 tons The smallest is eight inches in height, while the largest is almost seven feet tall and more than 8 1/2 feet in diameter at the bottom.
The keyboard is located 120 feet above the ground in the playing cabin of the bell chamber atop Burton Memorial Tower.
Price has arranged more than 1,500 compositions for the carillon, including "Hail to the Victors '" and has played some 300 guest recitals on carillons in the U.S., Canada, Great Britain, France, Austria, Belgium, Holland, Germany Denmark, Spain and Israel. He has done research on campanology in almost 40 countries in Europe. the Middle East, the Far East and America. He has written books and numerous articles on the subject.
He has composed over 50 works for carillon, and his symphony "The St. Lawrence" won him a Pulitzer Prize in 1934. He has received many honors during his career, the most recent being an award recognizing his 40 years of contribution to the development of carillon music by the Guild of Carillonneurs in North America.
Among his many talents, Price speaks German and French fluently, and Dutch, Italian, Spanish and Russian "to a lesser degree."
He lives at 1507 Ottawa with his wife Kathleen and his daughter Rosalind, who is finishing her master's degree in medical illustration at U-M. He has another married daughter, Mrs. Daphne McCree, who lives, in Ottawa, Canada.