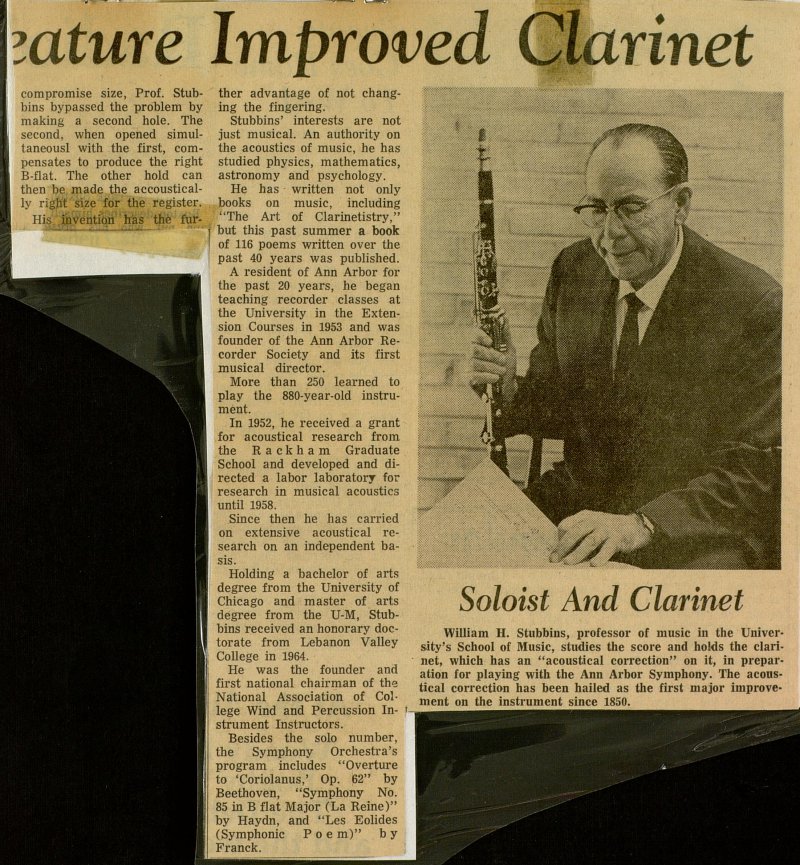 A clarinet which has what is hailed as the first major improvement on the instrument since 1850 will be played at the concert of the Ann Arbor Symphony at 4 p.m. Sunday (Nov. 26) in Ann Arbor High Schoa. The cla'inet will be played by Willian H. Stubbins, professor a music in the University'' School of Music. StubUns developed the "accoustical correction" for the clannet, which is considered the first major improvement since the adoption of the Boehm system clarinet in 1850. At the concert, Stubbins will play "Concerto for Clarinet and String Orchestra" by Gerald Finzi, an English composer who died in 1956 and whose music is of the romantic school. This will mark the first time the Finzi work has been performed in Ann Arbor. Stubbins solved a problem which baffled the clairnet world for 260 years by putting an extra hole in the back of the instrument. Placing of the hole required a secret formula dealing in thousandths of an inch and a mechanical device to open and close it. Ever since the clarinet was invented about 1690 and later introduced into the orchestral family by Mozart, -the B flat overtones, or harmonies, have been off-key. The sour notes creep in because, previously' one hole has been used for two purposes- B-flat and the upper register. A size which is right for the upper resttrLEys3hall ior the B-üxnfi riarWta. _Tnstea(I ofStfying to find a compromise size, Prof. Stubbins bypassed the problem by making a second hole. The second, when opened simultaneousl with the first, compensates to produce the right B-flat. The other hold can then be made the accoustically right size for the register. Mis i'nventiön has the ther advantage of not changing the fingering. Stubbins' interests are not just musical. An authority on the acoustics of music, he has studied physics, mathematics, astronomy and psychology. He has written not only books on music, including "The Art of Clarinetistry," but this past summer a book of 116 poems written over the past 40 years was published. A resident of Ann Arbor for the past 20 years, he began teaching recorder classes at the University in the Extensión Courses in 1953 and was founder of the Ann Arbor Recorder Society and its first musical director. More than 250 learned to play the 880-year-old instrument. In 1952, he received a grant for acoustical research from the Eackham Gradúate School and developed and directed a labor laboratory for research in musical acoustics until 1958. Since then he has carried on extensive acoustical research on an independent basis. Holding a bachelor of arts degree from the University of Chicago and master of arts degree from the U-M, Stubbins received an honorary doctórate from Lebanon Valley College in 1964. He was the founder and first national chairman of the National Association of College Wind and Percussion Instrument Instructors. Besides the solo number, the Symphony Orchestra's program includes "Overture to 'Coriolanus,' Op. 62" by Beethoven, "Symphony No. 85 in B flat Major (La Reine)" by Haydn, and "Les Eolides (Symphonic Poem)" by Franck.