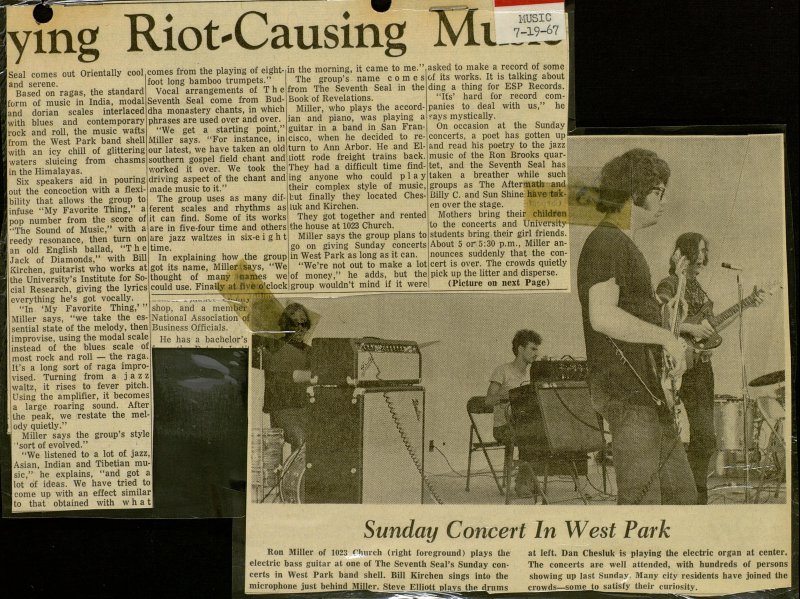 Seal comes out Orientally cool and serene. i Based on ragas, the standard Eorm of music in India, modal and dorian scales interlaced with blues and contemporary rock and roll, the music wafts from the West Park band shell with an icy chili of glittering waters sluicing from chasms in the Himalayas. Six speakers aid in pouring out the concoction with a flexibility that allows the group to infuse "My Favorite Thing," a pop number from the score of "The Sound of Music," with a reedy resonance, then turn on an old English ballad, "T h e Jack of Diamonds," with Bill Kirchen, guitarist who works at the University's Institute for Social Research, giving the lyricsl everything he's got vocally. "In 'My Favorite Thing,' Miller says, "we take the essential state of the melody, then improvise, using the modal scale instead of the blues scale of most rock and roll - the raga. It's a long sort of raga improvised. Turning from a jazz waltz, it rises to fever pitch. Using the amplifier, it becomes a large roaring sound. Af ter Ihe peak, we réstate the melody quietly." Miller says the group's style "sort of evolved." "We listened to a lot of jazz, Asian, Indian and Tibetian music," he explains, "and got a lot of ideas. We have tried to come up with an effect similar to that obtained with what comes from the playing of eightfoot long bamboo trumpets." Vocal arrangements of T h e Seventh Seal come from Buddha monastery chants, in which phrases are used over and over. "We get a starting point," Miller says. "For instance, in our latest, we have taken an old southern gospel field chant and vorked it over. We took the driving aspect of the chant and made music to it." The group uses as many different scales and rhythms as it can find. Some of its works are in five-four time and others are jazz waltzes in six-e i g h t time. In explaining how the group got its name, Millerisays, "We thought of many mames we Icould use. Finally at fivé jo'clock n the morning, it came to me." The group's name comes from The Seventh Seal in the Book of Revelations. Miller, who plays the accordan and piano, was playing a guitar in a band in San Francisco, when he decided to return to Ann Arbor. He and Elüott rode freight trains back. They had a difficult time findmg anyone who could p 1 a y their complex style of music, tut finally they located Chesluk and Kirchen. They got together and rented the house at 1023 Church. Miller says the group plans to go on giving Sunday concerts in West Park as long as it can. "We're not out to make a lot of money," he adds, but the group wouldn't mind if it were asked to make a record of some cf its works. It is talking about ding a thing for ESP Records. "lts' hard for record companies to deal with us," he ?ays mystically. On occasion at the Sundayl concerts, a poet has gotten up and read his poetry to the jazz music of the Ron Brooks quar-; tet, and the Seventh Seal hasj; taken a breather while suchjj groups as The Aftermath and Billy C. and Sun Shine have 1 en over the stage. Mothers bring their children to the concerts and University1 students bring their girl friends. About 5 or 5:30 p.m., Miller announces suddenly that the concert is over. The crowds quietly piek up the litter and disperse. (Picture on next Page)