(They've) Got The Blues 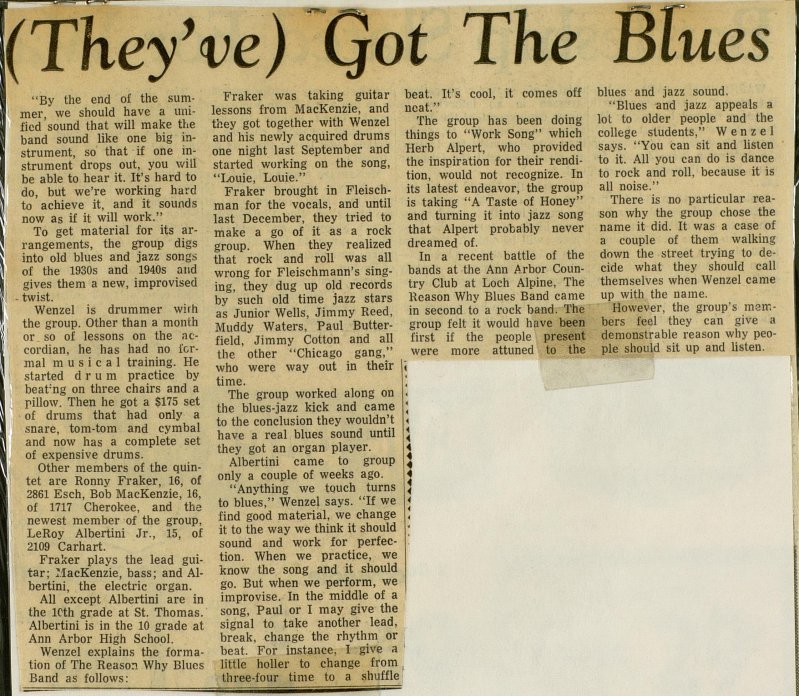 "By the end of the summer, we should have a tmified sound that will make the band sound like one big instrument, so that if one instrument drops out, you will be able to hear it. It's hard to do, but we're working hard to achieve it, and it sounds now as if it will work." To get material for its arrangements, the group digs into old blues and jazz songs of the 1930s and 1940s and gives them a new, improvised - twist. Wenzel is drummer wih the group. Other than a month or so of lessons on the accordian, he has had no formal musical training. He started drum practice by beat:ng on three chairs and a pillow. Then he got a $175 set of drums that had only a snare, tom-tom and cymbal and now has a complete set of expensive drums. Other members of the quintet are Ronny Fraker, 16, of 2861 Esch, Bob MacKenzie, 16, of 1717 Cherokee, and the newest member of the group, LeRoy Albertini Jr., 15, of 2109 Carhart. Fraker plays the lead guitar; MacKenzie, bass; and Albertini, the electric organ. All except Albertini are in the ICth grade at St. Thomas. Albertini is in the 10 grade at Ann Arbor High School. Wenzel explains the formation of The Reason Why Blues Band as follows: Fraker was taking guitar lessons from MacKenzie, and they got together with Wenzel and his newly acquired drums one night last September and started working on the song, "Louie, Louie." Fraker brought in Fleischman for the vocals, and until last December, they tried to make a go of it as a rock group. When they realized that rock and roll was all wrong for Fleischmann's singing, they dug up old records by such old time jazz stars as Junior Wells, Jimmy Reed, Muddy Waters, Paul Butterfield, Jimmy Cotton and all the other "Chicago gang," who were way out in their time. The group worked along on the blues-jazz kick and came to the conclusión they wouldn't have a real blues sound until they got an organ player. Albertini came to group only a couple of weeks ago. "Anything we touch turns to blues," Wenzel says. "If we find good material, we change it to the way we think it should sound and work for perfection. When we practice, we know the song and it should go. But when we perfora, we improvise. In the middle of a song, Paul or I may give the signal to take another lead, break, change the rhythm or beat. For instance, I give a litlle holler to change from . three-four time to a shuffle beat. It's cool, it comes off ncat." The group has been doing things to "Work Song" which Herb Alpert, who provided the inspiration for their rendition, would not recognize. In its latest endeavor, the group is taking "A Taste of Honey" and turning it into jazz song that Alpert probably never dreamed of. In a recent battle of the bands at the Ann Arbor Country Club at Loch Alpine, The Reason Why Blues Band came in second to a rock band. The group feit it would have been first if the people present were more attuned to the blues and jazz sound. "Blues and jazz appeals a lot to older people and the college students," Wen zei says. "You can sit and listen to it. All you can do is dance to rock and roll, because it is all noise." There is no particular reason why the group chose the name it did. It was a case of a couple of them walking down the street trying to decide what they should cali themselves when Wenzel came up with the name. However, the group's marr.bers feel they can give a demonstrable reason why people should sit up and listen.