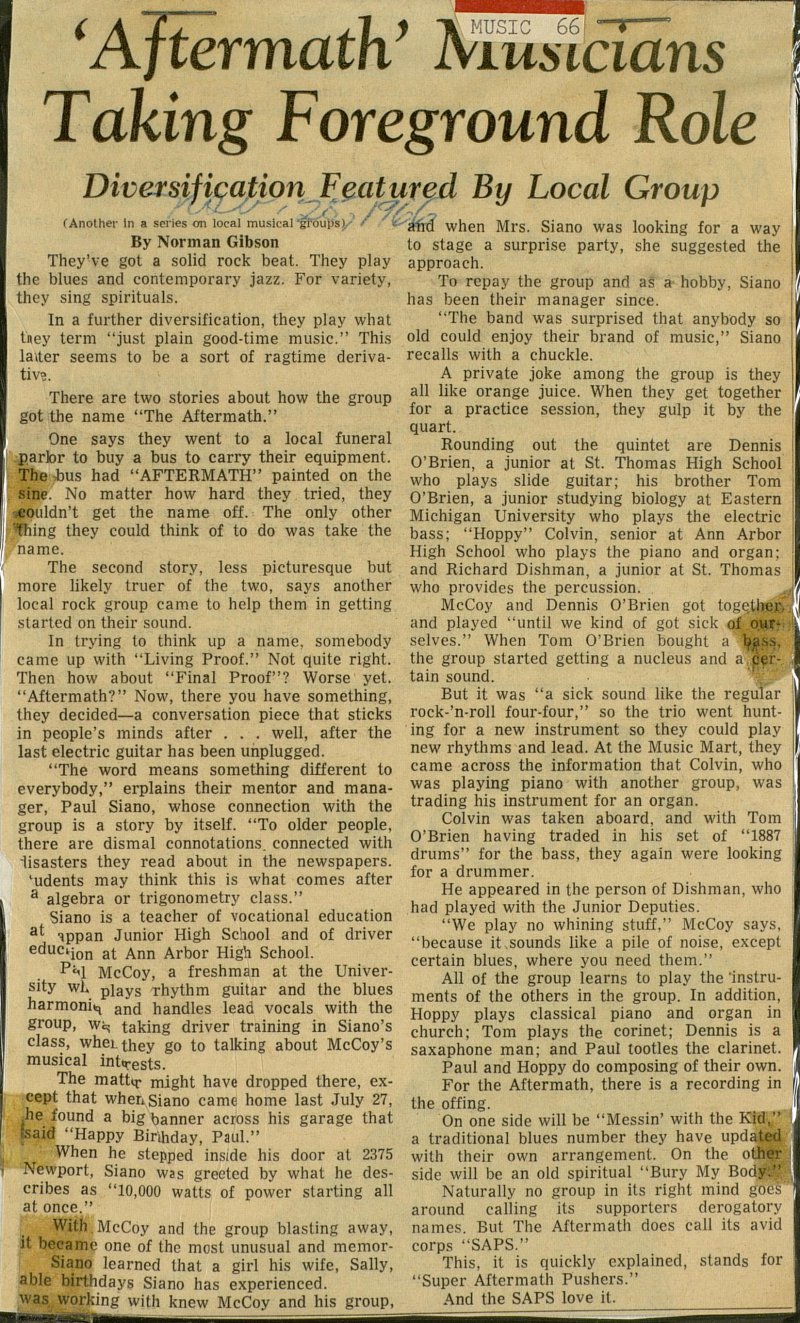 They've got a solid rock beat. They play the blues and contemporary jazz. For variety, they sing spirituals. In a further diversification, they play what taey term "just plain good-time music." This larter seems to be a sort of ragtime derivaÜV9. There are two stories about how the group got the name "The Aftermath." One says they went to a local funeral parlor to buy a bus to carry their equipment. The bus had "AFTERMATH" painted on the sine. No matter how hard they tried, they coLildn't get the name off. The only other ''ïhing they could think of to do was take the name. The second story, less picturesque but more likely truer of the two, says another local rock group carne to help them in getting starled on their sound. In trying to think up a name, somebody came up with "Living Proof." Not quite right. Then how about "Final Proof"? Worse yet. "Aftermath?" Now, there you have something, they decided- a conversation piece that sticks in people's minds after . . . well, after the last electric guitar has been unplugged. "The word means something different to everybody," erplains their mentor and manager, Paul Siano, whose connection with the group is a story by itself. "To older people, there are dismal connotations. connected with lisasters they read about in the newspapers. 'udents may think this is what comes after a algebra or trigonometry class." Siano is a teacher of vocational education a' ippan Junior High School and of driver educiion at Ann Arbor High School. ■Pl McCoy, a freshman at the University wl, piays Thythm guitar and the blues harmom an(j handles lead vocals with the group, wl, taking driver training in Siano's class, wheithey go to talking about McCoy's musical intn-ests. The might have dropped there, except that when Siano came home last July 27, Jie found a big banner across his garage that ïsaid "Happy Birihday, Paul." When he stepped inside his door at 2375 Newport, Siano was greeted by what he describes as "10,000 watts of power starting all at once." With.McCoy and the group blasting away, ït became one of the most unusual and memorSiano learned that a girl his wife, Sally, able birthdays Siano has experienced. was working with knew McCoy and his group, afid when Mrs. Siano was looking for a way to stage a surprise party, she suggested the approach. To repay the group anrl as a hobby, Siano has been their manager since. "The band was surprised that anybody so old could enjoy their brand of music," Siano recalls with a chuckle. A private joke among the group is they all like orange juiee. When they get together for a practice session, they gulp it by the quart. Rounding out the quintet are Dennis O'Brien, a junior at St. Thomas High School who plays slide guitar; his brother Torn O'Brien, a junior studying biology at Eastern Michigan University who plays the electric bass; "Hoppy" Colvin, senior at Ann Arbor High School who plays the piano and organ; and Richard Dishman, a junior at St. Thomas who provides the percussion. McCoy and Dennis O'Brien got togethejy and played "until we kind of got sick of Wt selves." When Torn O'Brien bought a Wss, the group started getting a nucleus and aMe-.,, tain sound. But it was "a sick sound like the regular rock-'n-roll four-four," so the trio went hunting for a new instrument so they could play new rhythms and lead. At the Music Mart, they came across the information that Colvin, who was playing piano with another group, was trading his instrument for an organ. Colvin was taken aboard, and with Torn O'Brien having traded in his set of "1887 drums" for the bass, they again were looking for a drummer. He appeared in the person of Dishman, who had played with the Junior Deputies. "We play no whining stuff," McCoy says, "because it sounds like a pile of noise, except certain blues, where you need them." All of the group learns to play the 'instruments of the others in the group. In addition, Hoppy plays classical piano and organ in church; Torn plays the corinet; Dennis is a saxaphone man; and Paul tootles the clarinet. Paul and Hoppy do composing of their own. For the Aftermath, there is a recording in the offing. On one side will be "Messin' with the Kid," a traditional blues number they have updated with their own arrangement. On the other side will be an old spiritual "Bury My Body;" Naturally no group in its right mind goes around calling its supporters derogatory names. But The Aftermath does cali its avid corps "SAPS." This, it is quickly explained, stands for "Super Aftermath Pushers." And the SAPS love it.