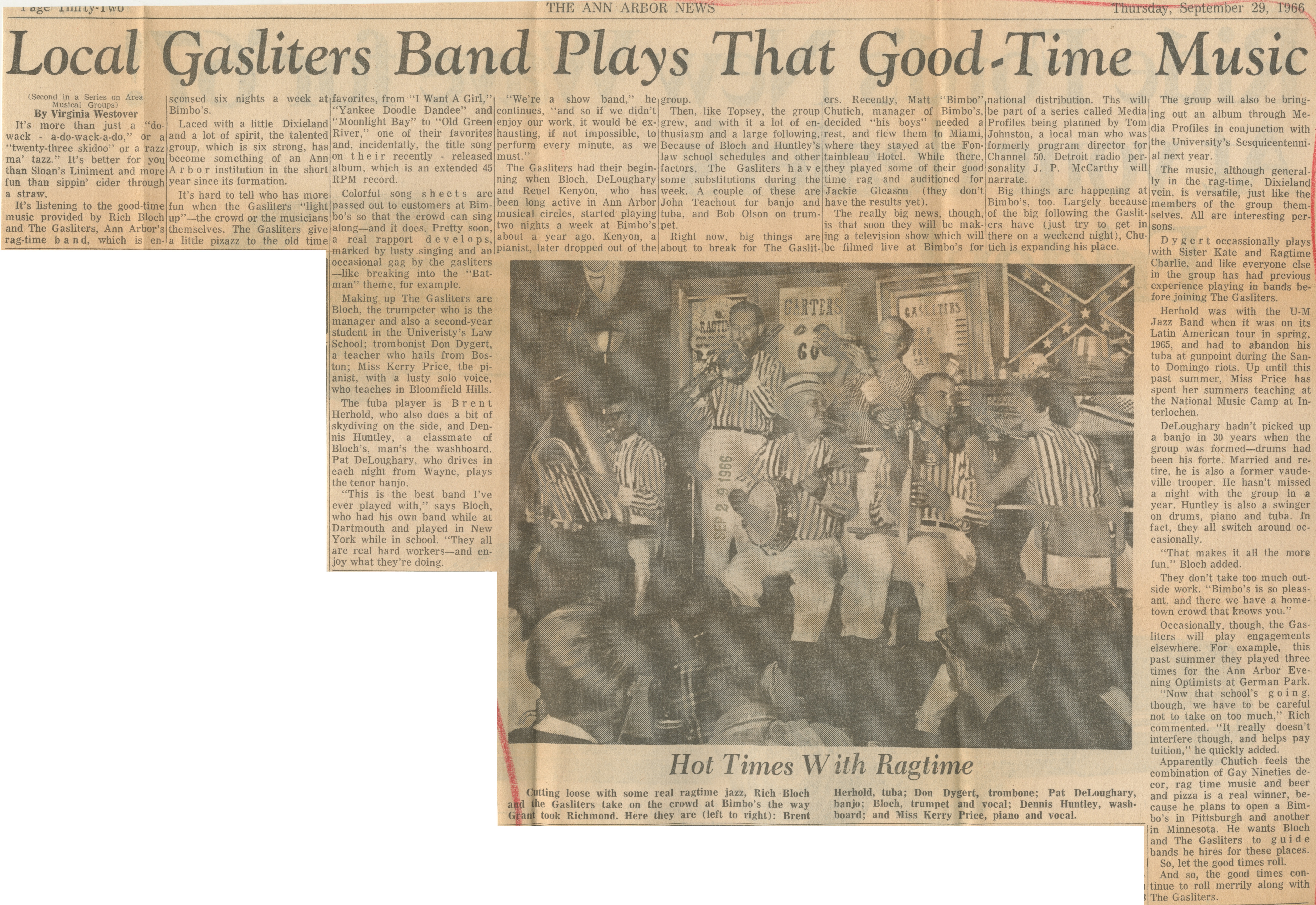 It's more than just a dowack - a-do-wack-a-do," or a "twenty-three skidoo" or a razz ma' tazz." It's better for you: than Sloan's Liniment and more fun than sippin' eider througn a straw. It's listening to the good-time music provided by Rich Bloch and The Gasliters, Ann Arbor's rag-time band, which is ensconse six nights a week & Bimbo's. "' Laced with a little Dixieland and a lot of spirit, the talented group, which is six strong, has become something of an Ann A r b o r institution in the short year since its formation. It's hard to teil who has more fun when the Gasliters "light up"- the crowd or the musicians themselves. ïhe Gasüters give a little pimz totheldjime avorïtes; trom -'I Want A Girl," 'Yankee Doodle Dandee" and 'Moonlight Bay" to "Old Green River," one of their favorites and, incidentally, the title song on their recently - released album, which is an extended 45 RPM record. Colorful song sheets are passed out to customers at Bimbo's so that the crowd can sing aiong-and it does. Pretty soon, a jSi rapport develops, maiitd by lusty singing and an ional gag by the gaslite#; -lïke breaking into the 'Bátman" theme, for example. Making up The Gasliters are Bloch, the trumpeter who is the manager and also a second-year student in the Univeristy's Law School; trombonist Don Dygert, a teacher who hails from Boston; Miss Kerry Price, the pianist, with a lusty solo voice, táho teaches in Bloomfield Hills. The tuba player is B r e n t Herhold, who also does a bit skydiving on the side, and E nis Huntley, a classmate of Bioch's, man's the washboard. Pat DeLoughary, who drives in each night from Wayne, plays the tenor banjo. I "This is the best band I've ever played with," says Bloch, who had his own band while at Dartmouth and played in New York while in school. "They jüL are real hard workers- and ej joy what they're doing. "We're a show band," he ' ontinues, "and so if we didn't ;njoy our work, it would be exaausting, if not impossible, to perform every minute, as we must." The Gasliters had their beginning when Bloch, DeLoughary and Reuel Kenyon, who has been long active in Ann Arbor musical circles, started playing two nights a week at Bimbo'sj about a year ago. Kenyon, a ■■ater droppedoutcH group Then, like Topsey, tne group grew', and with it a lot of en-j thusiasm and a large following. Because of Bloch and Huntley's law school schedules and other factors, The Gasliters have some substitutions during the' week. A couple of these are! John Teachout for banjo and tuba, and Bob Olson on trumpet. Right now, big things are about to break for The Gaslit jps. Rëceuüy, Matt "Bimbol! Chutich, manager of Bimbo's,] decided "his boys" needed a rest, and flew them to Miami, where they stayed at the Fon- tainbleau Hotel. White there, they played some of their good time rag and auditioned fori Jackie Gleason (they don't have the results yet). . The really big news, though, lis that soon they will be making a televisión show which vill ibe filmed live at Bimbo's for ational distribution. ThsTP be part of a series called Media Iprofiles being planned by Torn 'johnston, a local man who was formerly program director for Channel 50. Detroit radio personality J. P. McCarthy will nárrate. Big things are happening at Bimbo's, too. Largely because of the big following the Gashters have (just try tof1? there on a weekend night), cnu-j tickisjexpanding his place ' Tile group wül also bc ütiwaing out an album through Media Profiles in conjunction with the University's Sesquicentennial next year. The music, although generally in the rag-time, Dixieland vein, is versatile, just like the members of the group themselves. All are interesting perffips. D y g e r t occassionally plays with Sister Kate and Ragtime Charlie, and like everyone else iñ the group has had previous experience playing in bands before joining The Gasliters. Herhold was with the U-M Jazz Band when it was on its Latin American tour in spring, 1965, and had to abandon nis tuba at gunpoint during the Santo Domingo riots. Up until this past summer, Miss Price has spent her summers teaching at the National Music Camp at Interlochen.