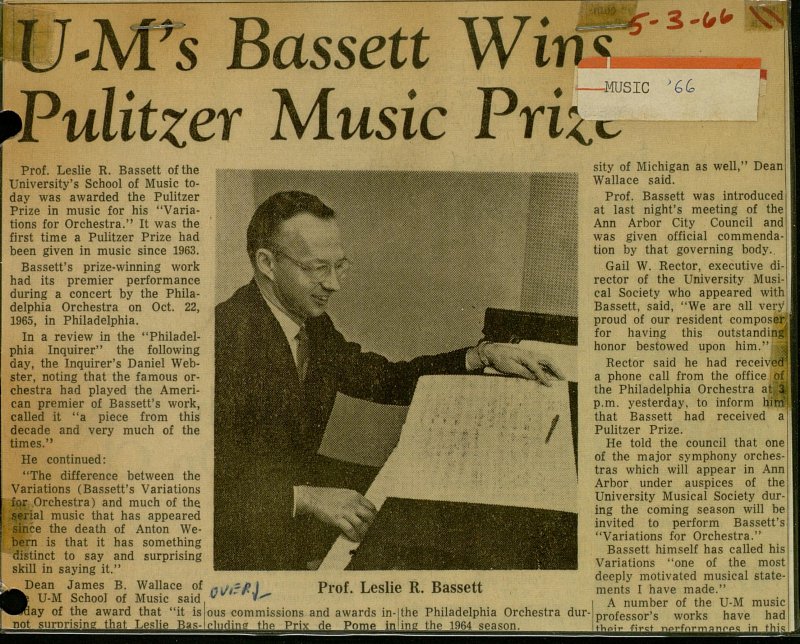 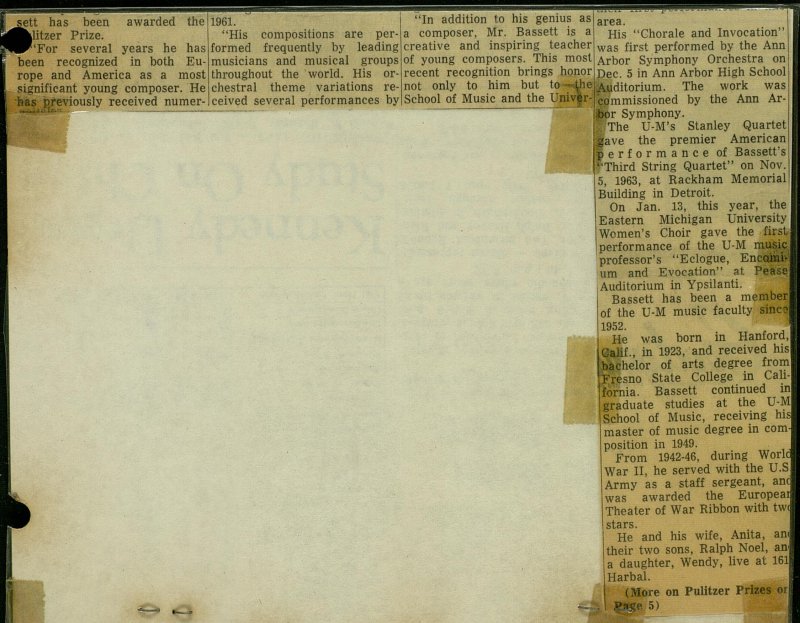 Prof. Leslie R. Bassett of the University's School of Music today was awarded the Pulitzer Prize in music for his "Variations for Orchestra." It was the first time a Pulitzer Prize had been given in music since 1963.
Bassett's prize-winning work had its premier performance during a concert by the Philadelphia Orchestra on Oct. 22, 1965, in Philadelphia.
In a review in the "Philadelphia Inquirer" the following day, the Inquirer's Daniel Webster, noting that the famous orchestra had played the American premier of Bassett's work, called it "a piece from this decade and very much of the times."
He continued: "The difference between the Variations (Bassett's Variations for Orchestra) and much of the serial music that has appeared since the death of Anton Webern is that it has something distinct to say and surprising skill in saying it."
Dean James B. Wallace of the U-M School of Music said today of the award that "it is not surprising that Leslie Bassett has been awarded the Pulitzer Prize.
"For several years he has been recognized in both Europe and America as a most significant young composer. He has previously received numerous commissions and awards including the Prix de Pome in 1961.
"His compositions are performed frequently by leading musicians and musical groups throughout the world. His orchestral theme variations received several performances by the Philadelphia Orchestra during the 1964 season.
"In addition to his genius as a composer, Mr. Bassett is a creative and inspiring teacher of young composers. This most recent recognition brings honor not only to him but to the School of Music and the University of Michigan as well," Dean Wallace said.
Prof. Bassett was introduced at last night's meeting of the Ann Arbor City Council and was given official commendation by that governing body.
Gail W. Rector, executive director of the University Musical Society who appeared with Bassett, said, "We are all very proud of our resident composer for having this outstanding honor bestowed upon him."
Rector said he had received a phone call from the office of the Philadelphia Orchestra at 2 p.m. yesterday, to inform him that Bassett had received a Pulitzer Prize.
He told the council that one of the major symphony orchestras which will appear in Ann Arbor under auspices of the University Musical Society during the coming season will be invited to perform Bassett's "Variations for Orchestra."
Bassett himself has called his Variations "one of the most deeply motivated musical statements I have made."
A number of the U-M music professor's works have had their first performances in this area.
His "Chorale and Invocation" was first performed by the Ann Arbor Symphony Orchestra oni Dec. 5 in Ann Arbor High School Auditorium. The work was commissioned by the Ann Arbor Symphony.
The U-M's Stanley Quartet gave the premier American performance of Bassett's "Third String Quartet" on Nov. 5, 1963, at Rackham Memorial Building in Detroit.
On Jan. 13, this year, the Eastern Michigan University Women's Choir gave the first performance of the U-M music professor's "Eclogue, Encombum and Evocation" at Pease Auditorium in Ypsilanti.
Bassett has been a member of the U-M music faculty since 1952.
He was born in Hanford, Calif., in 1923, and received his bachelor of arts degree from Fresno State College in California. Bassett continued in graduate studies at the U-M School of Music, receiving his master of music degree in composition in 1949.
From 1942-46, during World War II, he served with the U.S. Army as a staff sergeant, and was awarded the European Theater of War Ribbon with two stars.
He and his wife, Anita, and their two sons, Ralph Noel, and a daughter, Wendy, live at 1611 Harbal. (More on Pulitzer Prizes on Page 5)