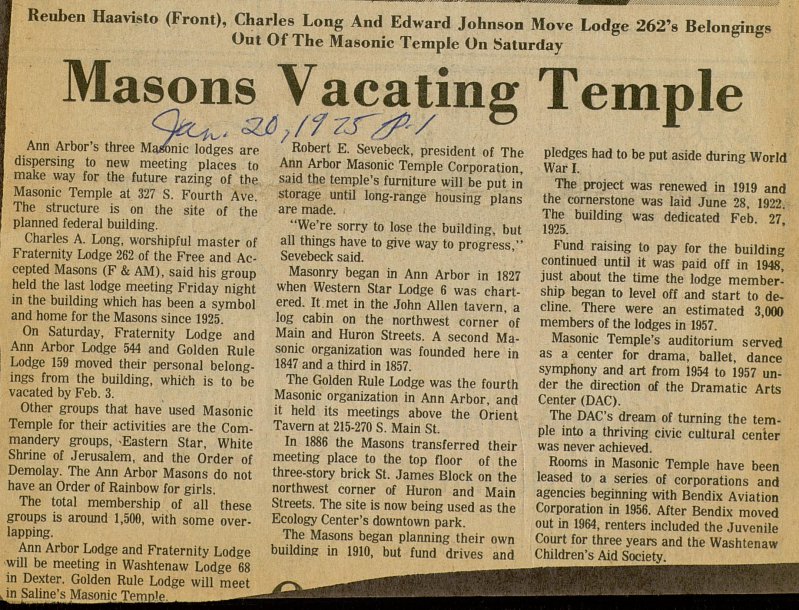 Ann Arbor's three Mabnic lodges are dispersing to new meeting places to make way for the future razing of the Masonic Temple at 327 S. Fourth Ave. The structure is on the site of the planned federal building. Charles A. Long, worshipful master of Fraternity Lodge 262 of the Free and Accepted Masons (F & AM), said his group held the last lodge meeting Friday night in the building which has been a symbol and home for the Masons since 1925. On Saturday, Fraternity Lodge and Ann Arbor Lodge 544 and Golden Rule Lodge 159 moved their personal belongings from the building, which is to be vacated by Feb. 3. Other groups that have used Masonic Temple for their activities are the Commandery groups, -Eastern Star, White Shrine of Jerusalem, and the Order of Demolay. The Ann Arbor Masons do not have an Order of Rainbow for girls. The total membership of all these groups is around 1,500, with some overlapping. Ann Arbor Lodge and Fraternity Lodge will be meeting in Washtenaw Lodge 68 in Dexter. Golden Rule Lodge will meet in Saline's Masonic T"mr'r ■- Robert E. Sevebeck, president of The Ann Arbor Masonic Temple Corporation, said the temple's furniture wil] be put in storage until long-range housing plans are made. "We're sorry to lose the building, but all things have to give way to progress," Sevebeck said. Masonry began in Ann Arbor in 1827 when Western Star Lodge 6 was chartered. It.met in the John Allen tavern, a log cabin on the northwest corner of Main and Hurón Streets. A second Masonic organization was founded here in 1847 and a third in 1857. The Golden Rule Lodge was the fourth Masonic organization in Ann Arbor, and it held its meetings above the Oriënt Tavern at 215-270 S. Main St. In 1886 the Masons transferred their meeting place to the top floor of the three-story brick St. James Block on the northwest corner of Hurón and Main Streets. The site is now being used as the Ecology Center's downtown park. The Masons began planning their own building in 1910, but fund drives and pledges had to be put aside during World War I. The project was renewed in 1919 and the cornerstone was Iaid June 28, 1922. The building was dedicated Feb 27 1925. Fund raising to pay for the building continued until it was paid off in 1948, just about the time the lodge membership began to level off and start to decline. There were an estimated 3,000 members of the lodges in 1957. Masonic Temple's auditorium served as a center for drama, ballet, dance symphony and art from 1954 to 1957 under the direction of the Dramatic Arts Center (DAC). The DAC's dream of turning the temple into a thriving civic cultural center was never achieved. Rooms in Masonic Temple have been leased to a series of corporations and agencies beginning with Bendix Aviation Corporation in 1956. After Bendix moved out in 1964, renters included the Juvenile Court for three years and the Washtenaw Children's Aid Society. _____