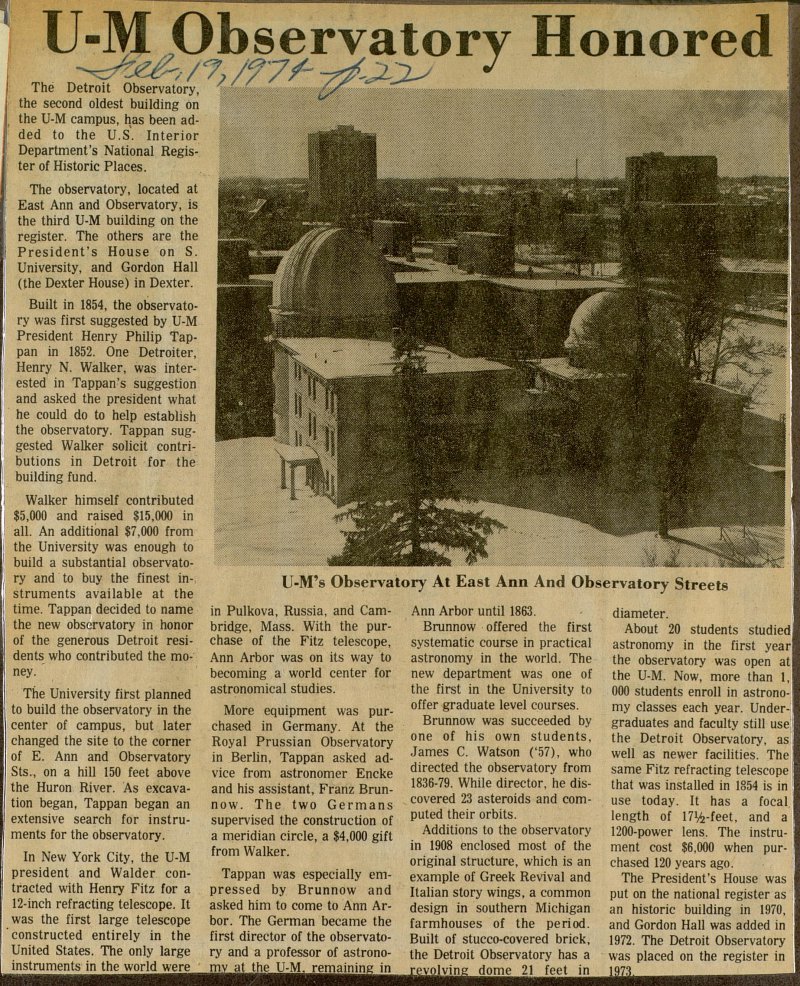 The Detroit Observatory, the second oldest building on the U-M campus, has been added to the U.S. Interior Department 's National Register of Historie Places. The observatory, located at East Ann and Observatory, is the third U-M building on the register. The others are the President's House on S. University, and Gordon Hall (the Dexter House) in Dexter. Built in 1854, the observatory was first suggested by U-M President Henry Philip Tappan in 1852. One Detroiter, Henry N. Walker, was interested in Tappan's suggestion and asked the president what he could do to help establish the observatory. Tappan suggested Walker solicit contributions in Detroit for the building fund. Walker himself contributed $5,000 and raised $15,000 in all. An additional $7,000 from the University was enough to build a substantial observatory and to buy the finest instruments available at the time. Tappan decided to name the new observatory in honor of the generous Detroit residents who contributed the money. The University first planned to build the observatory in the center of campus, but later changed the site to the corner of E. Ann and Observatory Sts., on a hill 150 feet above the Huron River. As excavation began, Tappan began an extensive search for instruments for the observatory. In New York City, the U-M president and Walder contracted with Henry Fitz for a 12-inch refracting telescope. It was the first large telescope constructed entirely in the United States. The only large instruments in the world were in Pulkova, Russia, and Cambridge, Mass. With the purchase of the Fitz telescope, Ann Arbor was on its way to becoming a world center for astronomical studies. More equipment was purchased in Germany. At the Royal Prussian Observatory in Berlin, Tappan asked advice from astronomer Encke and his assistant, Franz Brunnow. The two Germans supervised the construction of a meridian circle, a $4,000 gift from Walker. Tappan was especially empressed by Brunnow and asked him to come to Ann Arbor. The Germán became the first director of the observatory and a professor of astronomy at the U-M, remaining in Ann Arbor until 1863. Brunnow offered the first systematic course in practical astronomy in the world. The new department was one of the first in the University to offer gradúate level courses. Brunnow was succeeded by one of his own students, James C. Watson ('57), who directed the observatory from 1836-79. While director, he discovered 23 asteroids and computed their orbits. Additions to the observatory in 1908 enclosed most of the original structure, which is an example of Greek Revival and Italian story wings, a common design in southern Michigan farmhouses of the period. Built of stucco-covered brick, the Detroit Observatory has a revolving dome 21 feet in diameter. About 20 students studied astronomy in the first yearj the observatory was open atl the U-M. Now, more than 1, 000 students enroll in astronomy classes each year. Undergraduates and faculty still use! the Detroit Observatory, as well as newer facilities. The same Fitz refracting telescope that was installed in 1854 is in use today. It has a focal length of 17%-feet, and a 1200-power lens. The instrument cost $6,000 when purchased 120 years ago. The President's House was put on the national register as an historie building in 1970, and Gordon Hall was added in 1972. The Detroit Observatory was placed on the register in