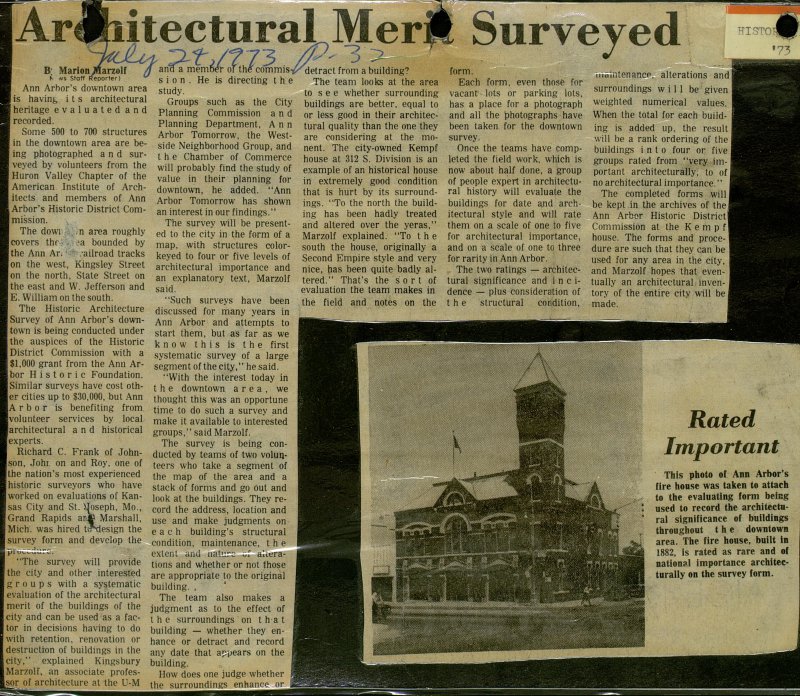 Ann Arhor's downtown area [ is havinj, i t s architectural I heritage evaluated and I recorded. Some 500 to 700 struetures in the downtown area are being photographed and surveyed by volunteers from the Huron Valley Chapter of the American Institute of Architects and members of Ann Arbor's Historie District Commission. The dowi . n area roughly covers thr . a bounded by the Ann Ar. ailroad tracks on the west, Kingsley Street on the north, State Street on the east and W. Jefferson and E. William on the south. The Historie Architecture Survey of Ann Arbor's downtown is being conducted under the auspices of the Historie District Commission with a $1,000 grant from the Ann Arbor Historie Foundation. Similar surveys have cost other cities up to $30,000, but Ann A r b o r is benefiting from volunteer services by local architectural and historical experts. ! Richard C. Frank of Johnson, Johr. on and Roy, one of the nation's most experienced historie surveyors who have worked on evaluations of KanIsas City and St. ijoseph, Mo., Grand Rapids anJP Marshall, Mich. was hired tdesign the survey form and develop the pi u-Cürc "The survey will provide the city and other interested g r o u p s with a systematic evaluation of the architectural merit of the buildings of the city and can be used as a factor in decisions having to do with retention, renovation or destructton of buildings in the city," explained Kingsbury Marzolf, an associate professor of architecture at the U-M I and a memBer of the commis- s i o n . He is directing t h e study. Groups such as the City Planning Commission and Planning Department, A n n Arbor Tomorrow, the Westside Neighborhood Group, and the Chamber of Commerce will probably find the study of valué in their planning for downtown, he added. "Ann Arbor Tomorrow has shown an interest in our findings." The survey will be presented to the city in the form of a map, with structures colorkeyed to four or five levéis of architectural importance and an explanatory text, Marzolf said. "Such surveys have been discussed for many years in Ann Arbor and attempts to start them, but as f ar as we know this is the first systematic survey of a large segment of the city," hesaid. "With the interest today in the downtown a r e a , we thought this was an opportune time to do such a survey and make it available to interested groups," said Marzolf. The survey is being conducted by teams of two volunteers who take a segment of the map of the área and a stack of forms and go Out and look at the buildings. They record the address, location and use and make judgments on e a c h building's structural condition, maintenance, the extent and nature oí allerations and whether or not those are appropriate to the original building. , The team also makes a judgment as to the effect of the surroundings on t h a t building - whether they enhance or detract and record any date that appears on the building. How does one judge whether the surroundings enhance or detract from a building? The team looks at the area to s e e whether surrounding buildings are better, equal to or less good in their archkectural quality than the one they are considering at the monent. The city-owned Kempf house at 312 S. División is an example of an historical house in extremely good condition that is hurt by its surroundings. "To the north the building has been hadly treated and altered over the yeras," Marzolf explained. "To the south the house, originally a Second Empire style and very nice, has been quite badly altered." That's the sort of jvaluation the team makes in the field and notes on the form. Each form, even thosë for lots or parking lots, has a place for a photograph and all the photographs have been taken for the downtown survey. Once the teams have completed the field work, which is now about half done, a group of people expert in architectural history will evalúate the buildings for date and architectural style and will rate them on a scale of one to five for architectural importance, and on a scale of one to three for rarity in Ann Arbor. The two ratings - architectural significance and i n c idence - plus consideration of t h e structural condition, uïaintenance, alterations and surroundings w i 1 1 be given weighted numerical values. When the total for each building is added up, the result will be a rank ordering of the buildings i n t o four or five groups rated from "very important architeeturally, to of no architectural importance. ' ' I The completed forms will I be kept in the archives of thel Ann Arbor Historie District! Commission at the K e m p f I house. The forms and 1 dure are such that they can be I used for any area in the city, and Marzolf hopes that eventually an architectural 1 tory of the entire city will be 1 made.