He Sticks Close To Home 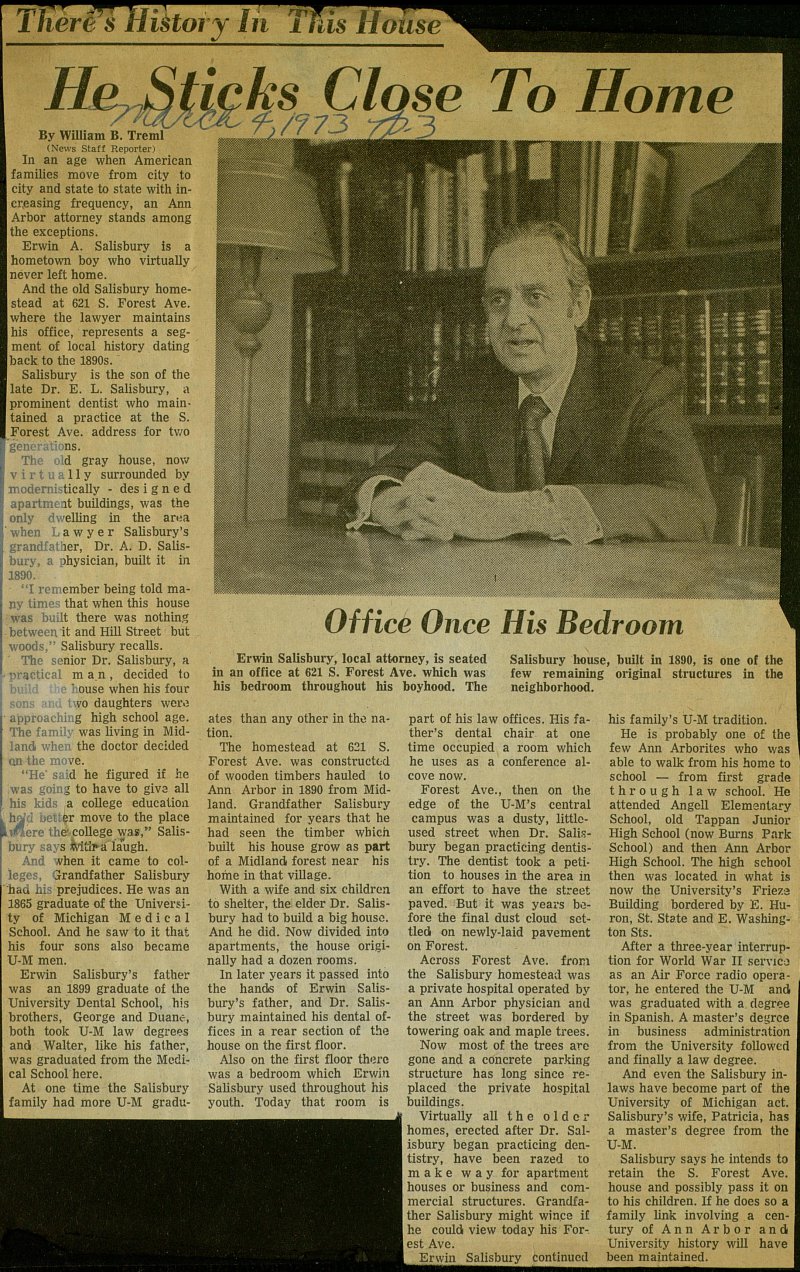 In an age when American families move from city to city and state to state with incr.easing frequency, an Ann Arbor attorney stands among the exceptions. Erwin A. Salisbury is a hometown boy who virtually never left home. And the old Salisbury homestead at 621 S. Forest Ave. where the lawyer maintains his office, represents a segment of local history dating back to the 1890s. Salisbury is the son of the late Dr. E. L. Salisbury, a prominent dentist who maintained a practice at the S. Forest Ave. address for tvo generations. The old gray house, now virtually surrounded by modernistically - des i g n e d apartment buildings, was the only dvelling in the arna when Lawyer Salisbury's grandfather, Dr. A. D. Salisbury, a physician, built it in 1890. "I remember being told many times that when this house was built there was nothing betweeuit and Hill Street but woods," Salisbury recalls. The senior Dr. Salisbury, a practical m an , decided to build f Louse when his four sóns and two daughters wer.3 approaching high school age. The family was living in Midland when the doctor decided an the move. "He' said he figured if he was going to have to giva all his kids a college education ha'd better move to the place vffiere the' college was," Salisbury says wiüM laugh. And when it carne to colleges, Grandfather Salisbury had his prejudices. He vas an 1865 gradúate of the University of Michigan Medical School. And he saw to it that his four sons also became U-M men. Erwin Salisbury's father was an 1899 gradúate oí the University Dental School, his brothers, George and Duane, both took U-M law degrees and Walter, like his father, was graduated from the Medical School here. At one time the Salisbury family had more U-M ates than any other in the nation. The homestead at 621 S. Forest Ave. was constructod of wooden timbers hauled to Ann Arbor in 1890 from Midland. Grandfather Salisbury maintained for years that he had seen the timber which built his house grow as part of a Midland forest near his home in that village. With a wife and six childrea to shelter, the eider Dr. Salisbury had to build a big house. And he did. Now divided into apartments, the house originally had a dozen rooms. In later years it passed into the hands of Erwin Salisbury's father, and Dr. Salisbury maintained his dental offices in a rear section of the house on the first floor. Also on the first floor there was a bedroom which Erwin Salisbury used throughout his youth. Today that room is part of his law offices. His father's dental chair at one time occupied a room which he uses as a conference alcove now. Forest Ave., then on the edge of the U-M's central campus was a dusty, littleused street when Dr. Salisbury began practicing dentistry. The dentist took a petition to houses in the area in an effort to have the street paved. But it was years böfore the final dust cloud settled on newly-laid pavement on Forest. Across Forest Ave. from the Salisbury homestead was a private hospital operated by an Ann Arbor physician and the street was bordered by towering oak and maple trees. Now most of the trees are gone and a concrete parking structure has long since replaced the private hospital buildings. Virtually all the older homes, erected after Dr. Salisbury began practicing dentistry, have been razed to m a k e way for apartment houses or business and commercial structures. Grandfather Salisbury might win.ce if he couldi view today his Forest Ave. Erwin Salisbury continued his family's U-M tradition. He is probably one of the few Ann Arborites who was able to walk from his homo to school - from first grade through law school. He attended Angelí Elemenlary School, old Tappan Junior High School (now Burns Park School) and then Ann Arbor High School. The high school then was located in what is now the University's Frieza Building bordered by E. Huron, St. State and E. Washington Sts. After a three-year interruption for World War II servicia as an Air Force radio operator, he entered the U-M and was graduated with a degree in Spanish. A master's degree in business administration from the University followed and finally a law degree. And even the Salisbury inlaws have become part of the University of Michigan act. Salisbury's wife, Patricia, has a master's degree from the U-M. Salisbury says he intends to retain the S. Forest Ave. house and possibly pass it on to his children. If he does so a family link involving a century of Ann Arbor and University history will have been maintained.