Real Estate Board Will Use Computer To Locate Homes 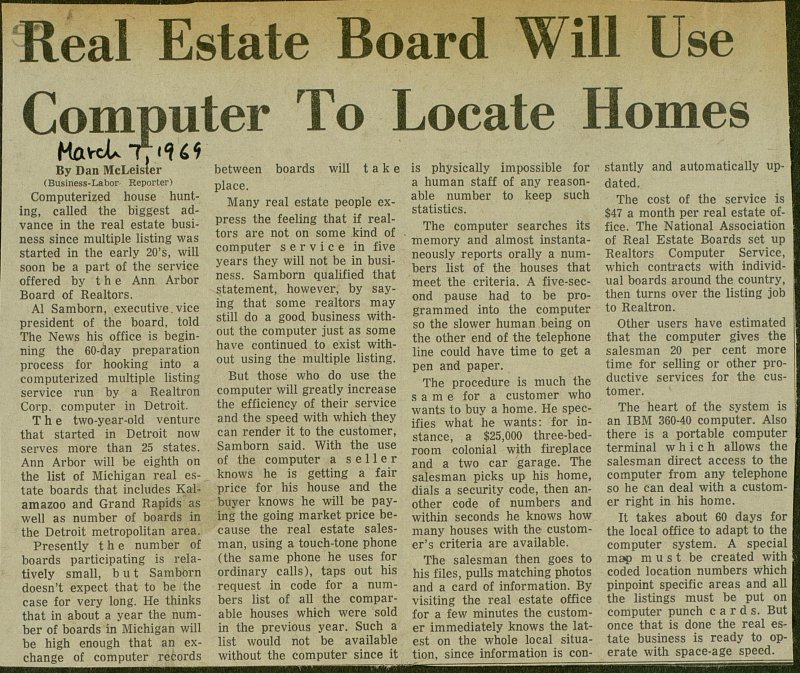 Computerized house hunting, called the biggest advance in the real estáte business since multiple listing was started in the early 20's, will soon be a part of the service offered by the Ann Arbor Board of Realtors. Al Samborn, executive . vice president of the board, told The News his office is beginning the 60-day preparation process for hooking into a computerized multiple listing service run by a Realtron Corp. computer in Detroit. The two-year-old venture that started in Detroit now serves more than 25 states. Ann Arbor will be eighth on the list of Michigan real . tate boards that includes Kalamazoo and Grand Rapids as well as number of boards in the Detroit metropolitan area. Presently the number of boards participating is relatively small, b u t Samborn doesn't expect that to be the case for very long. He thinks that in about a year the number of boards in Michigan will be high enough that an exchange of computer records between boards will t a k e place. Many real estáte people express the feeling that if realtors are not on some kind of computer service in five years they will not be in business. Samborn qualified that statement, however, by saying that some realtors may still do a good business without the computer just as some have continued to exist without using the multiple listing. But those who do use the computer will greatly increase the efficiency of their service and the speed with which they can render it to the customer, Samborn said. With the use of the computer a s e 1 1 e r knows he is getting a fair price for his house and the buyer knows he will be paying the going market price because the real estáte salesman, using a touch-tone phone (the same phone he uses for ordinary calis), taps out his request in code for a numbers list of all the comparable houses which were sold in the previous year. Such a list would not be available without the computer since it is physically impossible for a human staff of any reasonable number to keep such statistics. The computer searches its memory and almost instantaneously reports orally a numbers list of the houses that meet the criteria. A five-second pause had to be programmed into the computer so the slower human being on the other end of the telephone line could have time to get a pen and paper. The procedure is much the same for a customer who wants to buy a home. He specifies what he wants: for instance, a $25,000 three-bedroom colonial with fireplace and a two car garage. The salesman picks up his home, dials a security code, then another code of numbers and within seconds he knows how many houses with the customer's criteria are available. The salesman then goes to his files, pulls matching photos and a card of information. By visiting the real estáte office for a few minutes the customer immediately knows the latest on the whole local situation, since information is stantly and automatically updated. The cost of the service is $47 a month per real estáte office. The National Association of Real Estáte Boards set up Realtors Computer Service, which contracts with individual boards around the country, then turns over the listing job to Realtron. Other users have estimated that the computer gives the salesman 20 per cent more time for selling or other productive services for the customer. The heart of the system is an IBM 360-40 computer. Also there is a portable computer terminal which allows the salesman direct access to the computer from any telephone so he can deal with a customer right in his home. It takes about 60 days for the local office to adapt to the computer system. A special map must be created with coded location numbers which pinpoint specüic areas and all the listings must be put on computer punch c a r d s. But once that is done the real estáte business is ready to operate with space-age speed.