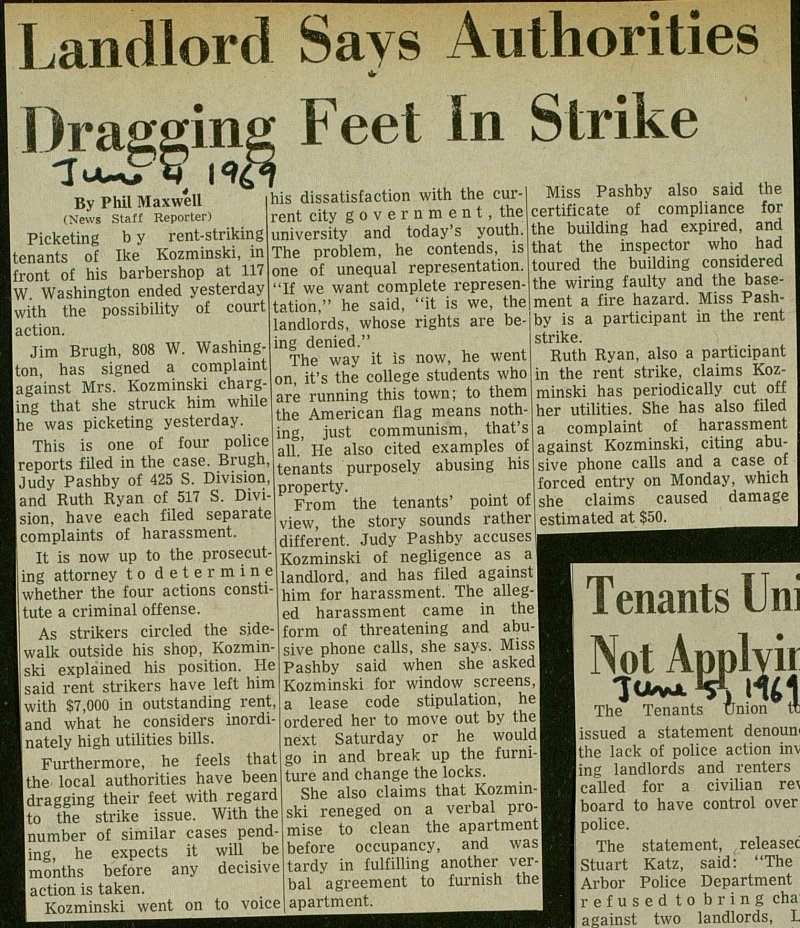 Picketing b y rent-striking ;enants of Ike Kozminski, in Eront of his barbershop at 117 W. Washington ended yesterday with the possibility of court action. Jim Brugh, 808 W. Washington, has signed a complaint against Mrs. Kozminski charging that she struck him white he was picketing yesterday. This is one of four pólice reports filed in the case. Brugh, Judy Pashby of 425 S. División, and Ruth Ryan of 517 S. División, have each filed separate com'plaints of harassment. It is now up to the prosecutng attorney to determine whether the four actions constitute a criminal offense. As strikers circled the sidewalk outside his shop, Kozminski explained his position. He said rent strikers have left him with $7,000 in outstanding rent, and what he considers inordinately high utilities bilis. Furthermore, he feels that the local authorities have been dragging their feet with regard to the strike issue. With the number of similar cases pending, he expects it will be months before any decisive action is taken. Kozminski went on to voice lis dissatisfaction with the current city government, the university and today's youth. The problem, he contends, is one of unequal representation. "If we want complete representation," he said, "it is we, the landlords, whose rights are being denied." The way it is now, he went on, it's the college students who are running this town; to them the American flag means nothng, just communism, that's all. He also cited examples of tenants purposely abusing his property. From the tenants' pomt of áew, the story sounds rather ( lifferent. Judy Pashby accusesk Kozminski of negligence as al landlord, and has filed againstl him for harassment. The alleg-l ed harassment carne in thel form of threatening and abu-l sive phone calis, she says. Miss Pashby said when she asked Kozminski for window screens, a lease code stipulation, he ordered her to move out by the next Saturday or he would go in and break up the furniture and change the locks. She also claims that Kozminski reneged on a verbal promise to clean the apartment before occupancy, and wasj tardy in fulfilling another verbal agreement to furnish the apartment. Miss Pashby also said the certifícate of compliance for ;he building had expired, and that the inspector who had toured the building considered the wiring faulty and the basement a fire hazard. Miss Pashby is a participant in the rent strike. Ruth Ryan, also a participant in the rent strike, claims Kozminski has periodically cut off her Utilities. She has also filed a complaint of harassment against Kozminski, citing abusive phone calis and a case of forced entry on Monday, which she claims caused damage estimated at $50.