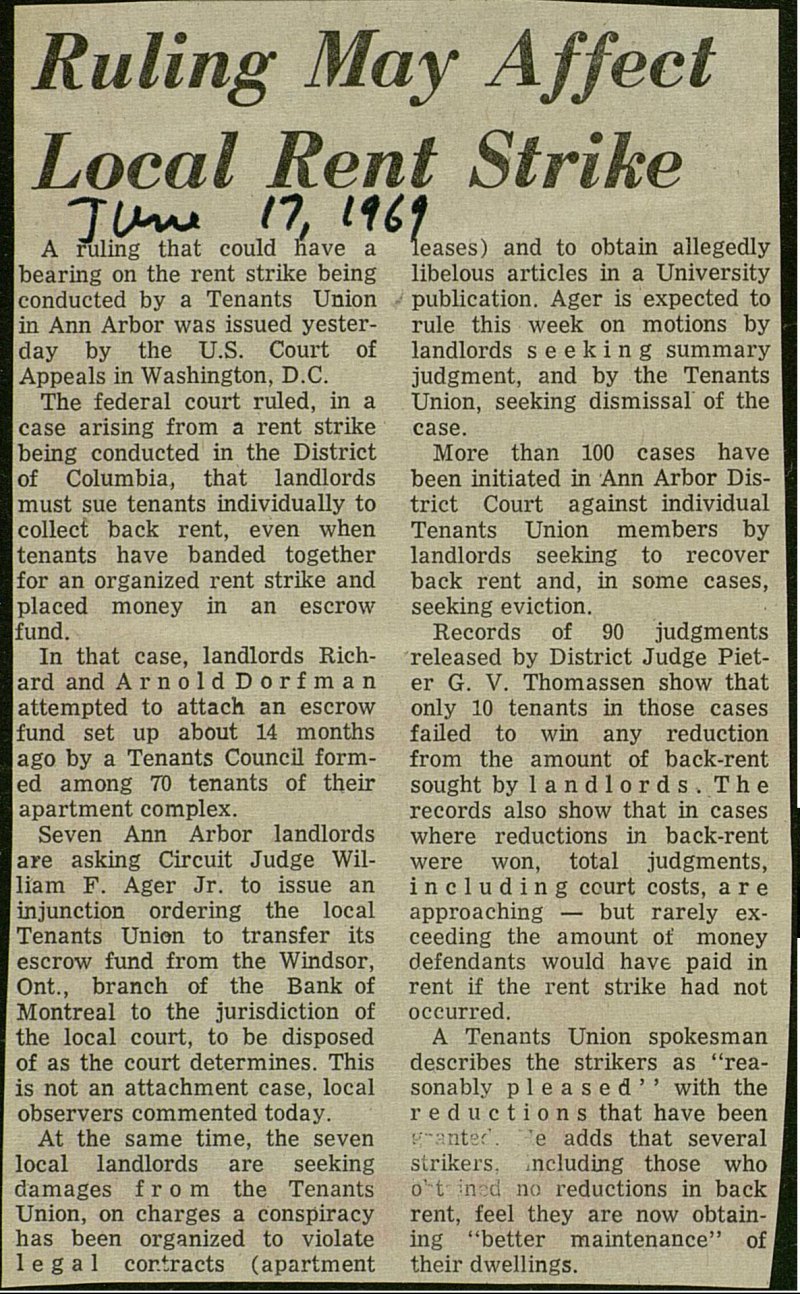 ■ - w A ruling that could have a bearing on the rent strike being conducted by a Tenants Union in Ann Arbor was issued yesterday by the U.S. Court of Appeals in Washington, D.C. The federal court ruled, in a case arising from a rent strike being conducted in the District of Columbia, that landlords must sue tenants individually to collect back rent, even when tenants have banded together for an organized rent strike and placed money in an escrow fund. In that case, landlords Richard and ArnoldDorfman attempted to attach an escrow fund set up about 14 months ago by a Tenants Council formed among TO tenants of their apartment complex. Seven Ann Arbor landlords are asking Circuit Judge William F. Ager Jr. to issue an injunction ordering the local Tenants Union to transfer its escrow fund from the Windsor, Ont, branch of the Bank of Montreal to the jurisdiction of the local court, to be disposed of as the court determines. This is not an attachment case, local observers commented today. At the same time, the seven local landlords are seeking damages from the Tenants Union, on charges a conspiracy has been organized to viólate legal cor.tracts (apartment íeases) and to obtain allegedly libelous articles in a University publication. Ager is expected to rule this week on motions by landlords s e e k i n g summary judgment, and by the Tenants I Union, seeking dismissal of the case. More than 100 cases have been initiated in Ann Arbor District Court against individual Tenants Union members by landlords seeking to recover back rent and, in some cases, seeking eviction. Records of 90 judgments released by District Judge Pieter G. V. Thomassen show that only 10 tenants in those cases failed to win any reduction from the amount of back-rent sought by landlords. The records also show that in cases where reductions in back-rent were won, total judgments, including ccurt costs, are approaching - but rarely exceeding the amount of money defendants would have paid in rent if the rent strike had not occurred. A Tenants Union spokesman describes the strikers as "reasonably p 1 e a s e d ' ' with the reductions that have been Tantee', 'e adds that several strikers. including those who o' t insd no reductions in back rent, feel they are now obtaining "better maintenance" of their dwellings.