Co-op Housing Project To Have 133 Units 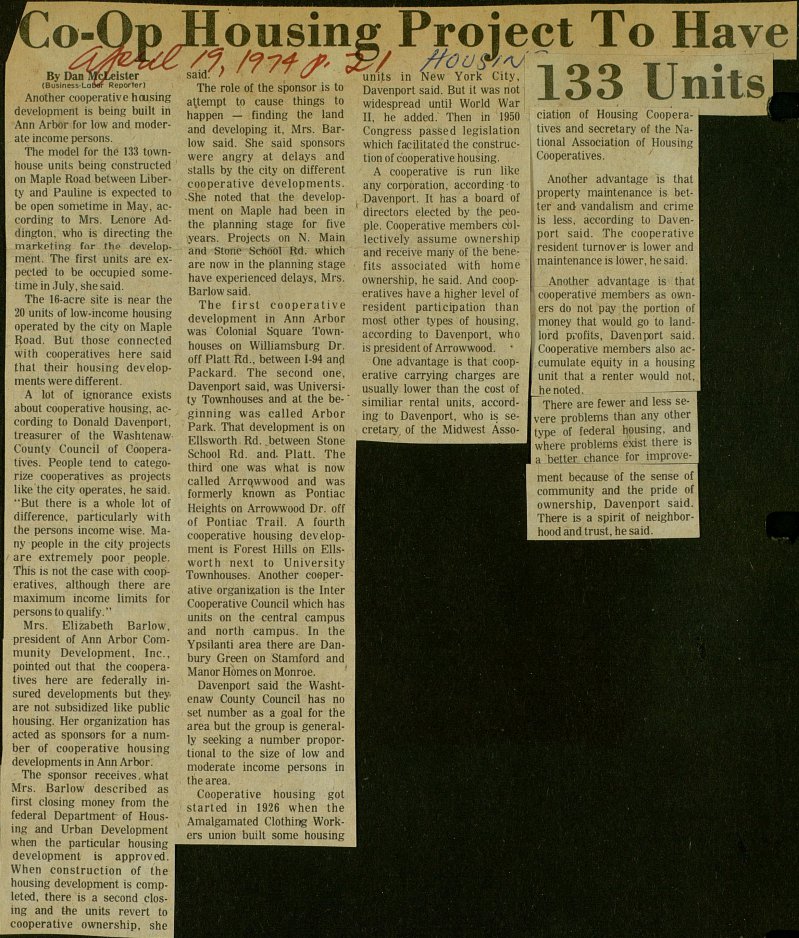 Another cooperative housing development is being built in Ann Arbor for low and moderate income persons. The model for the 133 townhouse units being constructed on Maple Road between Liberty and Pauline is expected to be open sometime in May, according to Mrs. Lenore Addington, who is directing the marketing for the development. The first units are expected to be occupied sometime in July.she said. The 16-acre site is near the 20 units of low-income housing operated by the city on Maple Road. But those connected with cooperatives here said that their housing developments were different. A lot of ignorance exists about cooperative housing, according to Donald Davenport, treasurer of the Washtenaw County Council of Cooperatives. People tend to categorize cooperatives as projects like the city operates, he said. "But there is a whole lot of difference, particularly with the persons income wise. Many people in the city projects are extremely poor people. This is not the case with cooperatives, although there are maximum income limits for persons toqualify." Mrs. Elizabeth Barlow, president of Ann Arbor Community Development, Inc., pointed out that the cooperatives here are federally irtsured developments but they. are not subsidized like public housing. Her organization has acted as sponsors for a number of cooperative housing developments in Ann Arbor. The sponsor receives. what Mrs. Barlow described as first closing money from the federal Department of Housing and Urban Development when the particular housing i development is approved. When construction of the housing development is completed, there is a second closing and the units revert to cooperative ownership, she The role of the sponsor is to ayempt to cause things to happen - finding the land and developing it, Mrs. Barlow said. She said sponsors were angry at delays and stalls by the city on different cooperative developments. -She noted that the development on Maple had been in the planning stage for five years. Projects on N. Main and Stone School Rd. which are now in the planning stage have experienced delays, Mrs. Barlow said. The first cooperative development in Ann Arbor was Colonial Square Townhouses on Williamsburg Dr. off Platt Rd., between 1-94 and Packard. The second one, Davenport said, was University Townhouses and at the ' ginning was called Arbor Park. That development is on Ellsworth Rd. .between Stone School Rd. and. Platt. The third one was what is now called Arrqwwood and was formerly known as Pontiac Heights on Arrowwood Dr. off of Pontiac Trail. A fourth cooperative housing development is Forest Hills on Ellsworth next to University Townhouses. Another coeperative organi?ation is the ínter Cooperative Council which has units on the central campus and north campus. In the Ypsilanti area there are Danbury Green on Stamford and Manor Homes on Monroe. Davenport said the Washtenaw County Council has no set number as a goal for the area but the group is generally seeking a number proportional to the size of low and moderate income persons in the area. Cooperative housing got started in 1926 when the Amalgamated Clothing Workers union built some housing f f y-f '-' O ' v unifs in New York City, Davenport said. But it was not widespread until World War II, he added. Then in 1950 Congress passed legislation which facilitated the construction of cooperative housing. A cooperative is run like any Corporation, according to Davenport. It has a board of directors elected by the people. Cooperative members cöllectively assume ownership and receive many of the benefits associated with home ownership, he said. And cooperatives have a higher level of resident participation than most other types of housing, according to Davenport, who is president of Arrowwood . One advantage is that cooperative carrying charges are usually lower than the cost of similiar rental units, according to Davenport, who is secretary, of the Midwest ciation of Housing ■ tives and secretary of the I tional Association of Housing I , Cooperatives. Another advantage is that I property maintenance is 1 i ter and vandalism and crime I is less, according to I port said. The cooperative I resident turnover is lower and I maintenance is lower, he said. Another advantage is that ' cooperative members as 1 ers do not pay the portion of I I money that would go to land lord profits, Davenport said. ; Cooperative members also ac cumúlate equity in a housing unit that a renter would not, _h e noted . J There are fewer and less I vere problems than any other I type of federal housing, and I where problems exist there is I I a bLtter_chance for I ment because of the sense of I community and the pride of I ownership, Davenport said. I There is a spirit of 1 hood and trust , he said .