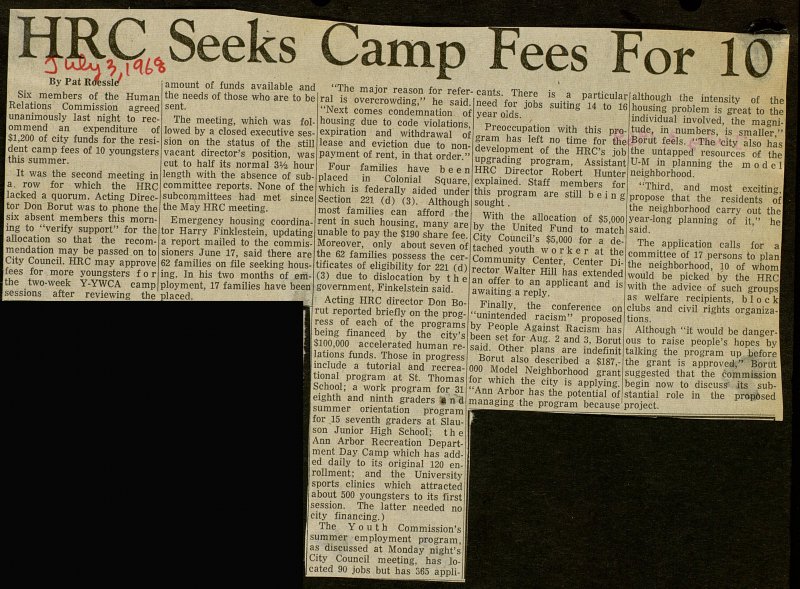 Six members of the Human Relations Commission agreec unanimously last night to reeom mend an expenditure of $1,200 of city funds for the resident camp fees of 10 youngsters this summer. It was the second meeting in a. row for whieh the HRC lacked a quorum. Acting Director Don Borut was to phone the six absent members this morning to "verify support" for the allocation so that the recommendation may be passed on to City Council. HRC may approve Eees for more youngsters for the two-week Y-YWCA camp essions after reviewing the amount of funds available and the needs of those who are to be sent. The meeting, which was fol Iowed by a closed executive ses sion on the status of the still vacant director's position, was cut to half its normal 3V& hour length with the absence of subcommittee reports. None of the subcoinmittees had met since the May HRC meeting. Emergency housing coördinator Harry Finklestein, updating a report mailed to the commissioners June 17, said there are !2 families on füe seeking housng. In his two months of employment, 17 families have been "The major reason for referral is overcrowding," he said "Next comes condemnation o housing due to code violations, expiration and withdrawal of lease and eviction due to nonpayment of rent, in that order." Four families have been placed in Colonial Square which is federally aided under Section 221 (d) (3). Although most families can afford the rent in such housing, many are jnable to pay the $190 share fee. Woreover, only about seven of :he 62 families possess the cerificates of eligibility for 221 (d) (3) due to dislocation by t h e government, Finkelstein said. Acting HRC director Don BoI rut reported briefly on the progress of each of the programs being financed by the city's $100,000 accelerated human relations funds. Those in progress [include a tutorial and recreational program at St. Thomas School; a work program for 31 eighth and ninth graders A n d summer orientation program for 15 seventh graders at Slauson Junior High School; the Ann Arbor Recreation Department Day Camp which has added daily to its original 120 enrollment; and the University sports clinics which attracted about 500 youngsters to its first session. The latter needed no city financing.) The Y o u t h Commission's summer employment program, II as discussed at Monday night's I -ity Council meeting, has I :ated 90 jobs but has 365 I cants. There is a partícula need for jobs suiting 14 to 16 year oids. Preoccupation with this program has left no time for the development of the HRC's job upgrading program, Assistant HRC Director Robert Hunter explained. Staff members for this program are still b e i n g sought . With the allocation of $5,000 3y the United Fund to match City Council's $5,000 for a de;ached youth w o r k e r at the Community Center, Center Director Walter Hill has extended an offer to an applicant and is awaitina a reDlv although the intensity of the housing problem is great to the individual involved, the magnitude, in numbers, is smaller"! Borut feels. "The 'city also hásl the untapped resources of the! U-M in planning the ma de il neighborhood. "Third, and most excitingj propose that the residents ofl ;he neighborhood carry out thel fear-long planning of it," hel said. The application calis for al committee of 17 persons to planl the neighborhood, 10 of whoml would be picked by the HRcI with the advice of such groupsl as welfare recipients, b 1 o c kl lubs and civil rights organiza-B ions. Although "it would be danger-l us to raise people's hopes byl ;alking the program up beforel ie grant is approved," Borut I uggested that the commission I egin now to discuss' its I tantial role in the propósed I project. Finally, the conference on 'unintended racism" proposed y People Against Racism has een set for Aug. 2 and 3, Borut aid. Other plans are indefinit Borut also described a $187,)00 Model Neighborhood gran't or which the city is applying. Ann Arbor has the potential of managing the program because j