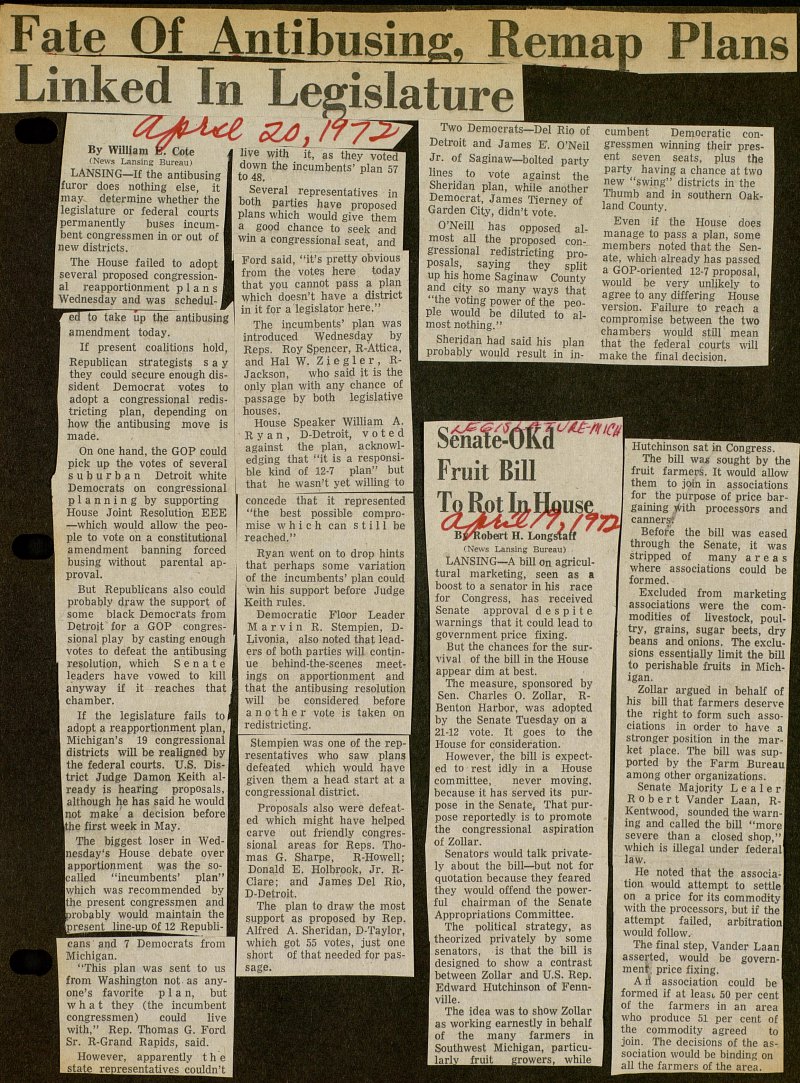 LANSING- If the antibusing [furor does nothiag else, it may determine whether the legislature or federal courts permanently buses incumbent congressmen in or out of new districts. The House failed to adopt several proposed congressional reapportionment plans Wednesday and was ed to take up the antibusin amendment today. If present coalitions hold, Republican strategists s a y they could secure enough dissident Democrat votes to adopt a congressional redistricting plan, depending on how the antibusing move is made. On one hand, the GOP could piek up the votes of several suburban Detroit white Democrats on congressional planning by supporting House Joint Resolution EEE - which would allow the people to vote on a constitutional amendment banning forced busing without parental approval. But Republicans also could probably draw the support of some black Democrats from Detroit f or a GOP congressional play by casting enough votes to defeat the antibusing resolution, which S e n a t e leaders have vowed to kill anyway if it reaches that chamber. If the legislature fails toj adopt a reapportionment plan, Michigan's 19 congressional districts will be realigned by the federal courts. U.S. 1 trict Judge Damon Keith already is hearing proposals, although he has said he would ,not make a decisión before the first week in May. The biggest loser in Wed- nesday's House debate over apportionment was the socalled "incumbents' plan" which was recommended by the present congressmen and probably would maintain the ipresent line-up of 12 cans and 7 Democrats from Michigan. "This plan was sent to us from Washington as anyone's favorite plan, but what they (the incumbent congressmen) could live with," Rep. Thomas G. Ford Sr. R-Grand Rapids, said. However, apparently the state representatives couldn't live with it, as they vote down the incumbents' plan 57 to48. Several representatives in I uoth parties have proposed plans which would give them a good chance to seek and win a congressional seat, and Ford said, "it's pretty obvious from the votes here today that you cannot pass a plan which doesn't have a district in it for a legislator here." The incumbents' plan was introduced Wednesday by Reps. Roy Spencer, R-Attica, and Hal W. Z i e g 1 e r , Jackson, who said it is the I only plan with any chance of passage by both legislative houses. I House Speaker William A. Eyan, D-Detroit, v o t e d against the plan, acknowledging that "it is a responsible kind of 12-7 plan" but that he wasn't yet willing to concede that it represented "the best possible compromise which can s t i 1 1 be reached." Ryan went on to drop hints that perhaps some variation of the incumbents' plan could win his support before Judge Keith rules. Democratie Floor Leader Marvin R. Stempien, DLivonia, also noted that leaders of both parties will continue behind-the-scenes meetings on apportionment and that the antibusing resolution will be considered before a n o t h e r vote is taken on redistricting. Stempien was one of the 1 resentatives who saw plans defeated which would have given them a head start at a congressional district. Proposals also were defeated which might have helped carve out friendly congressional areas for Reps. Thomas G. Sharpe, R-Howell; Donald E. Holbrook, Jr. RClare; and James Del Rio, D-Detroit. The plan to draw the most support as proposed by Rep. Alfred A. Sheridan, D-Taylor, which got 55 votes, just one short of that needed for passage. Two Democrats- Del Rio of Detroit and James E. O'Neil Jr. of Saginaw- bolted party lines to vote against the Sheridan plan, while another Democrat, James Tierney of Garden City, didn't vote. O'Neill has opposed almost all the proposed congressional redistricting proposals, saying they split up his home Saginaw County and city so many ways that "the voting power of the people would be düuted to almost nothing." Sheridan had said his plan probably would result in cumbent Democratie congressmen winning their present seven seats, plus the party having a chance at two new "swing" districts in the Thumb and in southern Oakland County. Even if the House does manage to pass a plan, some members noted that the Senate, wlüch already has passed a GOP-oriented 12-7 proposal, would be very unlikely to agree to any differing House version. Failure to reach a compromise between the two chambers would still mean that the federal courts will make the final decisión.