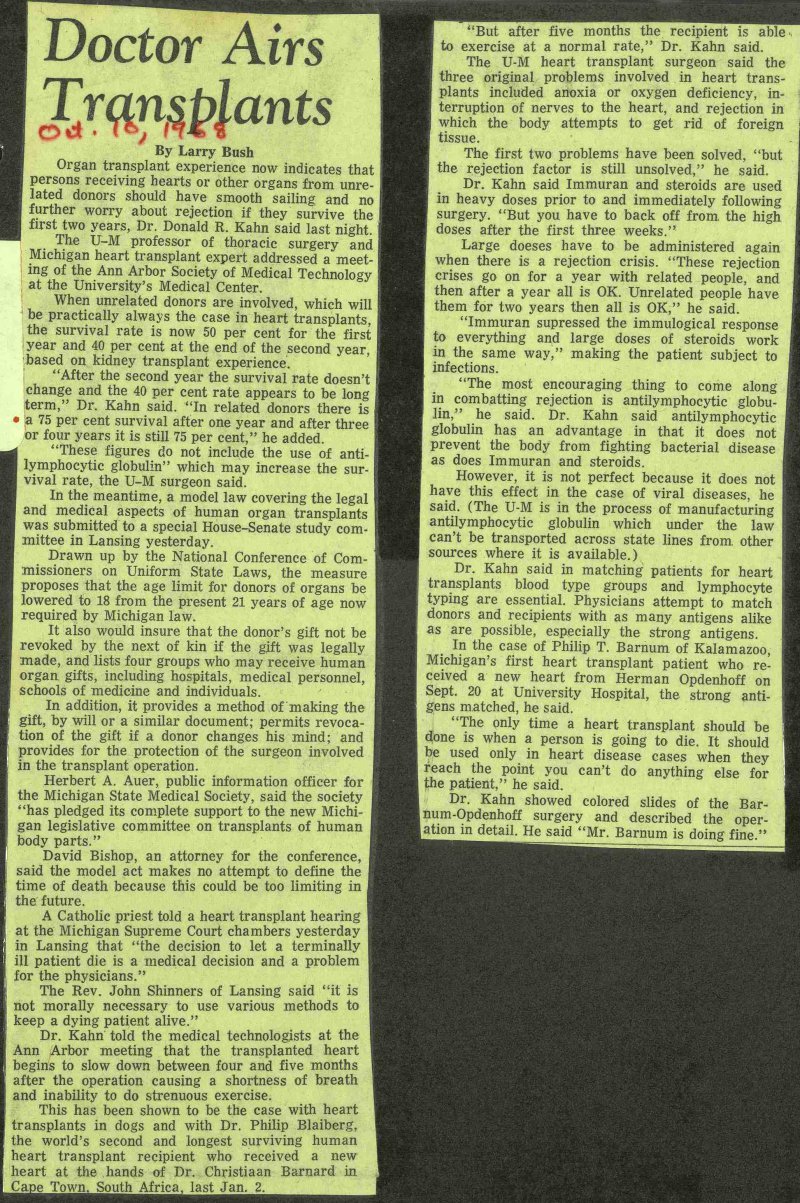 Organ transplant experience now indicates that persons receiving hearts or other organs from unrelated donors should have smooth sailing and no further worry about rejection if they survive the first two years, Dr. Donald R. Kahn said last night. The U-M professor of thoracie surgery and Michigan heart transplant expert addressed a meeting of the Ann Arbor Society of Medical Technology at the University's Medical Center. When unrelated donors are involved, which will be practically always the case in heart transplants, the survival rate is now 50 per cent for the first year and 40 per cent at the end of the second year, I based on kidney transplant experience. "After the second year the survival rate doesn't change and the 40 per cent rate appears to be long term," Dr. Kahn said. "In related donors there is a 75 per cent survival after one year and after three or four years it is still 75 per cent," he added. "These figures do not include the use of 1 lymphocytic globulin" which may increase the 1 vival rate, the U-M surgeon said. In the meantime, a model law covering the legal I and medical aspects of human organ transplants was submitted to a special House-Senate study committee in Lansing yesterday. Drawn up by the National Conference of Commissioners on Uniform State Laws, the measure proposes that the age limit for donors of organs be lowered to 18 from the present 21 years of age now required by Michigan law. It also would insure that the donor's gift not be revoked by the next of kin if the gjft was legally made, and lists four groups who may receive human organ gifts, including hospitals, medical personnel, schools of medicine and individuáis. In addition, it provides a method of making the gift, by will or a similar document; permits revocation of the gift if a donor changes his mind; and pro vides for the proteetion of the surgeon involved in the transplant operation. Herbert A. Auer, public information officer for the Michigan State Medical Society, said the society "has pledged its complete support to the new i gan legislative committee on transplants of human body parts." David Bishop, an attorney for the conference, I said the model act makes no attempt to define the I time of death because this could be too limiting in 1 the future. A Catholic priest told a heart transplant hearing at the Michigan Supreme Court chambers yesterday in Lansing that "the decisión to let a terminally ill patiënt die is a medical decisión and a problem for the physicians." The Rev. John Shinners of Lansing said "it is not morally necessary to use various methods to keep a dying patiënt alive." Dr. Kahn told the medical technologjsts at the Ann Arbor meeting that the transplanted heart begins to slow down between four and five months after the operation causing a shortness of breath and inability to do strenuous exercise. This has been shown to be the case with heart transplants in dogs and with Dr. Philip Blaiberg, the world's second and longest surviving human heart transplant recipiënt who received a new heart at the hands of Dr. Christiaan Barnard in Cape Town. South África, last Jan. 2. "But after five months the recipiënt is able to exercise at a normal rate," Dr. Kahn said. The U-M heart transplant surgeon said the three original problems involved in heart transplants included anoxia or oxygen deficiency, interruption of nerves to the heart, and rejection in which the body attempts to get rid of foreign tissue. The first two problems have been. solved, "but the rejection factor is still unsolved," he said. Dr. Kahn said Immuran and steroids are used in heavy doses prior to and immediately following surgery. "But you have to back off f rom the high doses after the first three weeks." Large doeses have to be administered again when there is a rejection crisis. "These rejection crises go on for a year with related people, and then after a year all is OK. Unrelated people have them for two years then all is OK," he said. "Immuran supressed the immulogical response to everything and large doses of steroids work in the same way," making the patiënt subject to infections. "The most encouraging thing to come along in combatting rejection is antilymphocytic globulin," he said. Dr. Kahn said antilymphocytic globulin has an advantage in that it does not prevent the body from fighting bacterial disease i as does Immuran and steroids. However, it is not perfect because it does not have this effect in the case of viral diseases, he said. (The U-M is in the process of manufacturing antilymphocytic globulin which under the law can't be transported across state lines from other sources where it is available.) Dr. Kahn said in matching patients for heart transplants blood type groups and lymphocyte typing are essential. Physicians attempt to match donors and recipients with as many antigens alike as are possible, especially the strong antigens. In the case of Philip T. Barnum of Kalamazoo, Michigan's first heart transplant patiënt who received a new heart from Herman Opdenhoff on Sept. 20 at University Hospital, the strong antigens matched, he said. "The only time a heart transplant should be done is when a person is going to die. It should be used only in heart disease cases when they reach the point you can't do anything else for the patiënt," he said. Dr. Kahn showed colored slides of the Barnum-Opdenhoff surgery and described the operation m detail. He said "Mr. Barnum is doing fine "