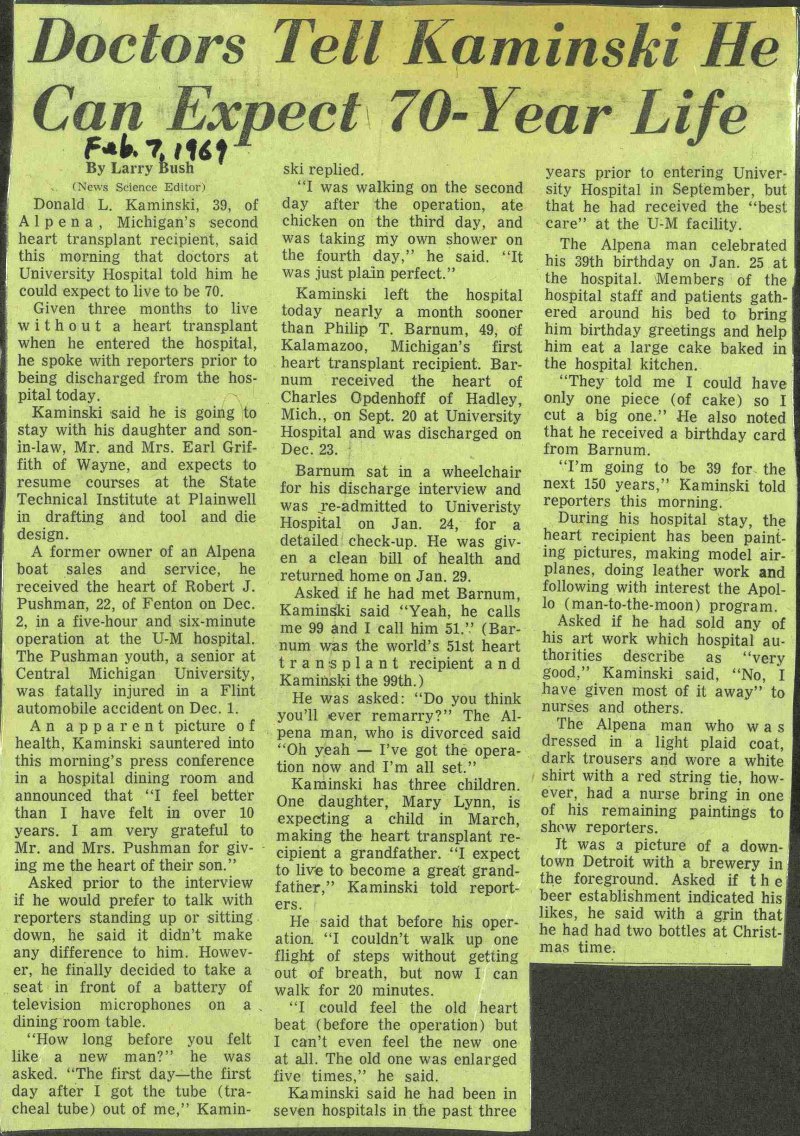 Donald L. Kaminski, 39, of Alpena, Michigan's second heart transplant recipiënt, said this morning that doctors at University Hospital told Mm he could expect to live to be 70. Given three months to live without a heart transplant when he entered the hospital, he spoke with reporters prior to being discharged from the hospital today. Kaminski said he is going to stay with his daughter and son-in-law, Mr. and Mrs. Earl Griffith of Wayne, and expects to resume courses at the State Technical Institute at Plainwell in drafting and tooi and die design. A former owner of an Alpena boat sales and service, he received the heart of Robert J. Pushman, 22, of Fenton on Dec. 2, in a five-hour and six-minute operation at the U-M hospital. The Pushman youth, a senior at Central Michigan University, was fatally injured in a Flint automobile accident on Dec. 1. An apparent picture o f health, Kaminski sauntered into this morning' s press conference in a hospital dining room and announced that "I feel better than I have feit in over 10 years. I am very grateful to Mr. and Mrs. Pushman for - ing me the heart of their son." Asked prior to the interview if he would prefer to talk with reporters standing up or sitting down, he said it didn't make any difference to him. However, he finally decided to take a seat in front of a battery of televisión microphones on a . dining room table. "How long bef ore you feit like a new man?" he was asked. "The first day- the first day after I got the tube (tracheal tube) out of me," ski replied. "I was walking on the second day after the operation, ate chicken on the third day, and was taking my own shower on the fourth day," he said. "It was just plaïn perfect." Kaminski left the hospital today nearly a month sooner than Philip T. Barnum, 49, of Kalamazoo, Michigan's first heart transplant recipiënt. Barnum received the heart of Charles Opdenhoff of Hadley, Mich., on Sept. 20 at University Hospital and was discharged on Dec. 23. Barnum sat in a wheelchair for his discharge interview and was jre-admitted to Univeristy Hospital on Jan. 24, for a detailed check-up. He was given a clean bill of health and returned home on Jan. 29. Asked if he had met Barnum, Kaminski said "Yeah, he calis me 99 and I cali him 51." (Barnum was the world's 51st heart transplant recipiënt and Kaminski the 99th.) He was asked: "Do you think you'll ever remarry?" The Alpena man, who is divorced said "Oh yeah - Pve got the operation now and I'm all set." Kaminski has three children. One daughter, Mary Lynn, is expecting a child in March, making the heart transplant recipiënt a grandfather. "I expect to live to become a greát grandfather," Kaminski told reporters. He said that before his operation. "I couldn't walk up one flight of steps without getting out of breath, but now I can walk for 20 minutes. "I could feel the old heart beat (before the operation) but I can't even feel the new one at all. The old one was enlarged five times," he said. Kaminski said he had been in seven hospitals in the past three years prior to entering University Hospital in September, but that he had received the "best care" at the U-M facility. The Alpena man celebrated his 39th birthday on Jan. 25 at the hospital. Members of the hospital staff and patients gathered around his bed to bring him birthday greetings and help him eat a large cake baked in the hospital kitchen. "They told me I could have only one piece (of cake) so I cut a big one." He also noted that he received a birthday card from Barnum. 'Tm going to be 39 for. the next 150 years," Kaminski told reporters this morning. During his hospital stay, the heart recipiënt has been painting pictures, making model airplanes, doing leather work and following with interest the Apollo (man-to-the-moon) program. Asked if he had sold any of his art work which hospital authoiities describe as "very good." Kaminski said, "No, I have given most of it away" to nurses and others. The Alpena man who was dressed in a light plaid coat, dark trousers and wore a white shirt with a red string tie, however, had a nurse bring in one of his remaining paintings to show reporters. It was a picture of a downtown Detroit with a brewery in the foreground. Asked if the] beer establishment indicated his likes, he said with a grin that he had had two bottles at Christmas time.