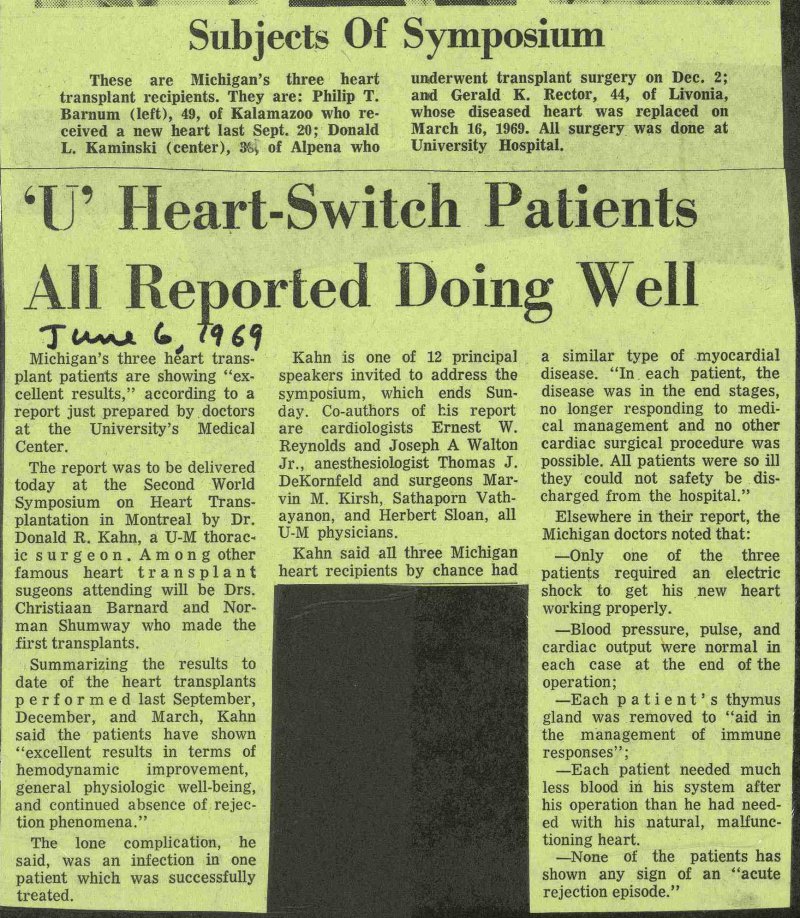 Michigan's three heart transplant patients are showing "excellent results," according to a report just prepared by doctors at the University's Medical Center. The report was to be delivered today at the Second World Symposium on Heart Transplantation in Montreal by Dr. Donald R. Kahn, a U-M thoracie surgeon. Among other famous heart transplant sugeons attending will be Drs. Christiaan Barnard and Norman Shumway who made the first transplants. Summarizing the results to date of the heart transplants performed last September, December, and March, Kahn said the patients have shown "excellent results in terms of hemodynamic improvement, general physiologic well-being, and continued absence of rejection phenomena." The lone complication, he said, was an infection in one patiënt which was successfully treated. Kahn is one of 12 principal speakers invited to address the symposium, which ends Sunday. Co-authors of bis report are cardiologists Ernest W. Reynolds and Joseph A Walton Jr., anesthesiologist Thomas J. DeKornfeld and surgeons Marvin M. Kirsh, Sathaporn Vathayanon, and Herbert Sloan, all U-M physicians. Kahn said all three Michigan heart recipients by chance had a similar type of myocardial disease. "In each patiënt, the disease was in the end stages, no longer responding to medical management and no other cardiac surgical procedure was possible. All patients were so ill they could not safety be discharged from the hospital." Elsewhere in their report, the Michigan doctors noted that: - Only one of the three patients required an electrie shock to get his new heart working properly. - Blood pressure, pulse, and cardiac output were normal in each case at the end of the operation; -Each patient's thymus gland was removed to "aid in the management of immune responses"; -Each patiënt needed much less blood in his system after his operation than he had needed with his natural, malfunctioning heart. -None of the patients has shown any sign of an "acute rejection episode."