Rector Is Receiving His Third Heart 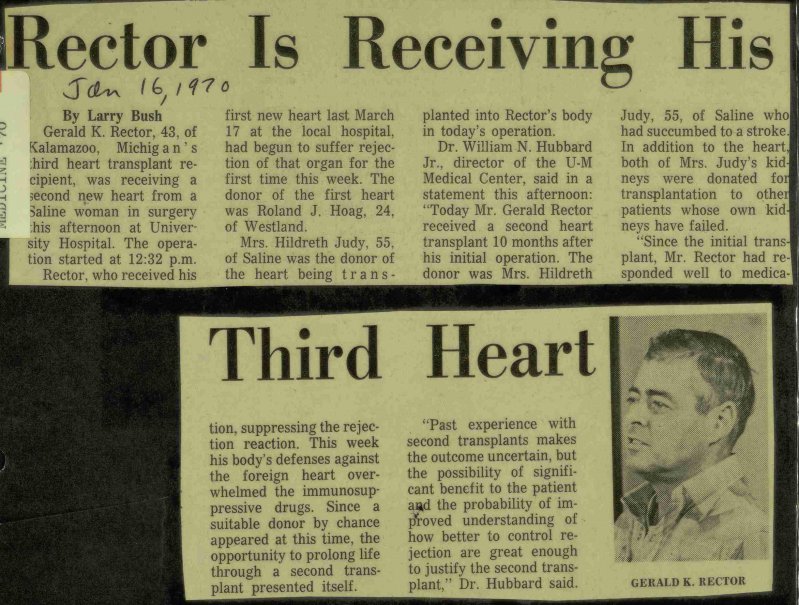 Gerald K. Rector, 43, of ECalamazoo, Michig a n ' s :hird heart transplant recipiënt, was receiving a jecond new heart from a Saline woman in surgery ;his afternoon at University Hospital. The operation started at 12:32 p.m. Rector, who received his first new heart last March 17 at the local hospital, had begun to suffer rejection of that organ for the first time this week. The donor of the first heart was Roland J. Hoag, 24, of Westland. Mrs. Hildreth Judy, 55, of Saline was the donor of the heart being planted into Rector's body in today's operation. Dr. William N. Hubbard Jr., director of the U-M Medical Center, said in a statement this afternoon: "Today Mr. Gerald Rector received a second heart transplant 10 months af ter his initial operation. The donor was Mrs. Hildreth Judy, 55, of Saline who had succumbed to a stroke.1 In addition to the heartj both of Mrs. Judy's kid-l neys were donated fon transplantation to otheij patients whose own kid-l neys have failed. "Since the initial trans-I plant, Mr. Rector had responded well to tion, suppressing the rejection reaction. This week his body's defenses against the foreign heart overwhelmed the immunosuppressive drugs. Since a suitable donor by chance appeared at this time, the opportunity to prolong life through a second transplant presented itself. "Past experience with second transplants makes the outcome uncertain, but the possibility of significant benefit to the patiënt anti the probability of improved understanding of how better to control rejection are great enough to justify the second transplant," Dr. Hubbard said.