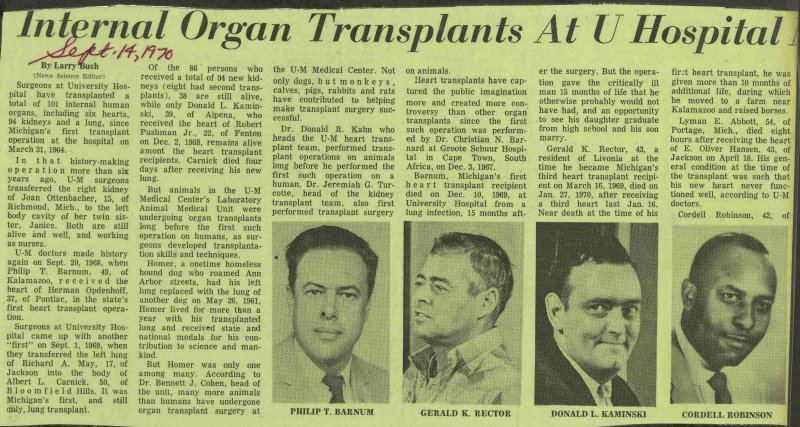 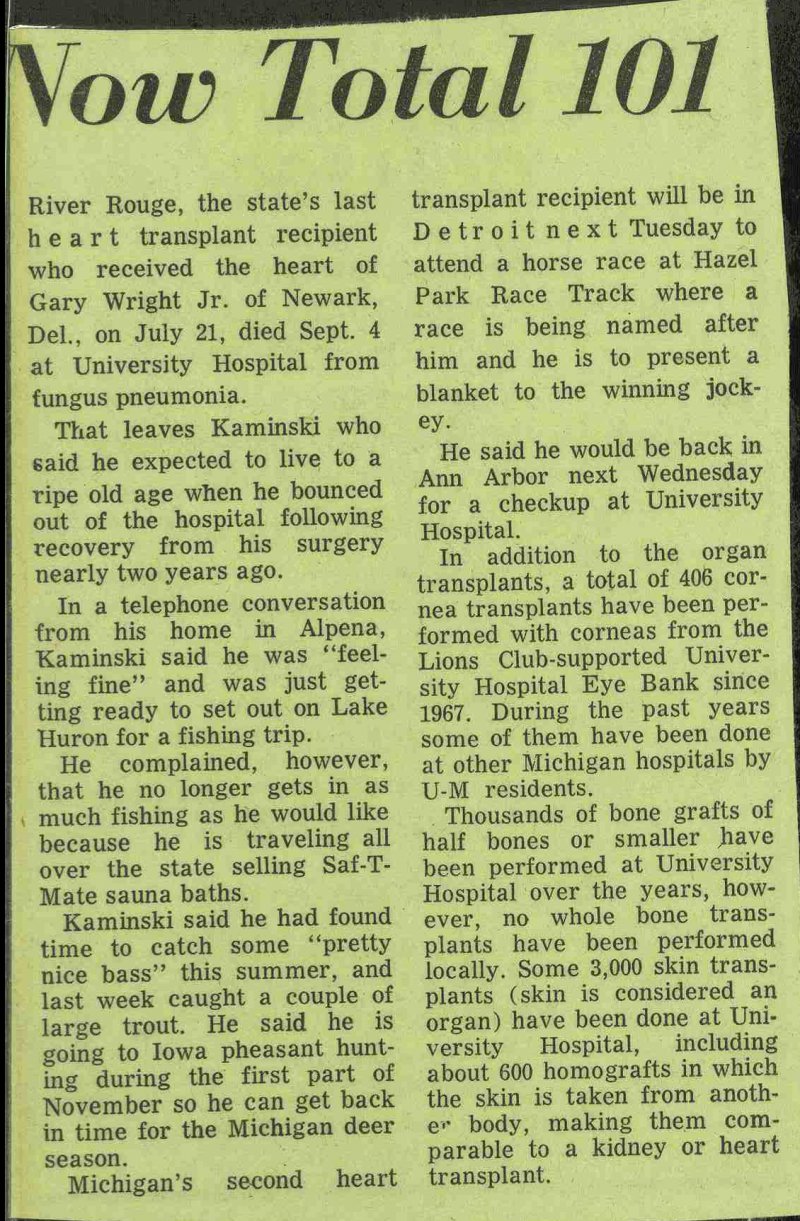 Surgeons at University Hospital have transplanted a total of 101 internal human organs, including six hearts, 94 kidneys and a lung, since Michigan's first transplant operation at the hospital on Maren 31, 1964. In t h a t history-making operation more than six years ago, U-M surgeons transferred the right kidney of Joan Ottenbacher, 15, of Richmond, Mich., to the Ieft body cavity of her twin sister, Janice. Both are still alive ánd well, and working as nurses. U-M doctors made history again on Sept. 20, 1968, when Philip T. Barnum, 49, of Kalamazoo, received the heart of Herman Opdenhoff, 37, of Pontiac, in the state's first heart transplant operation. Surgeons at University Hospital came up with another "first" on Sept. 1, 1969, when they transferred the left lung of Richard A. May, 17, of Jackson into the body of Albert L. Carnick, 50, of Bloomfield Hills. It was Michigan's first, and still only, lung transplant. Of the 86 persons who received a total of 94 new kidneys (eight had second transplants), 38 are still alive, while only Donald L. Kaminski, 39, of Alpena, who received the heart of Robert Pushman Jr., 22, of Fenton on Dec. 2, 1968, remains alive amont the heart transplant recipients. Carnick died four days after receiving his new lung. But animáis in the U-M Medical Center's Laboratory Animal Medical Unit were undergoing organ transplants long before the first such operation on humans, as surgeons developed transplantation skills and techniques. Homer, a onetime homeless hound dog who roamed Ann Arbor streets, had his left lung replaced with the lung of another dog on May 26, 1961, Homer lived for more than a year with his transplanted lung and received state and national medals for his contribution to science and mankind. But Homer was only one among many. According to Dr. Bennett J. Cohen, head of the unit, many more animáis than humans have undergone organ transplant surgery at the U-M Medical Center. Not only dogs, butmonkeys, calves, pigs, rabbits and rats have contributed to helping make transplant surgery successful. Dr. Donald R. Kahn who heads the U-M heart transplant team, performed transplant operations on animáis long before he performed the first such operation on a human. Dr. Jeremiah G. Turcotte, head of the kidney transplant team, also first performed transplant surgery on animáis. Heart transplants have captured the public imagination more and created more controversy than other organ transplants since the first such operation was performed by Dr. Christian N. Barnard at Groóte Schuur Hospital in Cape Town, South África, on Dec. 3, 1967. Barnum, Michigan's first heart transplant recipiënt died on Dec. 10, 1969, at University Hospital from a lung infection, 15 months er the surgery. But the operation gave the critically ill man 15 months of life that he otherwise probably would not have had, and an opportunity to see his daughter gradúate from high school and his son marry. Gerald K. Rector, 43, a resident of Livonia at the time he became Michigan's third heart transplant recipiënt on March 16, 1969, died on Jan. 27, 1970, after receiving a third heart last Jan. 16. Near death at the time of his fir:t heart transplant, he was given more than 10 months of additional life, during which he moved to a farm near Kalamazoo and raised horses. Lyman E. Abbott, 54, of Portage, Mich., died eight hours after receiving the heart of E. Oliver Hansen, 43, of Jackson on April 18. His general condition at the time of the transplant was such that his new heart never functioned well, according to U-M doctors. Cordell Robinson, 42, of I River Rouge, the state's last heart transplant recipiënt who received the heart of Gary Wright Jr. of Newark, Del., on July 21, died Sept. 4 at University Hospital from fungus pneumonia. That leaves Kaminski who said he expected to live to a ripe oíd age wlien he bounced out of the hospital following recovery from his surgery nearly two years ago. In a telephone conversation from his home in Alpena, Kaminski said he was "feeling fine" and was just getting ready to set out on Lake Hurón for a fishing trip. He complained, however, that he no longer gets in as much fishing as he would like because he is traveling all over the state selling Saf-TMate sauna baths. Kaminski said he had found time to catch some "pretty nice bass" this summer, and last week caught a couple of large trout. He said he is going to Iowa pheasant hunting during the first part of November so he can get back in time for the Michigan deer season. Michigan's second heart transplant recipiënt will be in I Detroit next Tuesday to attend a horse race at Hazel Park Race Track where a race is being named after him and he is to present a blanket to the winning jockey. He said he would be back in Ann Arbor next Wednesday for a checkup at University Hospital. In addition to the organ transplants, a total of 406 cornea transplants have been performed with corneas from the Lions Club-supported University Hospital Eye Bank since 1967. During the past years some of them have been done at other Michigan hospitals by U-M residents. Thousands of bone grafts of half bones or smaller Jiave been performed at University Hospital over the years, however, no whole bone transplants have been performed locally. Some 3,000 skin transplants (skin is considered an organ) have been done at University Hospital, including about 600 homografts in which the skin is taken from anothe- body, making them comparable to a kidney or heart transplant.