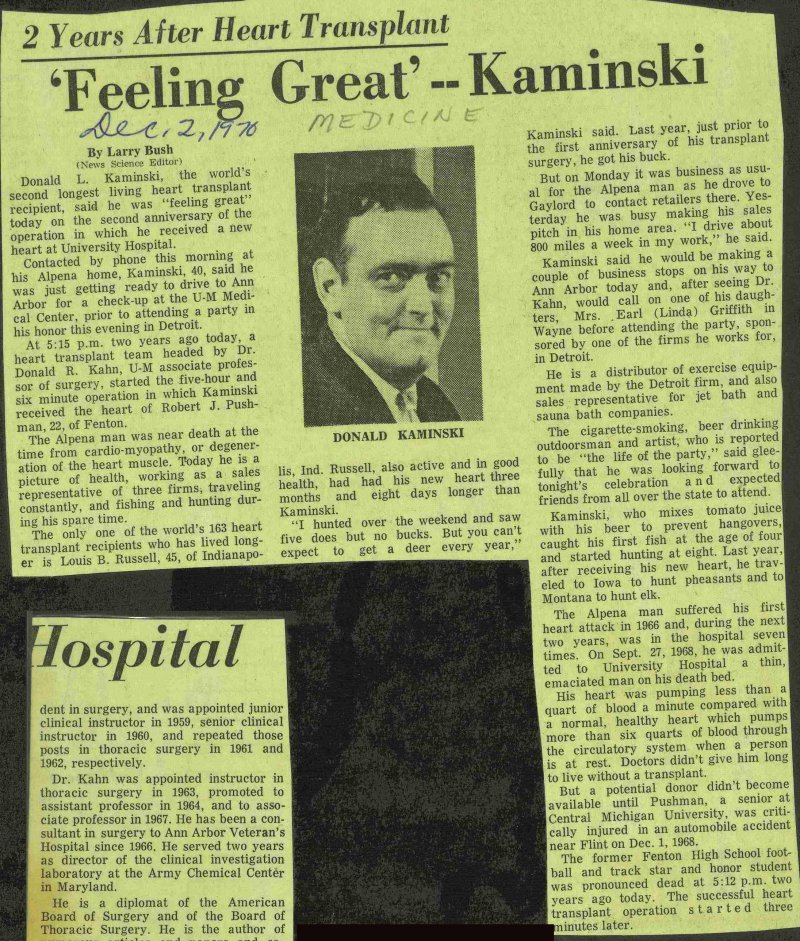 Donald L. Kaminski, the worlfl s second longest living heart transplant recipiënt, said he was ' feelmg great today on the second anniversary of the operltion in which he received a new heart at University Hospital. Contacted by phone tfais . his Alpena home, Kaminski 40, said he was just getting ready to drive , to Ann Arbor for a check-up at the U-M Medi1 Center, prior to attending a party in his honor this evening in Detroit. At 5:15 p.m. two years ago , today , a heart transplant team headed by Dr. Donald R. Kahn, U-M associate professor of surgery, started the tive-hou and %ix minute operation in which Kaminski received the heart of Robert J. PushThSenrrnwasneardeathatthe time from cardio-myopathy, or degeneration of the heart muscle. Today he is a Stare of health, working as a sales l Spiesentative of three firms, travelmg constantly, and fishing and hunting duronronrof the world's163 heart lis, Ind. Russell, also active and ín good heklth, had had nis new heart three months and eight days longer than K''TÏuknted over the weekend and saw five does but no bucks. But you cant expect to get a deer every year, Kaminski said. Last year juri .prior to the first anniversary of his transpiam surgery, he got his buck. But on Mondayit was business as usUq al for the Alpena man as he drove to Gaylord to contact retaflers there. Yesterday he was busy making his sales Sin his home area. "I drive about L Ues a week in my work," he sa!d. Kaminski said he would be making a coupte of business stops on bis way to Inn Arbor today and, aftei ■ seeing Dr. Kahn, would cali on one of his d ogbters Mrs. Earl (Linda) Griffith in Wayne before attending the party sponsoreSby one of the firms he works for, in Detroit. He is a distributor of exercise equipment made by the Detroit firm and also sales representative for jet bath and sauna bath compames. The cigarette-smoking, beer drinkmg outdoorsman and artist, who is reportad to be "the life of the party," said gleefullv that he was looking forward to onigh's celebration and expected friends from aU over the state to attend. Kaminski, who mixes tomate juice with his beer to prevent hangovers Taught his first fish at the age of four and started hunting at eight. Last year, after receiving his new heart he trayeled to Iowa to hunt pheasants and to Montana to hunt elk. The Alpena man suffered his ürstl heart attack in 1966 and, during the nextl two years, was in the hospital sevenl Smesy OnSept. 27, 1968, he was adrróted to University Hospital a thm.l emaciated man on his death bed. His heart was pumping less than a auart of blood a minute compared with a normal, healthy heart which pumps imore than six quarts of blood through the circulatory system when a person is at rest. Doctors didn't give him long I to live without a transplant. I But a potential donor didn't become lavailable untü Pushman, a senior at I Central Michigan University, was critiIcally injured in an automobile accident InearFlintonDec. 1,1968. The former Fenton High School footIball and track star and honor student ■ was pronounced dead at 5:12 p.m two ■ years ago today. The successful heart ■ transplant operation started three tninutes later. -