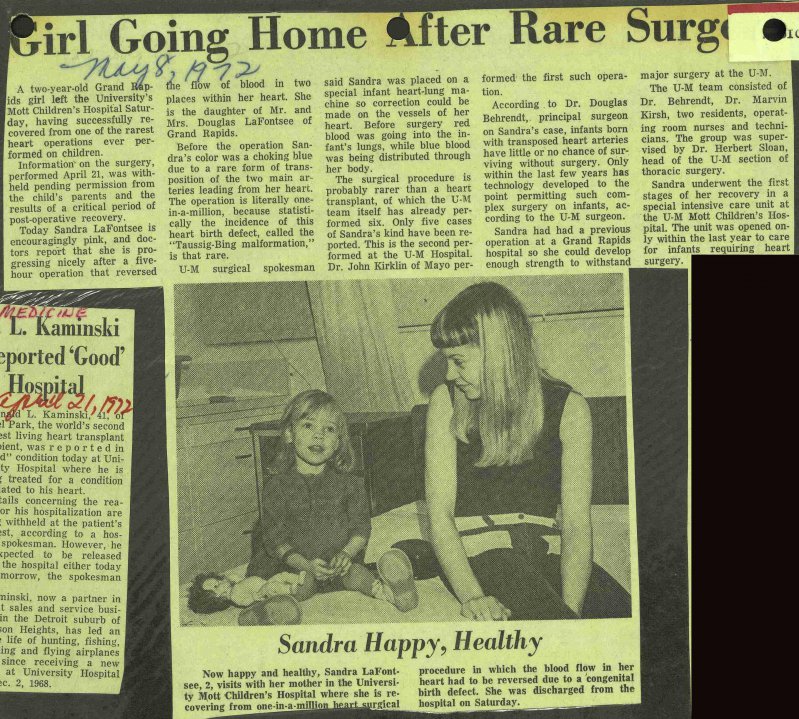 A two-year-old Grand Rapids girl left the University's Mott Children's Hospital Saturday, having successfully recovered from one of the rarest heart operations ever performed on children. Information" on the surgery, performed April 21, was withheld pending permission írom the child's parents and the results of a critical period of post-operative recovery. Today Sandra LaFontsee is encouragingly pink, and doctors report that she is progressing nicely after a five hour operation that reversed Uhe flow of blood in two places within her heart. She is the daughter of Mr. and Mrs. Douglas LaFontsee of Grand Rapids. Before the operation Sandra's color was a choking blue due to a rare form of transposition of the two main arteries leading from her hearfc. The operation is literally onein-a-miUion, because statistically the incidence of this heart birth defect, called the "Taussig-Bing malformation," is that rare. U-M surgical spokesman said Sandra was placed on a special infant heart-lung machine so correction could be made on the vessels of her heart. Before surgery red blood was going üito the infanta lungs, while blue blood was being distributed through her body. The surgical procedure is probably rarer than a heart transplant, of which the U-M team itself has already performed six. Only five cases of Sandra's kind have been reported. This is the second performed at the U-M Hospital. Dr. John Kirklin of Mayo formed the first such operation. According . to Dr. Douglas Behrendt, principal surgeon on Sandra's case, infants born with transposed heart arteries have little or no chance of surviving without surgery. Only within the last few years has technology developed to the point permitting such complex surgery on infants, according to the U-M surgeon. Sandra had had a previous operation at a Grand Rapids hospital so she could develop enough strength to withstand major surgery at the U-M. The U-M team consisted of Dr. Behrendt, Dr. Marvin Kirsh, two residents, operating room nurses and technicians. The group was supervised by Dr. Herbert Sloan, head of the U-M section of thoracic surgery. Sandra underwent the first stages of her recovery in a special intensive care unit at the U-M Mott Children's Hospital. The unit was opened only within the last year to care for infants requiring heart surgery.