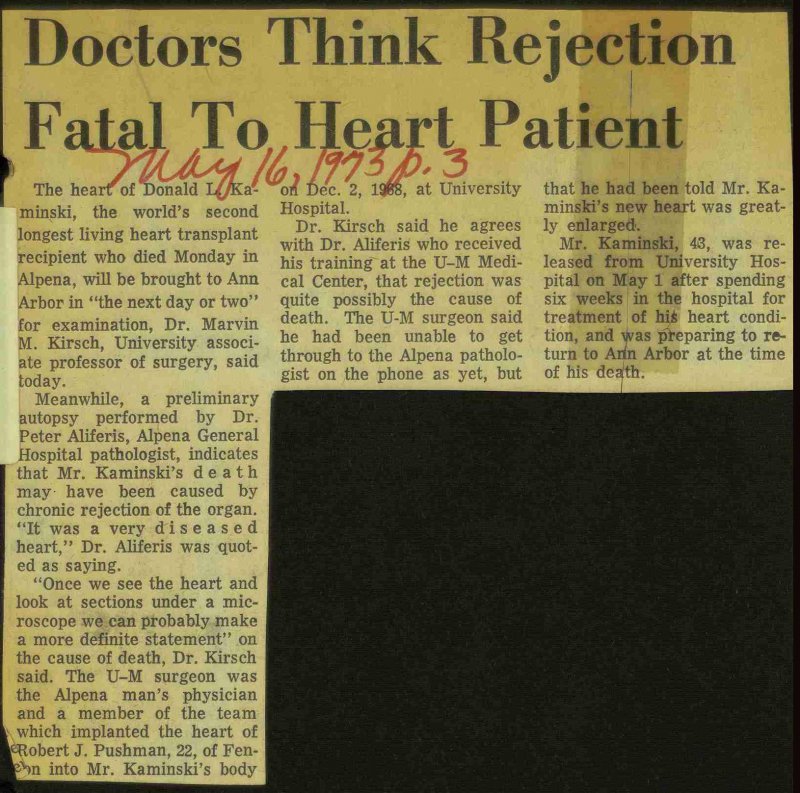 The heart of Donald L. Kaminski, the world's second longest living heart transplant recipiënt who died Monday in Alpena, will be brought to Ann Arbor in "the next day or two" for examination, Dr. Marvin M. Kirsch, University associate professor of surgery, said today. Meanwhile, a preliminary autopsy performed by Dr. Peter Aliferis, Alpena General Hospital pathologist, indicates that Mr. Kaminski's death may have been caused by chronic rejection of the organ. "It was a very diseased heart," Dr. Aliferis was quoted as saying. "Once we see the heart and look at sections under a microscope we can probably make a more definite statement" on the cause of death, Dr. Kirsch said. The U-M surgeon was the Alpena man's physician and a member of the team which implanted the heart of Robert J. Pushman, 22, of FenpSn into Mr. Kaminski's body oií Dec. 2, 19B8, at University Hospital. Dr. Kirsch said he agrees with Dr. Aliferis who received his training" at the U-M Medical Center, that rejection was quite possibly the cause of death. The U-M surgeon said he had been unable to get through to the Alpena pathologist on the phone as yet, but that he had been told Mr. Kaminski's new heart was greatly enlarged. Mr. Kaminski, 43, was released from University Hospital on May 1 after spending six weeks in the hospital for treatment of Mi heart condition, and vas preparing to return to Ann Arbor at the time of his deth.