Adult Center: Will It Close? 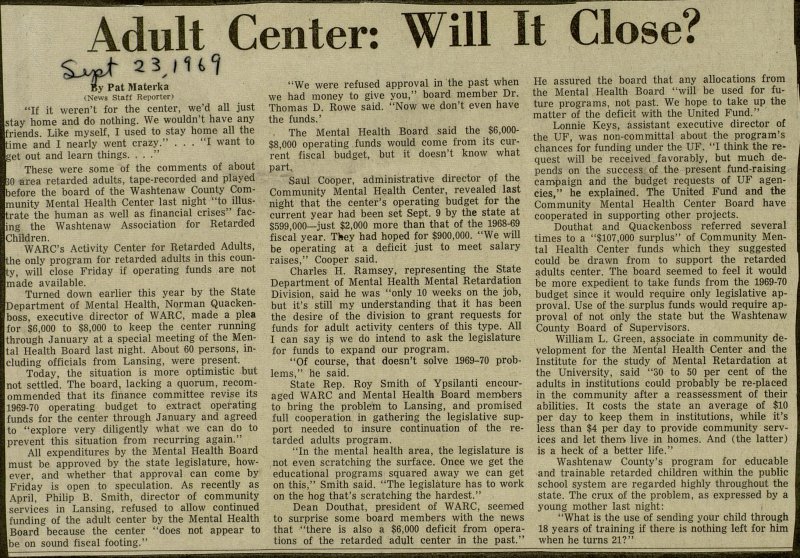 "If it weren't for the center, we'd all just stay home and do nothing. We wouldn't have any Eriends. Like myself, I used to stay home all the time and I nearly went crazy." ... "I want to get out and learn things. . . ." These were some of the comments of about 30 area retarded adults, tape-recorded and played before the board of the Washtenaw County Community Mental Health Center last night "to illustrate the human as well as financial crises" facing the Washtenaw Association for Retarded Children. WARC's Activity Center for Retarded Adults, Lhe only program for retarded adults in this county, will close Friday if operating funds are not made available. Turned down earlier this year by the State Department of Mental Health, Norman Quackenboss, executive director of WARC, made a plea for $6,000 to $8,000 to keep the center running through January at a special meeting of the Mental Health Board last night. About 60 persons, including officials from Lansing, were present. Today, the situation is more optimistic but not settled. The board, lacking a quorum, recomommended that its finance committee revise its 1969-70 operatmg budget to extract operating funds for the center through January and agreed to "explore very diligently what we can do to prevent this situation from recurring again." All expenditures by the Mental Health Board must be approved by the state legislature, however, and whether that approval can come by Friday is open to speculation. As recently as April, Philip B. Smith, director of community services in Lansing, refused to allow continued funding of the adult center by the Mental Health Board because the center "does not appear to be on sound fiscal footing." 'We were refused approval in the past when we had money to give you," board member Dr. Thomas D. Rowe said. "Now we don't even have the funds.' . The Mental Health Board said the $6,000$8,000 operating funds would come from its current fiscal budget, but it doesn't know what part. Saúl Cooper, administrative director pf the Community Mental Health Center, revealed last night that the center's operating budget for the current year had been set Sept. 9 by the state at $599 000- just $2,000 more than that of the 1968-69 fiscal year. Tfeey had hoped for $900,000. "We will be operating at a deficit just to meet salary raises," Cooper said. Charles H. Ramsey, representing the State Department of Mental Health Mental Retardation División, said he was "only 10 weeks on the job, but it's still my understanding that it has been the desire of the división to grant requests for funds for adult activity centers of this type. All I can say is we do intend to ask the legislature for funds to expand our program. "Of course, that doesn't solve 1969-70 problems," he said. State Rep. Roy Smith of Ypsilanti encouraged WARC and Mental Health Board members to bring the problem to Lansing, and promised full cooperation in gathering the legislative support needed to insure continuation of the retarded adults program. "In the mental health area, the legislature is not even scratching the surface. Once we get the educational programs squared away we can get on this," Smith said. "The legislature has to work on the hog that's scratching the hardest." Dean Douthat, president of WARC, seemed to surprise some board members with the news that "there is also a $6,000 deficit from operations of the retarded adult center in the past." He assured the board that any allocations from the Mental Health Board "will be used for future programs, not past. We hope to take up the matter of the deficit with the United Fund." Lonnie Keys, assistant executive director of the UF, was non-committal about the program's chances for funding under the UF. "I think the request will be received favorably, but much depends on the success of the present fund-raising campaign and the budget requests of UF agencies," he explained. The United Fund and the Community Mental Health Center Board have cooperated in supporting other projects. Douthat and Quackenboss referred several times to a "$107,000 surplus" of Community Mental Health Center funds which they suggested could be drawn from to support the retarded adults center. The board seemed to feel it would be more expedient to take funds from the 1969-70 budget since it would require only legislative approval. Use of the surplus funds would require approval of not only the state but the Washtenaw County Board of Supervisors. William L. Green, associate in community development for the Mental Health Center and the Institute for the study of Mental Retardation at the University, said "30 to 50 per cent of the adults in institutions could probably be re-placed in the community after a reassessment of their abilities. It costs the state an average of $10 per day to keep them in institutions, while it's less than $4 per day to provide community services and let them live in homes. And (the latter) is a heek of a better life." Washtenaw County's program for educable and trainable retarded children within the public school system are regarded highly throughout the state. The crux of the problem, as expressed by a young mother last night: "What is the use of sending your child through 18 years of training if there is nothing left for him when he turns 21?" i